After growing up poor, a Premier League star corners U.K. into feeding its hungry 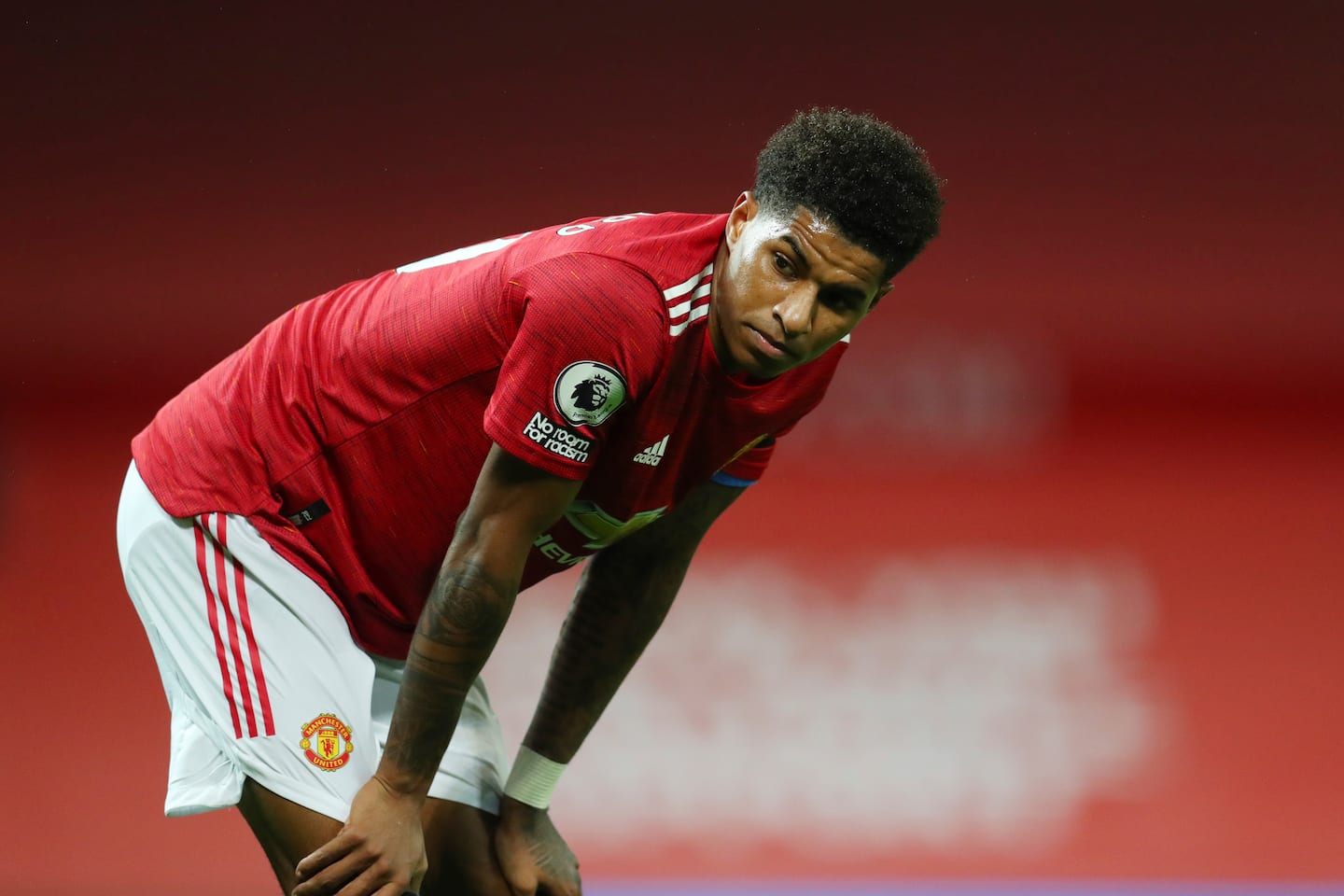 In the endearing stretched-vowels accent of his native Manchester, and with great care, Rashford explained his mission: to combat food poverty. In a quiet way, what he was saying was radical. “It’s not only the food that needs changing; it’s the structure of the whole support system,” he said. “The current structure — it doesn’t work.”

Rashford, 23, is an ascendant star for United. Just last month, facing Paris Saint-Germain in the Champions League, he cannoned in a joyful, last-gasp winner; he followed that by recording a hat trick against RB Leipzig in a breezy 16 minutes. But his 2020 has been dominated by off-the-pitch action. This year, repeatedly, Rashford has faced off with the British government.

In June, the ruling Conservative Party, also known as the Tories, planned to end a government plan that provided 15 British pounds per week in meal vouchers for families in need. By relaying his own experiences with childhood hunger, Rashford created a groundswell of anger with the decision.

“My mum worked full-time, earning the minimum wage, to make sure we always had a good evening meal on the table, but it was not enough,” he wrote in an open letter to government MPs. “The system was not built for families like mine to succeed, regardless of how hard my mum worked.”

Within days, Prime Minister Boris Johnson pulled a U-turn on the voucher plan, agreeing to fund it through the summer holidays. And Rashford instantly went from star young footballer to something much more interesting.

In the YouTube comments section to rap songs shouting out Rashford, fans said, “Who’s here after Marcus Rashford bodied the government?” In WhatsApp group chats, even Londoners who hate Manchester United joked, “Any defender that tackles Rashford is a Tory.” On Instagram, teammate Paul Pogba dubbed him the “Prince of England.”

Jurgen Klopp, who coaches United’s eternal rival Liverpool, summed it all up well: “In a time when people who are really in charge of something don’t show any signs of proper leadership, a boy grown up in difficult circumstances, blessed with a sensational talent … never forgot his roots.”

In Rashford’s campaign, there are shades of traditional athlete activism. Like Colin Kaepernick, he has managed to create a passionate national conversation. Like mental health advocates Royce White and Kevin Love, he’s fighting a stigma by discussing it.

What sets him apart are his demands for concrete change. In September, alongside major supermarket chains and charities Food Foundation and FareShare, Rashford formed a Child Food Poverty Task Force to advocate for key policies outlined in the National Food Strategy, a report commissioned by the government but not yet acted upon. These policies would both expand the number of children supported by the voucher plan and increase the value of certain vouchers.

Paul Vallely, author of “Philanthropy: From Aristotle to Zuckerberg,” said Rashford “is in the particular tradition of British philanthropy which goes back to the Enlightenment.” Vallely said the original philanthropists, such as 18th-century prison reformer John Howard, functioned under the “cult of sensibility.” It was the philanthropist as “agitator, rather than donor.”

Rashford is obsessive about community input. He maintains contact with families through emails, phone calls and FaceTime chats. “I don’t want people to think, ‘This guy’s got the answers,’ ” he said. “I have ideas that have come from the families. I’ve just been the voice of what they want.”

Growing up relying on free school meals, Rashford never considered the role of government support in his life. “A lot of people in my community were going through the same day-to-day struggles that we were,” he said. “I thought, ‘This is what the world’s like.’ ”

At 11, Rashford joined Manchester United’s youth academy. His mother, Melanie, pushed him to join the academy a year early specifically because she knew he would be provided meals. “That’s when I understood how much we were struggling compared to other kids,” he said. “It was so shocking, really.”

Now his mother has become such a symbol of his food poverty campaign that FareShare, with Rashford’s approval, named a new Manchester facility after her. Rashford’s two older brothers, Dwaine Maynard and Dane Rashford, represent him as his agents.

“From a young age, we’ve learned that we have to be together to get through things,” he said. “If I didn’t have my brothers doing what they do for me, and my mum doing what she does for me, it wouldn’t feel normal. It wouldn’t feel right.”

“I suspect there’s a lot of agencies and groups assuming there are some really clever people around him,” said Lindsay Boswell, the CEO of FareShare. In reality, Boswell said, it’s just Rashford, his family and Kelly Hogarth, a Roc Nation strategist described as his “right-hand woman.” “The simplicity with which he’s challenged the prime minister — that’s the whole resonance of it.”

The brilliance of Rashford’s strategy rests as well in its stated apolitical nature. While effectively calling for a strengthening of the social safety net, a core demand of the U.K. left, he has refused to be pulled into a traditional Tory/Labor debate.

“His rhetoric has been nonconfrontational, but his policy is quite confrontational,” Vallely said. “I suspect he’s been well-advised, although he could just be one of these people who’s got a native sense of political intelligence. He might just have this intuition.”

After the U-turn in the summer, Rashford was recognized as an MBE, a member of the Most Excellent Order of the British Empire. In his statement accepting the honor, Rashford made a point of keeping the pressure on. He called on the prime minister, “who recommended me for this honour, to support our children … with an extension of the voucher scheme.”

And yet when the October “half-term” school break came around, the Conservatives again decided not to extend the vouchers. In Parliament, Conservative MPs argued needy families were already receiving enough government aid.

In response, Rashford demonstrated the potential of community support. Throughout the country, all sorts of businesses — restaurants, coffee shops, Manchester United — began providing meals to students in the vacuum of the government. Using his Twitter feed, Rashford mapped the volunteer providers. As Politico’s Jack Blanchard put it, “Marcus Rashford appears to have set up an alternative government.”

“I didn’t ask people to do anything,” Rashford said. “They done it off their own backs. A lot of businesses, they’re struggling. For them to help these families — it was a massive moment.”

When discussing the Twitter campaign, Rashford again differentiates his efforts from modern philanthropy. Donations are “an amazing thing of course,” he said, “but it’s so inconsistent. We need stability.” He doesn’t want galas, foundations, seasonal help. He wants structural change.

During the November Zoom call, Rashford said he wanted to speak to the prime minister again. “The conversation needs to be had,” he said. “It’s important that happens as soon as possible.”

A few days later, it did. After a Manchester United match on a Saturday afternoon against Everton — a tidy 3-1 win — Johnson called Rashford and informed him of the creation of a 170-million-pound fund to provide food and essential items to vulnerable families over the winter. The government had U-turned again.

“If I were to ignore them things that I’ve learned,” Rashford said, “I wouldn’t be being true to myself. I just know, in my heart, what’s right and what’s wrong.”