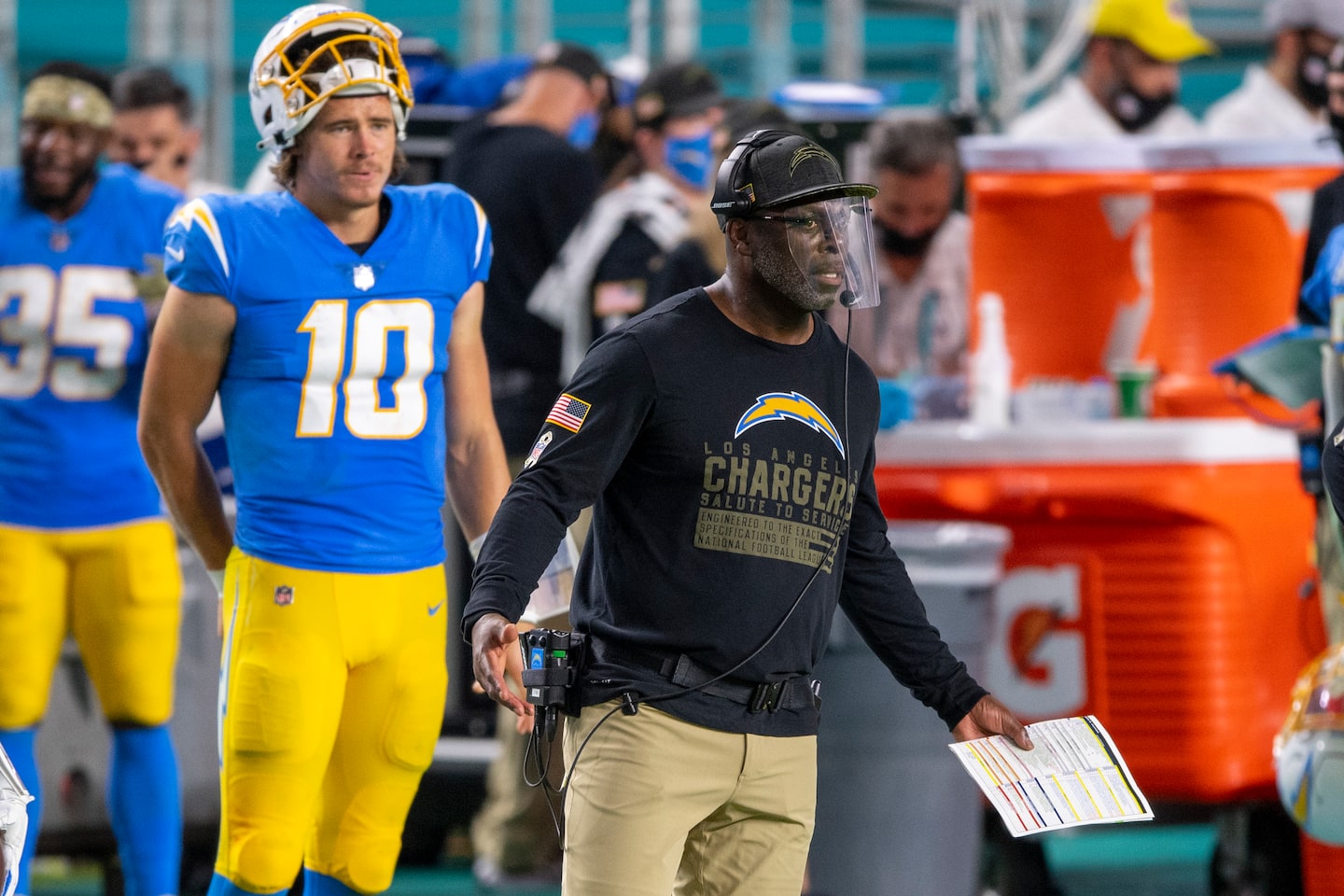 Coming into the season, there was a thought around the NFL that there could be several coaching changes — in part because of the fact that, after most seasons with relatively mild coaching turnover, there is more the following year. After last offseason produced just five new coaches, there could be as many as eight following the conclusion of the 2020 campaign. There could be even more turnover in the GM ranks.

In addition to Detroit, the Houston Texans and Atlanta Falcons have already fired their coaches. The seats are hot in Jacksonville, Denver, Chicago and for the head coaches of the New York Jets and Los Angeles Chargers. That’s eight possible openings — and each year, there is usually a surprise.

We’ll stay away from guessing potential surprise firings and instead rank the quality of the eight actual or possible openings from the perspective of potential coaching candidates.

Los Angeles Chargers: This team’s inability to hold on to big leads and close out tight games has Anthony Lynn in a tough spot. The Chargers are so much better than their 3-8 record. They have the league’s 12th-ranked defense, with impact players such as Joey Bosa, Melvin Ingram III, Casey Hayward Jr. and Chris Harris Jr. Young star Derwin James will be back next year. Most of their top players are under contract.

What makes this job arguably the best that could become available is that the Chargers have a really good young quarterback. Rookie Justin Herbert is the real deal. He puts up 300-yard passing games just about every week. He’s completing 66.9 percent of his passes and has 23 touchdowns vs. seven interceptions. He’s the leading candidate to be the rookie of the year.

The easiest way to design a winning team is to have a top quarterback on his rookie contract and build around him. Herbert has three more years on his rookie deal. The Chargers have more than $26 million of salary cap room next year. There’s a lot to like here.

Denver Broncos: Vic Fangio might have a hard time keeping his job if the Broncos lose 10 games. They are 4-7 and have a tough closing schedule that includes Kansas City, Buffalo and Las Vegas.

Fangio has done his job on defense. The Broncos have a top-10 unit even without star pass rusher Von Miller, who should be back next year. The offense is another attractive part of this job. Drew Lock is still trying to prove he’s a franchise quarterback, but the offensive line is solid and Denver has a talented, young receiving corps. The Broncos also have a lot of salary cap flexibility.

Atlanta Falcons: The first team to make a move, the Falcons have been studying possibilities since firing coach Dan Quinn and GM Thomas Dimitroff. After an 0-5 start, the Falcons have put together a 4-2 stretch, giving interim coach Raheem Morris a chance to keep the job.

What is attractive about the Atlanta job is the foundation of quarterback Matt Ryan and wide receiver Julio Jones. The defense ranks 27th and needs a lot of work, but the Falcons have some young talent on that side of the ball and an owner in Arthur Blank who is willing to do what is necessary to win.

The only shaky part of this job is the salary cap. The Falcons are $20 million over the cap, and there isn’t a lot of wiggle room among the players under long-term contracts.

Chicago Bears: Coach Matt Nagy and GM Ryan Pace might be able to survive, but a five-game losing streak that has dropped the Bears to 5-6 has made things tense.

There is a lot to like about the Bears’ talented defense, which isn’t at risk of losing starters to free agency. But of course there is the concern at quarterback. The trade up to draft Mitchell Trubisky clearly hasn’t worked. The trade for Nick Foles didn’t do the trick, either. So a new regime’s top task would be figuring out the quarterback situation and fixing one of the league’s worst offenses.

Houston Texans: Deshaun Watson is a quarterback any coach and general manager would love to have. He’s arguably one of the six best QBs in the game. Unfortunately, the mistakes made by Bill O’Brien in constructing Houston’s roster could take a couple of years to fix.

The Texans are $20 million over the salary cap because O’Brien spent $44 million per year on four wide receivers while also having a $22 million left tackle, an $11 million center and a $13 million running back. Even worse, he traded away a lot of draft choices. The Texans don’t have a first- or second-round pick next year.

With Watson making $39 million per year, there isn’t much room to add free agents. The defense needs to be rebuilt. Franchise cornerstone J.J. Watt could be a cap casualty. Whoever gets this job has to be prepared to lose more than he wins for the first couple of years.

Detroit Lions: Ownership really needs to get this right after having fired Jim Caldwell after two 9-7 seasons in favor of Patricia, who won 13 games over his two-plus seasons.

Over the past few years, the Lions have lost more talented players than they’ve acquired, and many around the league are wondering whether a new regime would try to move on from quarterback Matthew Stafford. Wide receivers Kenny Golladay and Marvin Jones Jr. are free agents. The defense is among the worst in football. There is a lot of work to be done here.

Jacksonville Jaguars: There aren’t many positive boxes to check with the Jaguars. They have had nine losing seasons over the past 10 years. What has happened to them since playing in the AFC championship game after the 2017 season has been terrible, including a total deterioration of what had been the league’s best defense.

Basically, the Jaguars are going to have to build from scratch. They’ll probably draft a quarterback rather than stay with Gardner Minshew II. The good news is that the Jaguars have more than $60 million of salary cap room. They also have 11 draft choices, including two in the first round and two in the second.

New York Jets: With apologies to the Jaguars, this is what building from scratch looks like. The Jets have one player on their 53-man roster who has been to the Pro Bowl: 37-year old running back Frank Gore. They are weak at cornerback and wide receiver. Their attempted fixes on the offensive line mostly haven’t worked out, with the notable exception of first-round left tackle Mekhi Becton. They’ll have to figure out what to do with 2018 No. 3 overall pick Sam Darnold, who has not proved himself to be the team’s franchise quarterback. It’s unlikely they could get a big trade haul for him.

There is some good news: They are in prime position to land Clemson star quarterback Trevor Lawrence in the draft. They have nine draft choices, including two first-rounders, plus $67 million in salary cap room. So the resources to rebuild are there — it just might take a while.

The Tampa Bay Buccaneers have a lot to sort out during their bye week. Most notably, Tom Brady is not getting things done downfield. He came into Sunday’s loss to Kansas City 0 for 17 on passes attempted 20 or more yards downfield. He has thrown seven interceptions in the past four games. Brady likes short, quick passes. Coach Bruce Arians likes longer, vertical throws. They need to get on the same page.

Baker Mayfield made some bad throws Sunday, but give Coach Kevin Stefanski credit for making the Cleveland Browns’ offense work. He stresses running the football, and Cleveland leads the league in rushing at 161.4 yards per game. It makes life easier for Mayfield, who has had bouts of inaccuracy, and the Browns are 8-3.

Defenses are figuring out that the best way to slow Kyler Murray is to blitz. The Seattle Seahawks did it. So did the New England Patriots. Murray is still good enough to complete plenty of passes, but his yards per attempt dropped to 6.4 against the Seahawks and 5 against the Patriots. The Arizona Cardinals fell to 6-5 with Sunday’s loss at New England.

Don’t read too much into the Indianapolis Colts’ blowout loss to the Tennessee Titans. Indianapolis was without several key players, including running back Jonathan Taylor, center Ryan Kelly, left tackle Anthony Castonzo and defensive lineman DeForest Buckner. Without Buckner in the middle, the Colts had no chance to stop running back Derrick Henry.