More virus-zapping robots are coming, and they’re here to stay 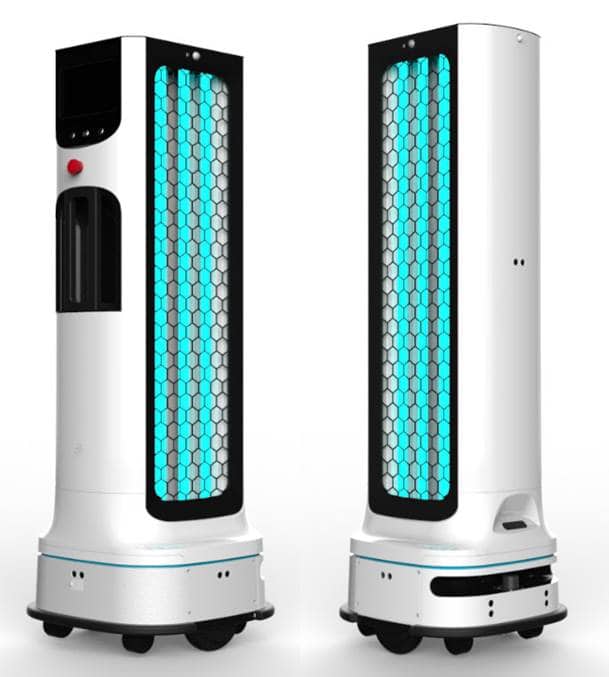 LG’s CLOi robot looks like a plug-in space heater on wheels and is set to be digitally unveiled Monday at CES, which was among the world’s biggest tech conferences but went virtual this year.

The device will ship to LG’s business customers in April — almost a year after several start-ups and organizations began hyping their automated germ-blasting machines in the face of a deadly respiratory virus. Still, LG thinks it is right on time as industries remain crippled by the outbreak and Americans face months of vaccine distribution ahead.

“I don’t think that the concern over items like this is going to go away anytime soon,” said Mike Kosla, the vice president for hospitality at LG’s business division in the United States. “This product is going to have a strong, strong life ahead of it.”

While the coronavirus is primarily spread through the air, UV-C robots disinfect rooms and equipment with ultraviolet light. CLOi will be LG’s first robot to be rolled out in the United States, and it wouldn’t have existed had the pandemic not presented a new business opportunity, LG says.

Hospitals have relied on mechanical UV light cleaners for years. But since March, a growing number of malls, airports and hotels have spurred demand for a new wave of user-friendly, anti-contamination droids that could safely zap high-traffic areas with or without people in the room. Companies grew desperate to attract foot traffic with elaborate displays of cleaning.

A New Mexico school district is already utilizing a UV robot by Xenex as an added safety measure. MIT began work on its UV-C robot for schools and grocery stores in April. Other such robots have been spotted at airports and sports arenas, and more are on the way.

Sales of cleaning robots are projected to swell from $341 million in 2019 to more than $2.3 billion by 2025, according to the market advisory firm Mordor Intelligence. Most of the growth comes in health-care settings, the report said. But other settings include schools and industrial facilities.

Before the pandemic, demand for UV light robots outside the hospital didn’t exist, according to companies in the field. However, analysts and tech firms think the droids are here to stay and will continue to crop up in new places as prices fall.

“I do believe there has likely been a slight paradigm shift in how people think about hygiene, as well as how corporations and governments approach sanitation-related issues,” said Tim Mulrooney, a commercial services equities analyst for William Blair.

Hills Engineering, which developed a robotic arm system that sprays disinfectant and emits UV light, also will show at CES. On Jan. 21, Canada’s Prescientx will release its talking UV-C robots, dubbed “Charlotte” and “Violette,” that were created to kill germs in large public spaces.

“We started developing a UV-robot in 2016, but there was no demand. It was ahead of its time,” said Barry Hunt, the chief executive of Prescientx. “Now there are all kinds of companies, probably 100 companies, around the world that are all jumping into that market because of covid.”

LG’s upcoming device has a built-in motion sensor that shuts it off when people are around, and it is meant for restaurants, corporate offices and retail stores. It can navigate around tables, chairs and other furniture by itself, generally disinfecting a room’s touchable surfaces in up to 30 minutes.

The company developed the project in eight months, building on various other overseas robotics projects. When it does launch, it’ll face a wave of competition.

LG says it will be more affordable than comparable products on the market, which can cost as much as $100,000 per unit.

The virus that causes covid-19 is primarily spread through respiratory droplets in the air, not via highly touched surfaces, according to the World Health Organization. The gadgets may make people feel safer and could be an added layer of protection in an era when cleanliness is top of mind.

A sustained market for cleaning robots hinges on the pandemic having a lasting impact on the American psyche, analysts say.

Part of what is expected to keep these boxy, light-emitting cleaners around is the notion that people won’t be as quick to forget the covid-19 health crisis compared with other outbreaks such as SARS and Ebola. Health experts say outbreaks of infectious diseases are becoming more common, so a fleet of robotic germ fighters will be around when the next one hits.

“If anything, this should be something that allows us to be better prepared,” said John Rhee, the general manager of UBTech Robotics, a firm offering a range of humanoid “anti-epidemic” gadgets. “One of the things that companies can do is develop products and become a part of a government’s core strategy on what to bring out of the warehouse when the next one occurs.”