What happens next in the impeachment of President Trump? 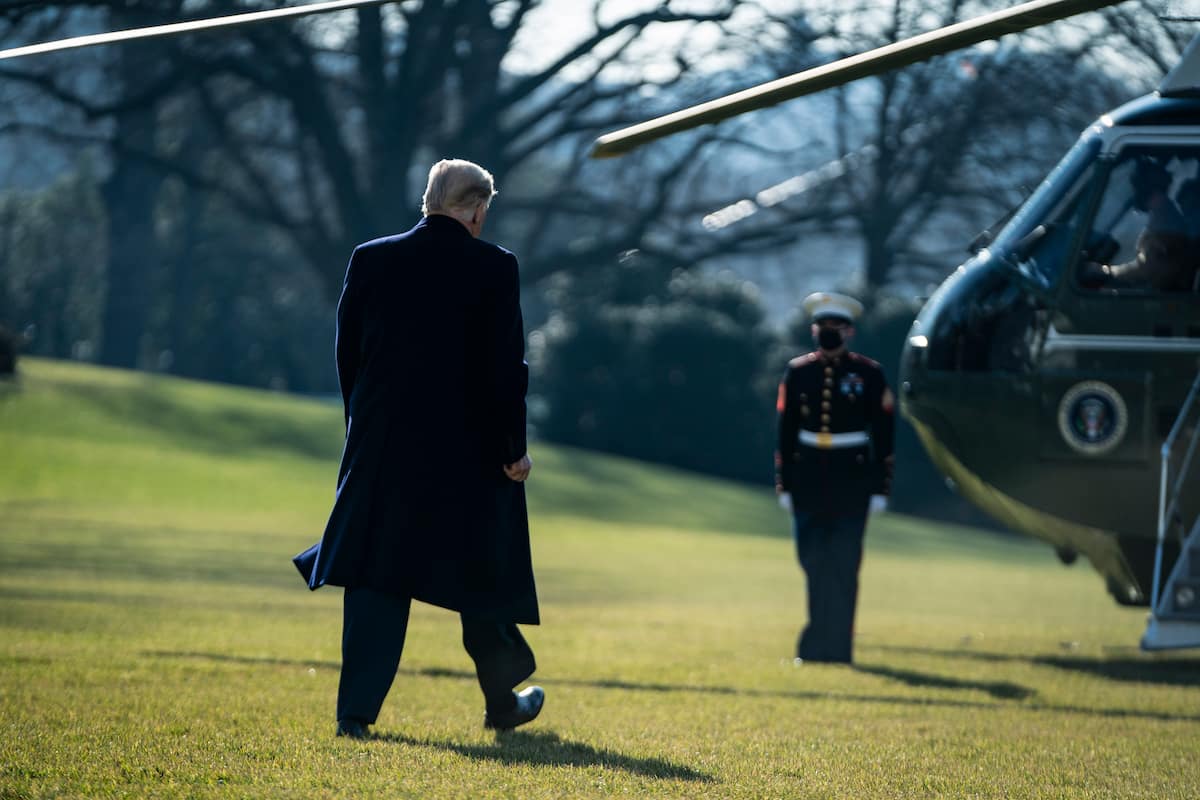 President Trump may soon be the first president in American history to be impeached twice. But being impeached is not the same as being convicted and kicked out of office or barred from ever holding it again.

Here’s how we got here, what’s happening and what could happen next.

Can Trump even be impeached a second time? And what are the consequences if he is?

Is there really time to impeach?

Yes. The impeachment process can be as long or as short, as detailed or not, as Congress wants it to be. The House is prepared to vote to impeach as soon as Wednesday. The Senate can hold a trial on whether to convict Trump even after his term ends, which is what seems likeliest to happen at this point.

Why is this happening?

Impeaching Trump in his final days in office was not on Congress’s to-do list. But then Jan. 6 happened.

Congress convened under tense circumstances, after Trump’s months-long quest to undermine the 2020 presidential election, contest his loss, and interfere in the counting of electoral votes and confirming that Joe Biden will be the next president.

Congress’s role in who is president is largely a formality. But scores of Republican lawmakers, including a majority of GOP House members, planned to use an 1880s law governing the process to object to seating electors from swing states Trump lost. That’s despite the fact that all states met the legal requirements for Congress and despite the fact that none of those challenges could get the votes to succeed.

As they got started, Trump was on the Ellipsis addressing supporters whom he had invited to the city to “be there, be wild,” and whom he urged that day to “fight like hell” to overturn his loss.

[What Trump said before his suppporters stormed the Capitol, annotated]

As debate over the first GOP challenge got underway, hundreds of those supporters stormed the Capitol, overwhelming Capitol Police and forcing lawmakers and staff to flee the chambers. Five people, including a Capitol Police officer, died as a result of the riot.

Democrats and some Republicans started calling for Trump’s removal from office immediately.

Why not the 25th Amendment, censure or other consequences?

There were a few options besides impeachment to get Trump out before he has to go on Jan. 20 at noon. He could resign. Or the vice president and half of his Cabinet could vote to remove him based on a section of the 25th Amendment that allows them to declare him unfit to serve.

House Democrats have called on Vice President Pence to remove the president this way before they impeach him, but while there were talks in the Cabinet of doing that, there was no action. Some Cabinet members resigned over Trump’s role in the riots, removing themselves from involvement in taking this unprecedented step.

Some constitutional law experts argue that Congress could use a lesser-known provision in the 14th Amendment to ban Trump from office, by voting that he “engaged in insurrection or rebellion” and thus can’t hold office again. They say that would only take a majority vote, though this could be open to court challenges.

House Democrats, more than 300 historians and constitutional law experts — and even a handful of Republicans — have argued that Trump poses a danger the longer he stays in office after encouraging the riots.

“We cannot let this go unanswered,” wrote Rep. David N. Cicilline (D-R.I.) in a New York Times op-ed, speaking for many in his party. “With each day, Mr. Trump grows more and more desperate. We should not allow him to menace the security of our country for a second longer.”

How would impeachment work in the House?

It will go quickly, at least the first half in the House of Representatives, which is the chamber where the Constitution says all impeachments must originate. There’s nothing in the rules that says the House has to hold months of hearings, or even any hearings at all, to impeach a president, said Josh Chafetz, a constitutional law expert at Georgetown Law. He noted that the House impeached Andrew Johnson before lawmakers had even finalized articles of impeachment.

Democrats introduced a single article of impeachment against Trump on Monday and made plans to vote on it within a week of the rampage at the Capitol if Trump’s Cabinet didn’t act to get the president out sooner.

It only takes a majority in the House to impeach a president, and Democrats hold that majority and appear to have the votes to impeach him a second time.

What happens in the Senate?

From there, the impeachment article goes to the Senate for a trial on whether to convict or acquit the president. The Senate is in the process of changing hands, from a narrow Republican majority to a narrow Democratic majority.

The timing of the House vote, less than a week before Biden is to be sworn in, means it’s likely that any Senate trial would happen under a Democratic-controlled Senate. Democrats would get to outline how the trial would work.

But it could require the Senate to stop all business for a few days, including confirming Biden’s Cabinet. (Some House Democratic leaders have suggested refraining from sending the impeachment article over to the Senate until Biden is more settled with his administration.) Biden asked the Senate if they could split the day in two, confirming his nominees and holding a trial. It’s unclear whether they can do that.

A president can likely be convicted after leaving office, but a Democratic majority does not mean senators have the votes to convict Trump. Democrats would need 17 Senate Republicans to join them, and it’s not clear they have that. So far, only three Republican senators have expressed openness to impeachment or getting Trump out of office — Lisa Murkowski of Alaska, Ben Sasse of Nebraska and Patrick J. Toomey of Pennsylvania.

“I want him out. I want him to resign. He has caused enough damage,” Murkowski said in the days after the invasion.

Sen. Mitt Romney (R-Utah), the lone Senate Republican who voted to convict Trump during his first impeachment, has expressed hesitation that impeachment is the right way to go, though he’s also said he thinks the president should be held accountable in some way.

Senate Majority Leader Mitch McConnell (R-Ky.) has said he’s furious with Trump for what happened and doesn’t plan to speak to him ever again, report The Washington Post’s Josh Dawsey and Ashley Parker. They report he told others that Trump probably committed impeachable offenses, which the New York Times first reported.

A conviction is necessary to hold a second, arguably more consequential vote to bar Trump from ever running for office again, Chafetz said. Though that only takes a majority vote.

What the new impeachment article says

The article the House will vote on is short, but makes three main points, mainly that Trump committed “high crimes and misdemeanors” because:

1. He falsely claimed he won: “Shortly before the Joint Session commenced, President Trump addressed a crowd of his political supporters nearby. There, he reiterated false claims that ‘we won this election, and we won it by a landslide.’ ”

2. He encouraged the riots: “He willfully made statements that encouraged — and foreseeably resulted in — imminent lawless action at the Capitol. Incited by President Trump, a mob unlawfully breached the Capitol, injured law enforcement personnel, menaced Members of Congress and the Vice President, interfered with the Joint Session’s solemn constitutional duty to certify the election results, and engaged in violent, deadly, destructive, and seditious acts.”

3. He’d been putting actions to his words to try to overturn his loss: The article mentions a recent call Trump held with Georgia’s secretary of state urging him to “find” just enough votes to overturn Biden’s win there.

What Republicans are saying about impeachment

House Republicans are lining up behind the argument that impeachment will be too divisive for the country, while trying not to acknowledge Trump’s role in the rhetoric that led to the storming of the Capitol. They have offered up alternatives such as censure, a much weaker option.

Democrats are trying to pressure Senate Republicans to hold a trial before Trump leaves office, but outgoing Senate Majority Leader Mitch McConnell (R-Ky.) seems unwilling to do so.

The majority of Senate Republicans are silent about what they think should happen to the president.

“I think letting the president stew in his own juices is probably the right way to go here,” Sen. Lindsey O. Graham (R-S.C.), a Trump ally who has also broken off his support for the president after the riots, told The Washington Post on Monday after meeting with the president. “Impeachment is going to reignite the problem, and we’ve got nine days to go here. It will do more harm than good, and I’m hoping that people on our side will see it that way.”

President Trump, who used his now-defunct Twitter account to defend himself throughout his first impeachment trial, on Tuesday morning called the new impeachment effort “a continuation of the greatest witch hunt in the history of politics.”

What happened in the last impeachment

After months of debate within the Democratic Party about whether to impeach Trump over his efforts to block a government Russia investigation, in the fall of 2019, Democrats moved forward with impeaching Trump for pressuring the president of Ukraine to investigate Biden. They went slowly, starting with an impeachment inquiry investigation where they called in about a dozen witnesses, before having some dramatically testify, often in defiance of Trump’s orders not to.

By December 2019, Trump was impeached by the Democratic House in a nearly party-line vote for two articles: abuse of power and obstructing Congress’s inquiry. In January, the Republican-controlled Senate held a relatively quick trial without calling new witnesses and acquitted Trump. Only one Republican senator, Mitt Romney of Utah, voted to convict Trump on one of the articles.

What questions do you have about impeachment?

Submit them here, and we’ll update this post with answers.