D.C. restaurants are hoping for a ‘Biden bump’ after the president’s Georgetown deli visit 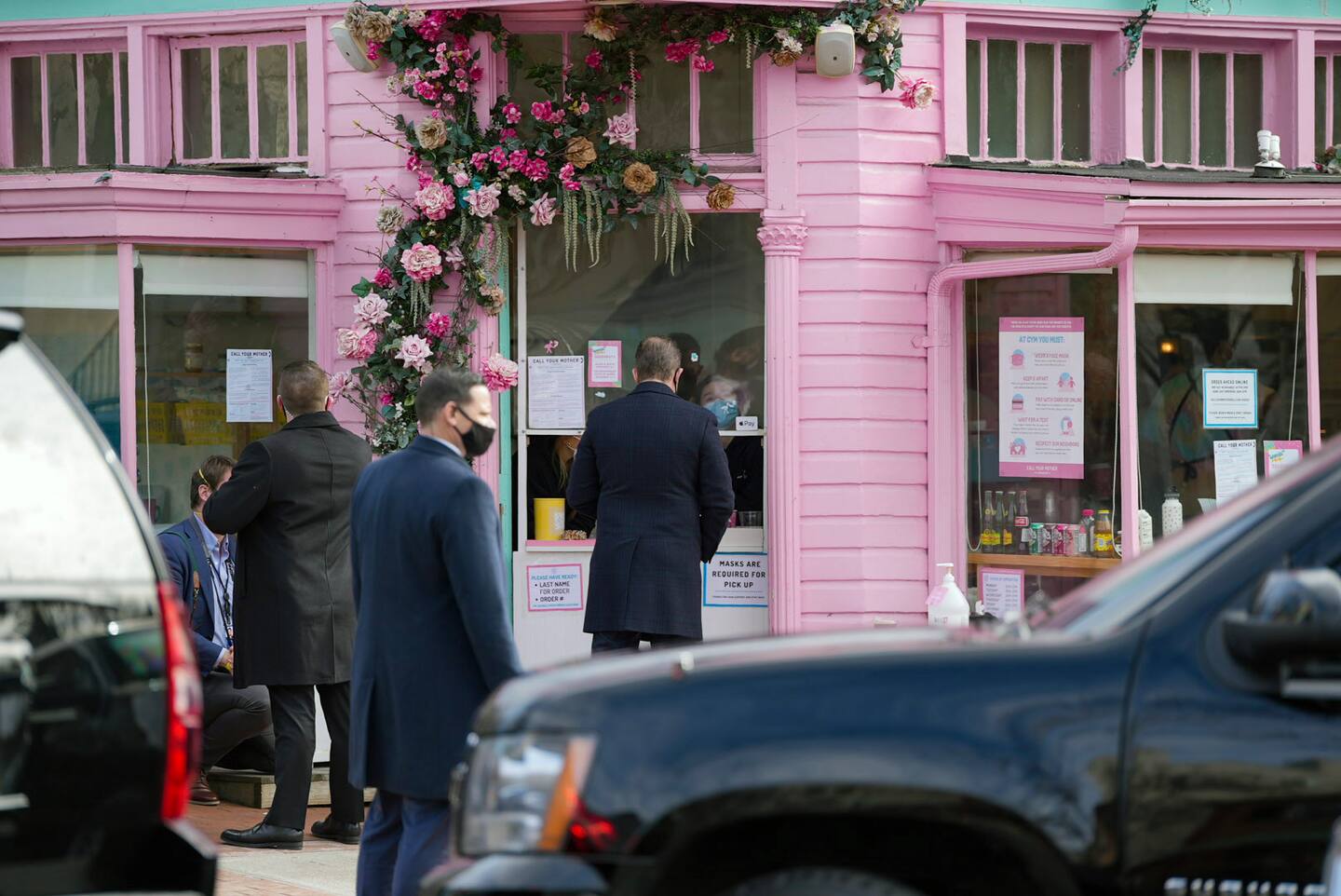 President Biden’s Sunday afternoon order from Call Your Mother, a self-described “Jew-ish” deli, was more than a stop for takeout bagels. It was a signal to restaurateurs across Washington that, after four years of President Donald Trump keeping his distance from the majority-Democratic city, the new chief executive will engage with the food and restaurant community, to the potential benefit of an industry in desperate need of a morale boost, not to mention revenue.

Andrew Dana, co-founder and owner of the small Call Your Mother chain, left 30 minutes before the presidential motorcade pulled up at the Georgetown location, which is just around the corner from Holy Trinity Catholic Church, where Biden had attended Mass. Dana joked that the presidential visit was a “total sneak attack,” not one secretly arranged by Jeff Zients, a former partner in Call Your Mother, who joined the Biden administration to coordinate the coronavirus response.

“I called Jeff, and Jeff said, ‘Oh, my God, that’s so funny. I haven’t even told him that I used to be a part owner of that business,’ ” Dana said. “I think it was totally random.” Zients, by the way, had to divest his interest in Call Your Mother before joining the administration, Dana said.

“I just think they were at church and leaving and — who knows? — they just saw it or somebody Googled it. But, yeah, they didn’t tell us anything,” Dana added. The staff didn’t suspect the order was for anyone special: It was placed by someone with the Secret Service, apparently under the agent’s name. “It certainly wasn’t ‘President Biden’ on the ticket,” Dana joked.

The order was modest for such a large motorcade of SUVs. Just four bagels: one plain with butter and three sesame-seed rounds, each with different toppings. One had cream cheese, another cream cheese and tomato and the third with cream cheese and jalapeños. “The bagels went into the car that [Biden] was in and waving from,” Dana said. The Secret Service left a generous tip, too. More than 50 percent, Dana said.

The impact of that small order has been immediate and significant, not just in social media buzz, but also in next-day sales. Sales at the Georgetown store were 100 percent above those of a typical Monday, Dana said. The impact was even felt at the chain’s two other brick-and-mortar locations, in Park View and Capitol Hill: Both saw Monday sales jump 33 percent, Dana said.

If a visit by a Trump official could generate serious blowback for a restaurant and its owners, a Biden stopover could have just the opposite effect in this left-leaning city: It could carry the same benefits that a visit by President Barack Obama had during his two terms, whether he was dining at the luxe seafood restaurant Fiola Mare or the two-fisted Ray’s Hell Burger with Russian President Dmitry Medvedev.

“Any time there was an appearance [by Obama or the first family], there was this excitement,” said Kathy Hollinger, president and chief executive of the Restaurant Association Metropolitan Washington.

“There was a boost in reservations,” Hollinger said. “There was an interest to go visit as well, knowing that if the president ate here or stopped by that we want to check out what they’re eating and … what they’re finding so interesting in terms of cuisine choice.”

Times are different now than they were during the Obama administration, of course. Restaurants are hobbled by the pandemic, operating at only a percentage of their usual capacity, if at all. People are nervous about dining inside restaurants. Biden didn’t even emerge from the SUV to enjoy his bagels from Call Your Mother. It could be months before he actually sits down in a restaurant in Washington, or anywhere.

The Call Your Mother stop was “a much-needed boost,” Hollinger said. “I think that, psychologically, it gives the kind of lift that not only the small-business operators need, but also the residents who are very invested into this community and who are such supportive diners. They like to see that the president is also connected in that way.”

Chef Spike Mendelsohn is the face of the Sunnyside Restaurant Group, the family-owned business with multiple concepts on Capitol Hill. The first family, especially Michelle Obama and daughters Sasha and Malia, were frequent diners at Good Stuff Eatery and We, The Pizza, though the president did take his economic staff out for burgers after the debt-ceiling crisis of 2011. It was hard to measure the impact of those visits in dollars and cents, Mendelsohn said.

But “it’s huge marketing. It’s huge PR. It drives traffic, and we love it,” he continued. “I can’t tell you that when the Obamas came this day, our sales jumped 15 percent. … But over time, the good fortune it casts on the business is priceless.”

Plus, Mendelsohn said, it has a cumulative effect on the entire hospitality scene. It says the president and first family want to be part of the city, not set apart from it.

“That was just such a good feeling for our industry that our first family was interested in our scene,” Mendelsohn said. “From the looks of it, Biden is going to have the same playbook. I think D.C. is his second home, obviously, because he’s had a massive life in politics. … So I think innately he feels D.C. is a home, you know, where I think Trump felt like an outsider.”

Dana at Call Your Mother will definitely be prepared should the president make a return visit after Mass.

“We’re here for him every Sunday,” he said. “We’ll set a couple of sesames aside for him.”

6 recipes that use halloumi cheese in all its squeaky, salty glory

Learn to make cajeta, a Mexican confection with multilayered sweetness and history

Climate news is relentlessly, objectively grim. Should we ever allow ourselves to feel optimism?