Disney took a hit during the pandemic, but you wouldn’t know it from its stock price 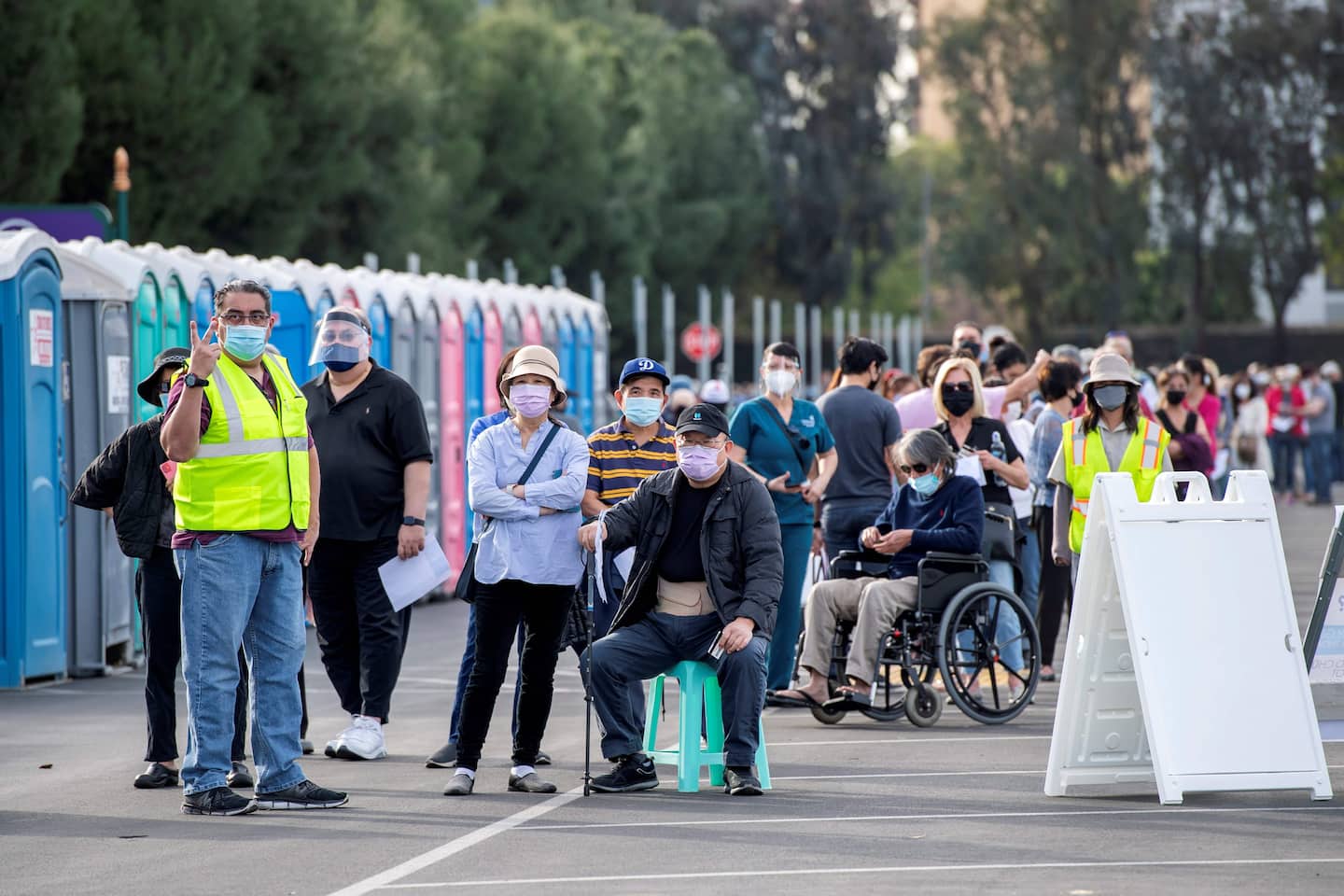 In the same period, Disney’s share price jumped 58 percent, hitting an all-time high of $191 last week. It closed Thursday at $183, more than twice its price of $86 from the first full week of pandemic shutdowns last March.

It has been a roller coaster year for Disney, figuratively if not literally. Many of its theme parks remain shuttered or at reduced capacity. But Wall Street has nonetheless taken the company on a significantly upward ride, buying shares in recent months at record rates. The company’s stock price has closed every day for the past 12 weeks above $150. In 40 years, that had happened only once previously.

The surge has elicited a range of analyst theories — from the growth of streaming service Disney Plus during the pandemic to an optimistic outlook about the windfall the company will reap after the pandemic ends. And while many remain bullish on Disney, they also gently ask whether the rally is based on too rosy a prediction.

“Nothing like the irrational exuberance of the markets,” Jim Nail, a technology and consumer behavior analyst at research firm Forrester, said with a laugh when asked about the Disney buy-up.

Then he said, “I do think the first 3-6 months [of post-pandemic life] will see a lot of people booking trips to Disney parks — there is a lot of pent-up demand, and that’s going to be a huge boost for the company.”

Whether that surge will benefit Disney’s other businesses remains uncertain, however. “It’s harder to make the case there will be a huge uptick in theater attendance,” Nail said. “People haven’t been going to parks. They’ve been watching new movies [on streaming] this whole time.”

It was a year ago next week when longtime Disney chief executive Robert Iger surprisingly stepped down, replaced by the head of Disney’s theme parks, Bob Chapek. A few weeks later, the entertainment juggernaut had to halt park operations in much of the world because of the spreading coronavirus and shelve its theatrical release schedule because movie theaters around the world were closing.

Things looked bleak. After regularly taking in large sums every summer — the company recorded a post-tax profit of $800 million in summer 2019 — Disney lost $700 million in the summer of 2020. The theme-park division alone lost $3 billion from April through September.

And after Disney’s 2019 theatrical releases banked $11 billion worldwide — more than half of which is pocketed by the studio — month after month went by in 2020 with barely any theatrical revenue. The company’s new releases in 2020 — “Onward” and “Mulan” — garnered just $210 million worldwide.

Disney was further dinged by a lack of live sports on its ESPN networks and new production for its ABC network, offering further reason for pessimism.

But the market did not share those negative feelings. After an initial drop of 40 percent in those first few chaotic weeks of the virus late last winter, Disney’s stock began a steady climb back. By November it had made up that entire 40 percent loss and returned to pre-pandemic levels, largely based on growth for the $6 monthly service Disney Plus, which was adding subscribers at fast rates.

Then the stock price went on a real rocket ride. Even as revenue in the last few months of 2020 was sinking 22 percent from the previous year, the promising medical news around vaccines and, particularly, a mid-December investor day on which Disney noted its deep roster of content, Wall Street excitement exploded. The stock jumped 14 percent on the announcement alone.

“In a nutshell, Disney is a reopening winner,” said Lloyd Greif, the head of Los Angeles-based investor Greif & Co and a longtime Disney observer. “The disease added rocket fuel to the rollout of its streaming service, and the cure will add rocket fuel to its relaunched theme park, cruise line and theatrical businesses. … Roaring Twenties time for Disney — let the good times roll, or so the market thinks.”

He said that while it could seem Pollyannaish, there was also a sobriety to such an assessment. “The Street is increasingly focused farther and farther out — a welcome change in some respects to the nearsightedness of years past,” he said.

A Disney spokesman did not immediately have a comment for this story.

Disney Plus has certainly been a bright spot. Though it’s not expected to be profitable for several more years, the service has managed to gather subscribers more speedily than many expected, boosted in 2020 by the pandemic and a successful launch in Latin America, where it hadn’t been previously.

Those numbers have driven the stock rally in a way similar to that of Disney’s Silicon Valley rival Netflix, another company whose erratic financial metrics — it has yet to achieve the all-important benchmark of being cash-flow-positive — have been forgiven by Wall Street because of skyrocketing subscriber numbers. (Netflix’s price has quadrupled in the past four years and currently sits at $548 per share.)

Disney Plus as of January had 95 million global subscribers, about half of Netflix’s total, in just a little over a year of existence.

Whether that growth can continue in the months ahead is an open question for experts, dependent in part on whether new shows can attract people not yet moved to subscribe.

“Disney Plus has been good at getting buzz for its shows because they feel different,” said Josh Spiegel, a frequent commentator on Disney and an expert on its content, citing the Star Wars-based Emmy nominee “The Mandalorian” and current viral hit “WandaVision.” “But can they maintain that with [the March-debuting Marvel series] ‘The Falcon and the Winter Soldier,’ which looks a little like what we’ve seen before? Can they keep doing that with other new things they have coming? I think that’s the question.”

Spiegel also said that even if people return to theaters in droves, the company has some uncertain prospects with its flagship Marvel Cinematic Universe at the box office, particularly with the November release of “Eternals,” which marks a new creative direction.

Others also are hedging their enthusiasm.

Lightshed Partners’ Rich Greenfield, who has been skeptical about the company’s fortunes throughout the pandemic, recently upgraded the company’s stock from “sell” but only to “neutral,” saying in a note that significant optimism required looking beyond the pandemic.

Disney has begun to take strides toward that reality, even as challenges remain. The company’s Hong Kong park is set to reopen Friday but has closed several times before. Parks in Shanghai and Tokyo are open. Paris is expected to be closed until at least April. In Florida, Disney World has been operating at reduced capacity. And at the moment, the Disneyland Resort in Southern California is a vaccination site.

Meanwhile, some pandemic experts say that presuming a return to normal public life, critical to Disney, would be naive anytime in the near future.

Nicholas Christakis, a physician and Yale sociologist who recently published the book “Apollo’s Arrow: The Profound and Enduring Impact of Coronavirus on the Way We Live,” has been among those saying that the next 12 months will continue current states of social distancing amid the slow creep to herd immunity.

On Disney’s quarterly earnings call after the close of the market last Thursday, Chapek himself hedged about a return to normal before 2022.

“We have no doubt that when we reopen up parks that were closed or increase capacity, we will have some level of social distancing and mask-wearing for the remainder of this year. That is our expectation,” he said.

Even as he warned of a deliberate timetable, however, Wall Street was taking heart in the idea of parks filled with people and sent the stock up another percentage point overnight.