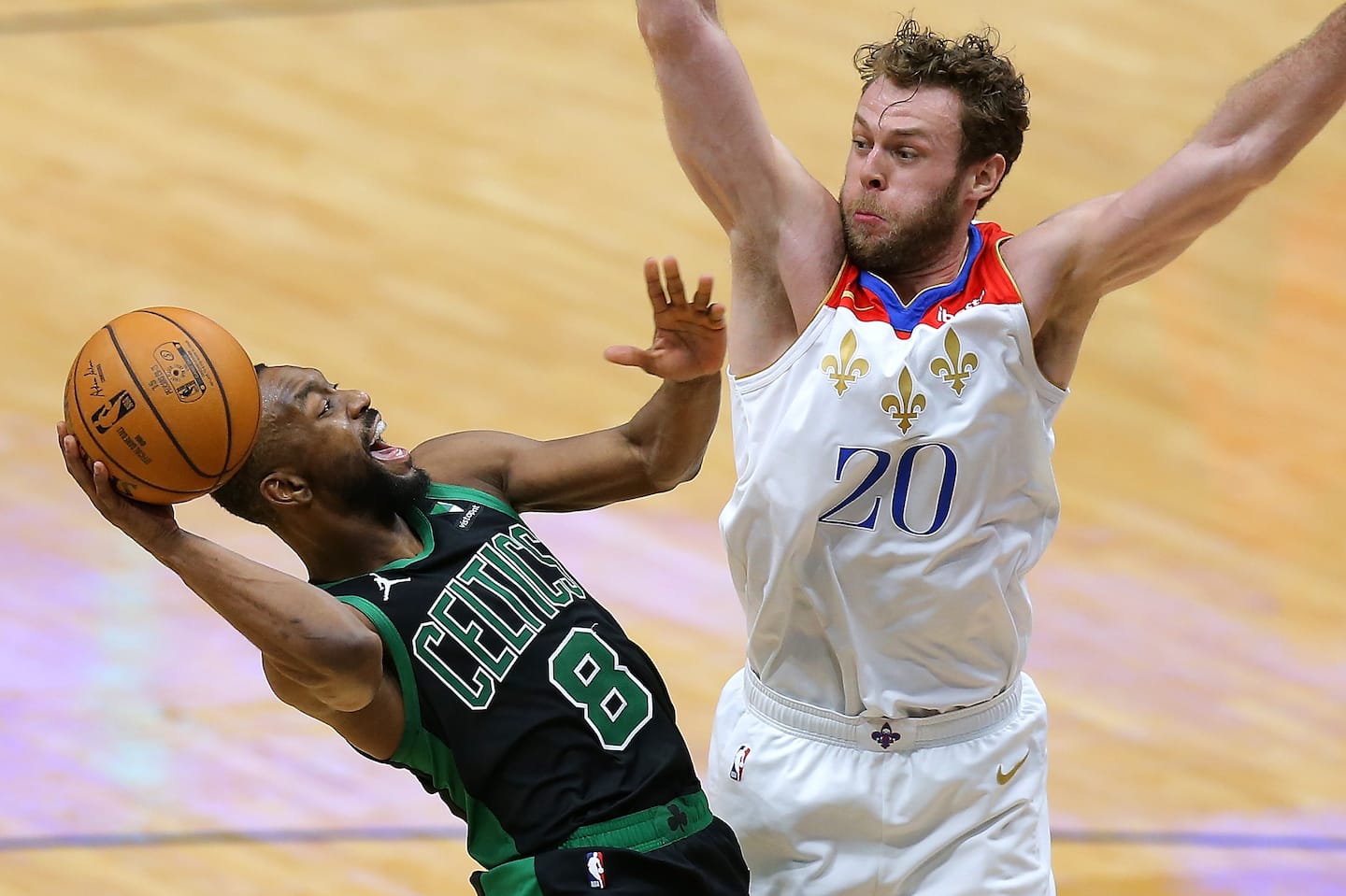 In the bubble, the pieces fit brilliantly and roles were clear: Jayson Tatum and Jaylen Brown were the wing leaders, Kemba Walker provided backcourt scoring pop, Marcus Smart brought the hustle and Daniel Theis did the dirty work inside. Boston breezed through the Philadelphia 76ers in the first round, gutted out tough wins over the Toronto Raptors in the conference semifinals and rallied from an early hole against the Miami Heat to turn in a respectable showing before losing in the conference finals. The tandem rises of Tatum and Brown promised a long championship window, and Boston departed Disney World with every reason to believe it would be the team to beat in the East.

But the Celtics’ horrific collapse against the New Orleans Pelicans on Sunday, in which they blew a 24-point third-quarter lead to lose in overtime, 120-115, was the latest illustration of how far this season has strayed from those rosy dreams. Boston sits at 15-15, pondering existential questions about its structure, camaraderie and longer-term direction.

“We’ve got to figure some things out,” Walker said after a Feb. 14 loss to the Washington Wizards. “It ain’t many positives. I’m going to be honest. We’re not good right now.” Later, Walker added that “it can’t get no worse than this” and “we’re not playing hard,” for emphasis.

Early warning signs emerged in the offseason: Gordon Hayward departed in free agency for a bigger contract and larger role with the Charlotte Hornets, while Walker received treatment for a bothersome knee that cost him the first 11 games of the year. Losing Hayward with nothing in return was a crushing blow in the never-ending arms race among contenders, and Walker’s poor play since returning from injury has only compounded those concerns.

After serving as a capable stand-in for Kyrie Irving and earning a 2020 all-star selection, Walker is shooting just 37.1 percent overall this season, he’s taking a career-low 10 percent of his shots from within three feet, and he’s averaging a career-low 3.1 free throw attempts. Given his lack of size and limited defensive impact, Walker isn’t an especially helpful player if he can’t get to the rim, earn trips to the line or keep defenses honest with his jumper.

Tatum and Brown, who both should be named all-star reserves this week, have ably picked up the slack. Both are averaging career-highs in scoring, and they continue to form one of the league’s most intriguing wing duos. The 22-year-old Tatum has done so despite a recent bout with covid-19, which he said left him getting “fatigued a lot quicker than normal” because it “messes with your breathing a little bit.”

The balanced lineups that surrounded Tatum and Brown last season are gone, replaced by groups that often feature two centers, simultaneously. The result is an offense that has dropped in efficiency from fifth last year to 16th this year, with Tatum and Brown often settling for tough, bailout shots due to spacing concerns and a lack of secondary shooters. Boston has also plummeted to 22nd in three-point attempts, ahead of only a few projected playoff teams.

“One of the challenges of our team is that when you get past our best perimeter players, the next three best guys as far as production goes, at first blush, are [centers],” Celtics Coach Brad Stevens acknowledged on Sunday, referring to Theis, Tristan Thompson and Robert Williams.

While Hayward spent much of his Boston tenure dealing with injuries, his ability to facilitate and score without dominating the ball are sorely missed. Smart, meanwhile, has proved to be irreplaceable since he was lost to a calf strain that could keep him out through the all-star break, according to ESPN.com. Boston is 5-7 in February without Smart, who gives Stevens a willing outside shooter, a versatile and energetic defender and a high-IQ leader. As the Pelicans roared back on Sunday, Smart could have helped with the Celtics’ abysmal transition defense, stagnant late-game offense and lagging spirit.

“It’s enough of a trend, it’s enough of a concern, we’ve got to stop it,” Stevens said of Boston’s recent fourth-quarter struggles. “Last year at this time, we were in really good shape in those moments. It has not been good.”

There are no easy solutions for Danny Ainge and the front office, which has pursued a deliberate approach since landing Tatum and Brown as lottery picks. Boston was unsuccessful in crafting mutually beneficial relationships with Irving and Hayward, and their exits are looming as major pivot points.

While the Golden State Warriors salvaged D’Angelo Russell in a sign-and-trade during Kevin Durant’s move to the Brooklyn Nets and flipped him into Andrew Wiggins and a first-round pick, the Celtics lost Irving and had to replace him by sending Terry Rozier to the Charlotte Hornets in a sign-and-trade for Walker. In an unexpected turn, Rozier is easily outplaying Walker this season. And after Hayward decided not to pick up his player option to chase a title in Boston, Ainge had to settle for a trade exception after he was unable to re-sign him or construct a sign-and-trade that returned a rotation player.

Walker’s contract, which will pay him $108 million through 2022-23, is suddenly an albatross. He’s not quite in Russell Westbrook or John Wall territory yet, but his short-term trade value is nonexistent until he returns to form. The second half of the Celtics’ rotation, which includes several recent draft picks who have yet to establish themselves, is also lacking in quality assets.

For years, Ainge’s roster construction efforts were aided by extra first-round picks from savvy trades with the Nets and Philadelphia 76ers. Yet that pipeline has run dry, and Boston still remains short on quality long-term pieces that can grow with Tatum and Brown. As Brooklyn went all-in to assemble Durant, Irving and James Harden, Ainge’s biggest play after losing Hayward was to sign Thompson, a limited role player. The pressure is officially on to find help with the trade exception before the March 25 deadline.

The Celtics, at present, look like they are stuck without sufficient superstar talent to keep up with the Nets and without the proper depth and continuity to overcome that top-end disadvantage. Does Boston have a path to acquire a true third star that doesn’t involve mortgaging its future by parting with first-round picks?

“We just got to mature and grow up,” Brown said after Sunday’s demoralizing loss.

Add it all up — the raised expectations from the bubble, the offseason step backward, the injuries, the lineup questions, the disjointed play and murky roster options — and Boston is left looking like the biggest disappointment of the NBA season.