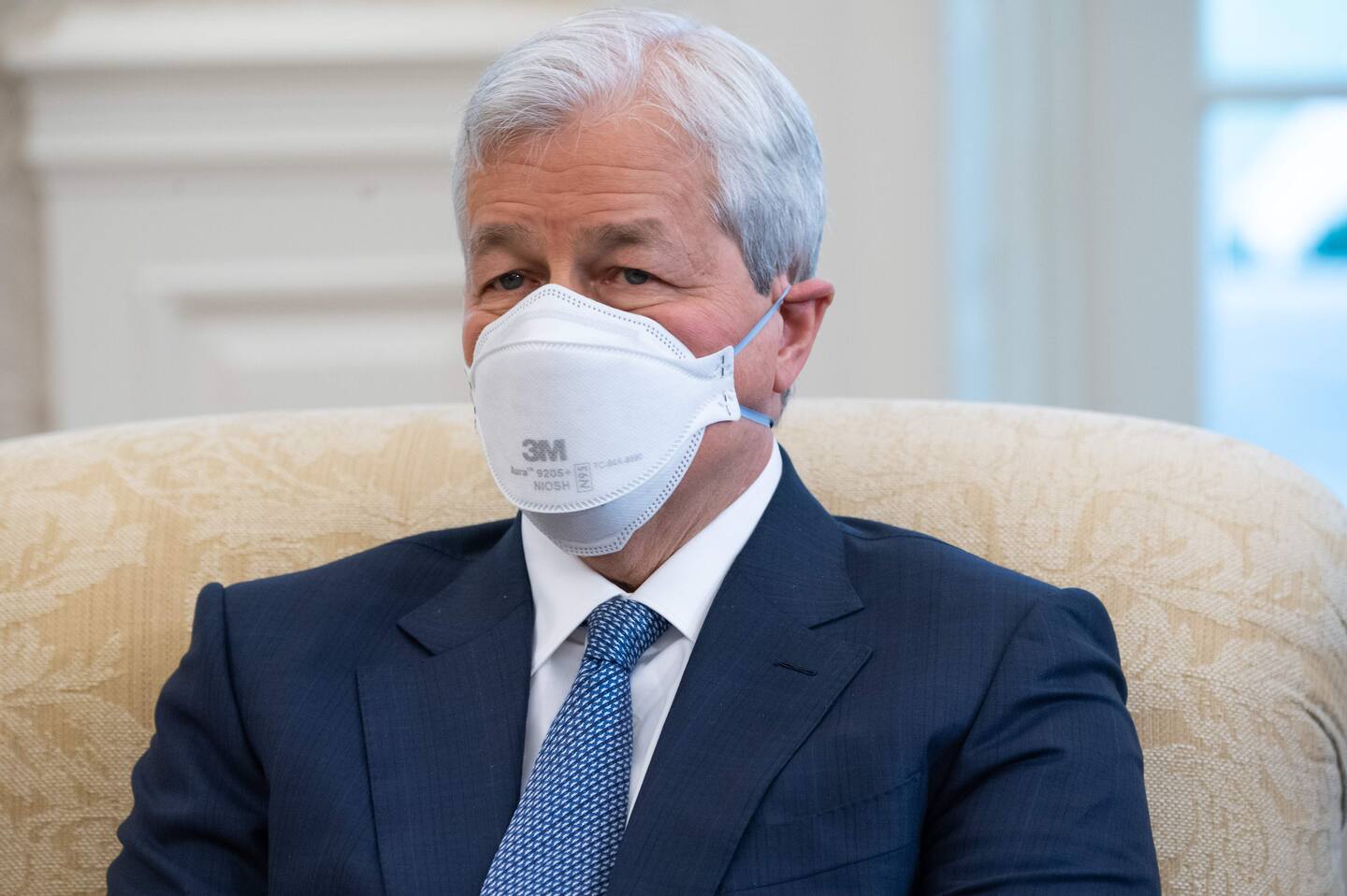 The investors say the mob attack highlights the urgency of their cause. “This is the most extreme example of why companies need to dig deeper, articulate their values, then put their money where their mouths are,” said Shelley Alpern, director of shareholder advocacy for Rhia Ventures. “It’s not outrageous to ask companies to stay true to those values, so they not only do less collateral damage to society but suffer less blowback when contradictions are turned up and exposed.”

JPMorgan, in its letter to the SEC, argued the company already sufficiently explains its political advocacy, including through an annual report listing its contributions to state and federal candidates and its trade group memberships. And JPMorgan spokesman Michael Fusco, in a statement to The Washington Post, said the company discussed the shareholder proposal with Alpern at length “and explained it’s too early to commit to any type of proposal given we are only partially through a robust and thoughtful evaluation of our giving strategies.”

The squeeze facing JPMorgan is hardly unique. Last month’s deadly insurrection continues to reverberate for major corporations that pump hundreds of millions of dollars into the political system. Dozens of companies from Wall Street and beyond have frozen their giving — either across the board or limited to the 147 Republican lawmakers who opposed certifying President Biden’s electoral victory — and pledged to rethink how they participate in the process.

But some left-leaning investors and clients aren’t satisfied. They are wary corporate interests are simply waiting for the dust to settle before resuming contributions to Republicans committed to deregulation and lower taxes, despite those lawmakers also championing positions on environmental and social matters the companies say they oppose. So they are leveraging their commercial relationships with the companies to try to force them to act.

JPMorgan’s resistance to the activist push typifies the corporate response so far. The bank’s request to the SEC for help keeping shareholders at bay made no mention of the violent insurrection that had rocked the country five days earlier — or the company’s decision to halt all of its giving to politicians in both parties for six months as it took what CEO Jamie Dimon described as “a little bit of a deep breath, figuring out what we should change and how we should change it.”

The bank’s political action committee contributed $136,500 over the last election cycle to Republicans who opposed certifying President Biden’s election, according to data from the Center for Responsive Politics.

The SEC will decide in the weeks ahead whether to allow the activist investors to put the matter to a vote at JPMorgan’s annual shareholder meeting later this year. Last week, the agency approved a similar resolution targeting Pfizer.

“This is a moment of truth for companies,” says Bruce Freed, president of the nonprofit Center for Political Accountability, which scores companies on how transparent they are about political giving. “Is there a going to be a change in their accountability policies?”

Freed, whose group also helps organize shareholder resolutions, said he expects more than 30 such votes on disclosure of corporate political giving in the spring proxy season, and another 10 or so by the end of the year. That’s an average number: He said his group helped file 40 shareholder resolutions aimed at political transparency last year, and they garnered 42 percent support from shareholders on average.

In the wake of the Capitol attack, companies are facing more acute pressure to act.

Public pension funds overseeing more than $1 trillion are turning up the heat on giant Wall Street asset managers both to better report on their own giving and support shareholder resolutions to force similar disclosures from companies in which they own significant stakes. In a letter to JPMorgan executives earlier this month, 28 decision-makers for such retirement funds asked what the bank is doing to reform its political giving and whether, as a top asset manager, it would throw its weight behind shareholders seeking more transparency from other companies.

“We believe that the events of January 6 add greater urgency to concerns and expectations regarding corporate political spending and lobbying transparency and practices,” the pension fund officials wrote. Fusco, the JPMorgan spokesman, declined to comment on the letter.

And at least one of the firms said it is taking heed. Last year, the pension fund officials noted, 48 shareholder proposals calling for greater disclosure of corporate political and lobbying activity gathered more than 20 percent support; Vanguard opposed all of them. This year, Vanguard spokeswoman Alyssa Thornton said, “recent events in the U.S. political landscape have raised new questions about the potential risks associated with corporate political activity,” and the fund will take those into account in evaluating shareholder resolutions.

The Democratic takeover of Washington is also boosting the activist investors’ cause.

The Trump-era SEC sided with major corporations in their bid to make it harder for shareholders to force votes on their priorities. Last September, the agency raised the minimum amount of stock an investor had to own to propose a resolution from $2,000 worth of stock held for a year to $25,000 for a year or $15,000 for two years. And it made it harder for shareholders to resubmit failed resolutions in subsequent years.

The Business Roundtable was among the most vocal advocates of the change. The CEO lobby, then chaired by JPMorgan’s Dimon, made waves in 2019 for declaring companies should balance the drive for profits with the needs of customers, employees and communities. But it worked to limit the ability of shareholders to weigh in on management decisions, writing a 54-page letter to the SEC last year arguing tighter restrictions on investors were necessary to allow executives to “drive long-term value.”

In a dissent, Commissioner Allison Herren Lee wrote the moves put “a thumb on the scale for management in the balance of power between companies and their owners.” She now serves as the agency’s acting chair and is set to continue as one of three Democratic commissioners forming a new majority if Gary Gensler, Biden’s pick to lead the SEC, wins Senate confirmation.

A Democratic-led SEC looks primed to deliver a long-sought victory for corporate political disclosure that would eclipse one-off wins via shareholder votes. Advocates started pressing the agency 10 years ago to make such disclosure a blanket requirement for public companies. A petition requesting the move gathered more than 1 million comments. Since 2015, however, Congress has included a provision in the agency’s funding measure barring it from working on a rule.

Democratic majorities controlling both chambers of Congress are widely expected to scrap the block. Sen. Chris Van Hollen (D-Md.), now in the majority on the Senate Banking Committee, said it is “long overdue for the SEC to take an active role in campaign finance,” and said he plans “to strongly push for action to help ensure Americas have a clearer picture of where public companies’ interests lie — and who is working on their behalf.”

Democrats at the SEC are set to follow suit. “One of a shareholder’s most important roles in our system is to make sure directors are acting in the company’s best interest, and hold them accountable when they don’t,” Commissioner Caroline Crenshaw, a Democrat, said in a statement. “I think it’s difficult to ask them to do that if they’re kept in the dark about how those directors are spending money.”

Business lobbying groups are signaling they will continue to fight adoption of a rule. If the agency persists, “it should take care to recognize and safeguard the First Amendment rights of public companies, including the right to engage in political speech, to petition the government and to freely associate through trade associations,” said Linda Kelly, general counsel of the National Association of Manufacturers.

Those closest to the debate expect it could be next year before the SEC even begins a rulemaking process on the matter. But Lucian Bebchuk, director of Harvard Law School’s corporate governance program and co-author of the SEC petition for the disclosure rule, said shareholder resolutions are no substitute for a federal disclosure standard.

The investor actions “have been able to obtain voluntary disclosures only at a small fraction of public companies, and those disclosures commonly have loopholes and are not done in the uniform and consistent way that would facilitate comparison,” he wrote in an email, adding those companies that “elect to avoid voluntary disclosure are likely to be disproportionately ones that have relatively more to hide.”