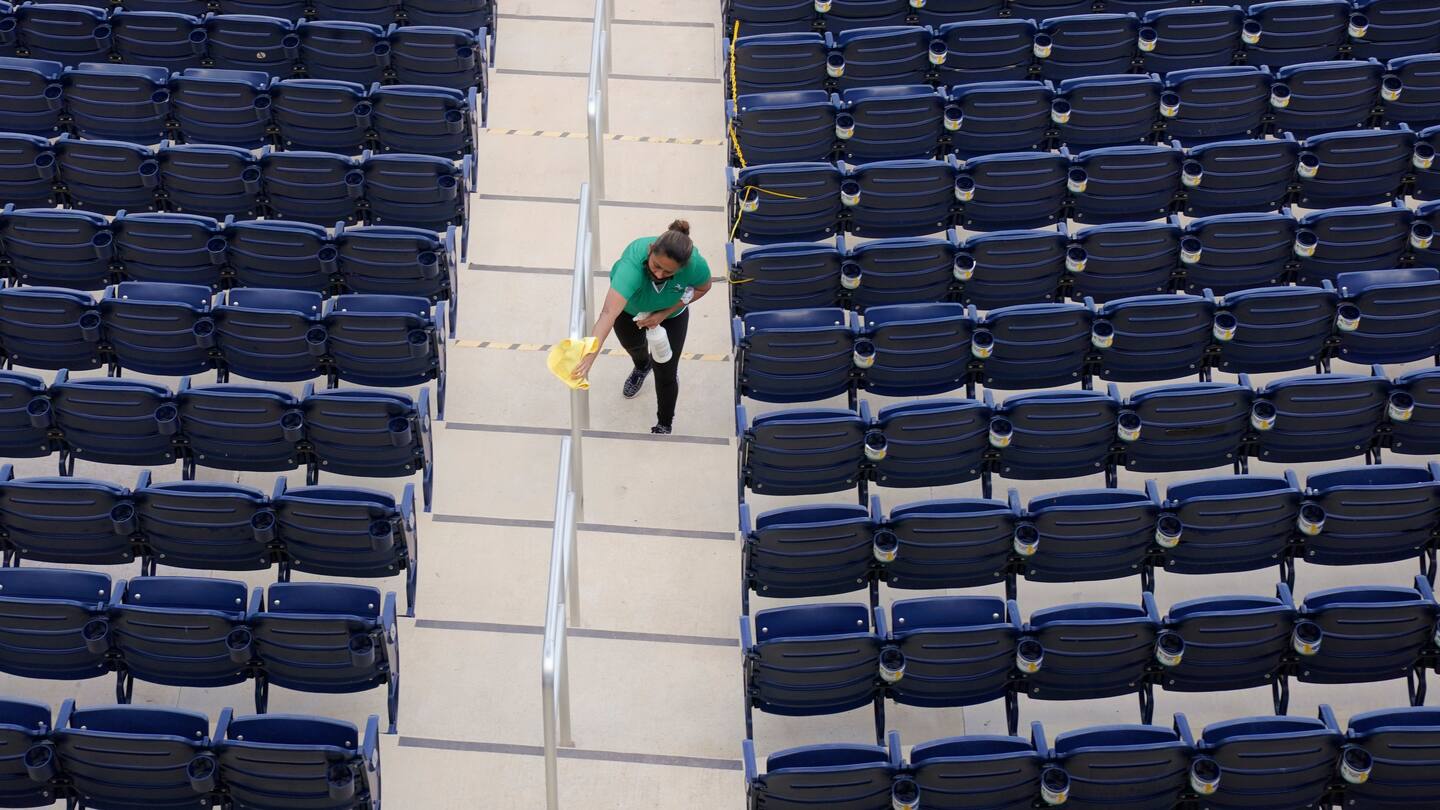 In Washington, D.C., though, the Nationals are left wondering what their stadium will look like on April 1. The club has submitted a proposal to the city and Mayor Muriel E. Bowser (D) with the goal of welcoming back fans amid the coronavirus pandemic, according to a person with knowledge of the process who was not authorized to speak publicly about it. The proposal, that person said, is in line with what other teams have had approved by local or state officials in recent weeks.

The Nationals’ ask is to have the maximum number of fans who could sit in small pods that would be spaced six feet apart in all directions. The city could choose to approve fans but do so at a lower capacity than requested. A Nationals spokeswoman declined to say the capacity the team has proposed in its discussions with the Mayor’s office. The Nationals’ official comment was that “we are working closely with the city and will continue to do so.”

The basic model, with fans wearing masks in pods, and with unused seats blocked off with tarps or zip ties, is already being tested at spring training sites in Florida and Arizona. On Sunday, the Nationals played in front of about 1,500 fans in Jupiter, Fla. On Monday, they hosted fans at up to 18 percent capacity at their park in West Palm Beach, where the facility doubles as a public coronavirus testing center. MLB had to approve each spring training stadium’s seating plan and is working with teams, such as the Nationals, that remain in limbo for the regular season.

When asked about the Nationals’ proposal, a spokeswoman for Bowser echoed the team’s line: “The Nationals have reached out to DC [Homeland Security & Emergency Management Agency) and DC Health to begin talks about the 2021 season. Those talks are just beginning but we hope they advance expeditiously.” An follow-up question about the details of the team’s proposal was not answered Monday. Since spring training began in February, a handful of prominent Nationals have not been shy about their preference.

Manager Dave Martinez on Feb. 18: “I hope the fans understand that we miss them. We want them there. And as soon as they deem they’ll be safe and we’ll all be safe, they’ll open up the doors and get them back in the stands. As we all know, you watch the NFL and they had fans. It’s gonna happen sooner or later.”

Starter Max Scherzer on Feb. 19: “The fans should be in the stands, one-hundred percent. You can do it. We’re in outdoor stadiums. Fans need to be allowed to come into the ballpark. We can engineer a way around it. I don’t see any reason why not. So, hopefully, cooler heads prevail, we look at this pragmatically and we get some National fans out there.”

And first baseman Ryan Zimmerman on Feb. 25: “I know every state, city, they have their own rules for different reasons, and that’s way above my pay grade. But if you can safely implement it, or if you can start it at 10 or 15 percent and see how that goes for a couple weeks or a month, and then gradually build up, I think it would be good for everybody.”

Two of those points are complicating factors for D.C.: The NFL’s fan rollout and city rules. There is no NFL team under D.C.’s jurisdiction. And because the Washington Capitals and Wizards do not yet have fans, there are not yet city rules for attendance at pro sporting events.

Since the Washington Football Team plays in Landover, Md., Bowser and the city had nothing to do with the decision to allow fans in the fall. November. Maryland Gov. Larry Hogan (R) made that call. But Ohio, for example, can pull from NFL experience with the Cleveland Browns and Cincinnati Bengals when it considers fans and stadium capacities for the Indians and Reds. It’s also helpful precedent for any city or state that wants to keep fans churning through the gates.

On Thursday, Ohio Gov. Mike DeWine (R) announced that the Indians and Reds can soon fill up to 30 percent of their ballparks. Pittsburgh and Philadelphia, two Pennsylvania cities that had NFL teams hosting fans this fall — when cases were higher and vaccines a still daydream — recently announced the Phillies and Pirates can have fans to start the year. That all leaves the Nationals in a dwindling group.

They worked with the city this past summer to relax a specific coronavirus regulation for the team. But the request had a limited effect on the general public. The Nationals wanted their players, coaches and staff to be able to go straight from home to work during D.C.’s mandatory 14-day quarantine for anyone who was potentially exposed to the virus. The city obliged while expressing skepticism in its letter of response.

Allowing fans back at Nationals Park is not a decision it can make in that manner.