The South’s monuments will rise again

An earlier version of this column incorrectly stated that the Confederate statue from Rockville, Md., was on public display; it was removed in June 2020 and placed in storage. This version has been updated.

Erin L. Thompson is a professor of art crime at the John Jay College of Criminal Justice, City University of New York, and the author of the forthcoming book “Smashing Statues: The Rise and Fall of American Monuments.”

On June 21, after 125 years of standing at attention, the bronze soldier on top of the North Carolina State Confederate Monument was finally laid to rest on the bed of a flatbed truck. Gov. Roy Cooper (D) had ordered the monument removed from the Capitol grounds after the death of George Floyd.

As the soldier came down in Raleigh, spectators cheered, took photos and sang “We Shall Overcome.” But I wondered where that truck was headed. After all, under North Carolina’s 2015 Historic Artifact Management and Patriotism Act, any removed monuments must be placed somewhere as prominent as their original location. Thus, the soldier so gently removed from his perch in 2020 will likely be boosted back up on it again one day soon.

That soldier has plenty of company. Not a single one of America’s hundreds of public Confederate monuments has ever come permanently, irreversibly down.

In 2015, the white supremacist massacre in Charleston, S.C., spurred government authorities to take down 11 Confederate monuments in cities across the South. But six quickly went back on view in public locations, including cemeteries, battlefield sites and a museum. One, from Rockville, Md., was still visible to the public until June, when it went back in storage. Its new owner, a private ferry company, displayed the statue on the banks of the Potomac River next to its embarkation point. The rest remain in storage, but almost all the cities have indicated they are merely deciding on the proper alternate location for their monuments. 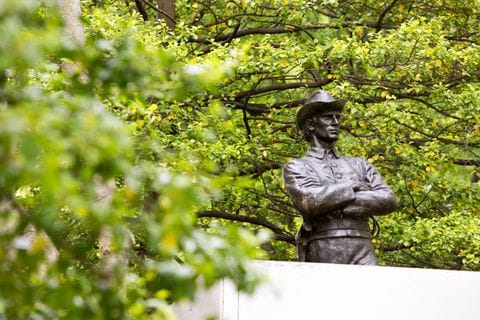 A bronze statue of a Confederate soldier in Rockville, Md., in May 2016. (Eric Kruszewski for The Washington Post)

The same pattern is true of the nearly 30 Confederate monuments dismantled in reaction to the events in Charlottesville in 2017, and the nearly 100 Confederate monuments either toppled by protesters or removed by authorities after Floyd’s death. Some were damaged, but none beyond repair. A statue of Christopher Columbus in Waterbury, Conn., decapitated in July 2020, had its head reattached and was back on its pedestal in front of City Hall by the end of the year.

Rather than destroying monuments, the 2020 protests may have protected them, rendering it impossible for communities to make democratic decisions about their public spaces. My research shows that after the protests began last summer, legislators in 18 states proposed bills increasing the criminal penalties for vandalizing a monument. Meanwhile, 13 state legislatures considered bills that would make even the official removal of monuments more difficult or outright impossible.

Many of these recently removed monuments remain in storage, but 19 of them have been given to pro-Confederate groups, who are free to put them back on display. Fourteen are either already back up in cemeteries or are scheduled to be moved there. Another 19 are headed to battlefields, other historical sites or museums. Some of these monuments are in states, such as North Carolina, whose law mandates that they go back up. In other jurisdictions, officials are likely wary of private plaintiffs filing lawsuits to protest failure to restore monuments. (Lawsuits have already been filed seeking reinstallation of statues honoring Columbus and a former mayor of Philadelphia that were taken down in 2020.)

Moving a controversial monument to a museum, where viewers can learn about its historical context, might seem like the best resolution. But even that isn’t so simple. Most museums do not have spare funds to conserve and display monuments. Thus, the organizations most eager to claim them have been those that celebrate the people the monuments commemorate: Tennessee’s National Confederate Museum will be the new home for a statue of Ku Klux Klan head and Confederate cavalry leader Nathan Bedford Forrest formerly located in a Memphis park.

Even if a museum wants to present a more balanced picture, recent research shows that museum visitors tend to ignore information that conflicts with what they already believe about history. If visitors believe that a Confederate general was a kind master to the people he enslaved, a few signs won’t convince them otherwise. Many of our public monuments were designed to promote white superiority; as long as these monuments are visible in any context, there will be those willing to listen to their original message.

Zyahna Bryant, who was a high school student when she started a petition to take down Charlottesville’s Confederate monuments in 2016, spoke at the removal of a statue of a Confederate soldier monument from the town’s courthouse in September. “We are making the courthouse look more equitable,” she said, “without reckoning with the institutional racism that takes place inside.”

America does have a long way to go before it will finish dealing with the racial disparities inside its courtrooms. It hasn’t even dealt with the monuments outside.

DeVitta Briscoe: I’ve lost three loved ones to gun violence. Only the one killed by police did not get justice.

Roya Hakakian: We immigrants owe a great debt to the African American struggle for equality