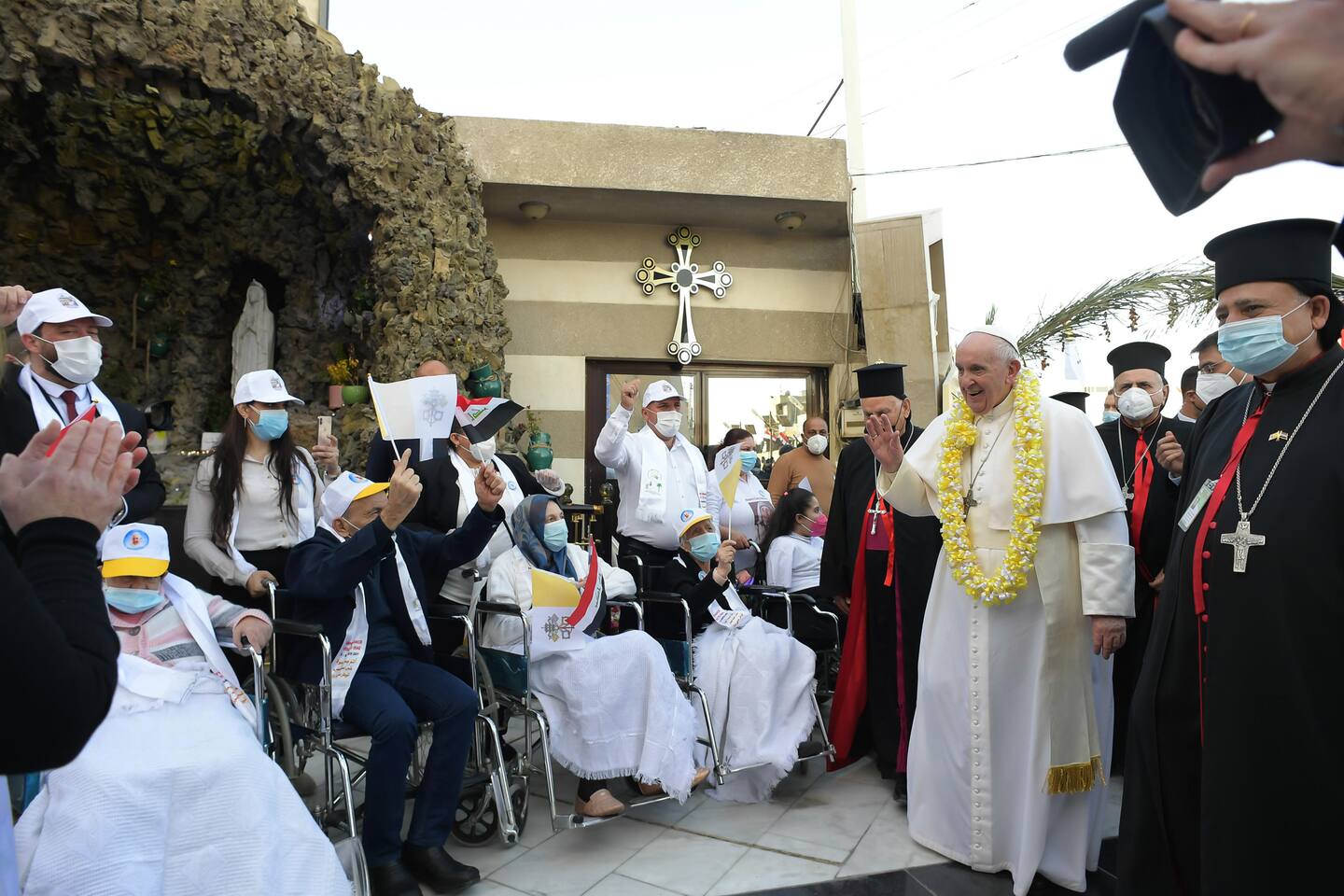 The trip, in the face of a litany of potential risks, is particularly rich in symbolism for Iraq’s embattled minority Christian communities, whose numbers dwindled amid the widespread insecurity that followed the U.S.-led invasion in 2003, and later, the threat of the Islamic State.

What Christian communities remain in Iraq?

Since the early days of the religion, an array of Christians have lived in what is today Iraq. Tradition holds that Abraham — the forefather of Christianity, Judaism, Islam and other related sects — was born there. Many Christian groups in Iraq, including Assyrians, Chaldeans, Armenians and Syriacs, maintained traditions, languages, and liturgies distinct from the Christianity of the West.

Iraq, like elsewhere in the Middle East, was once a rich tapestry of religions and ethnicities. But wars and political changes in the 19th and 20th century, such as the fall of the Ottoman Empire, European colonialization, the rise of Arab nationalism and the creation of Israel, altered the very frameworks that had once kept these communities together.

Like Iraq’s once prosperous Jewish and other minority religious groups, in recent decades vast numbers of Iraqi Catholic, Orthodox and other Christians have left for safety elsewhere, with many seeking asylum in the West. These days several hundred thousand Christians remain in Iraq, according to estimates, compared with around 1.5 million before the U.S. invasion in 2003.

What threats and persecution have Iraq Christians faced?

Over the years, Iraq’s Christians suffered the same repression as other Iraqis under former strongman Saddam Hussein, sectarian violence during the U.S. occupation and the threat of annihilation by the Islamic State, which seized territory in Iraq in 2014 for several years.

Iraq’s Christian churches have been the repeated targets of bombings, and community members have been killed, kidnapped, harassed and forced from their homes.

In an event rich with somber symbolism for Iraqi Christians, Pope Francis spoke Friday with bishops and other religious figures at Our Lady of Salvation cathedral, a Syrian Catholic church where an al-Qaeda-affiliated gunman killed 58 people in 2010. The attack was just one in a longlist of bloody events that have scarred relations between Iraqi Christians and Muslims.

An image of Pope Francis has been painted on the protective blast wall that now surrounds the church.

What are the goals of the Pope’s visit?

The pope’s visit is set to put the spotlight on the heavy toll that years of war, repression and instability have taken on the country’s now-diminished Christian communities.

Before taking off for Baghdad, Pope Francis said he was duty-bound to visit a place “martyred for so many years.”

The pope’s travel plans have been moderated by the pandemic. Nonetheless, thousands of Iraqis lined roads around the airport to catch a glimpse of the pontiff.

In his first speech of the trip, at Iraq’s presidential palace, Francis praised Iraq’s historic multiculturalism.

“The religious, cultural and ethnic diversity that has been a hallmark of Iraqi society for millennia is a precious resource on which to draw, not an obstacle to be eliminated,” he said. “Over the past several decades, Iraq has suffered the disastrous effects of wars, the scourge of terrorism and sectarian conflicts often grounded in a fundamentalism incapable of accepting the peaceful coexistence of different ethnic and religious groups.”

The pope called for the protection of Iraq’s Christian communities as a requisite for ensuring a stable future for the country.

“Their [Christian Iraqis] participation in public life, as citizens with full rights, freedoms and responsibilities, will testify that a healthy pluralism of religious beliefs, ethnicities and cultures can contribute to the nation’s prosperity and harmony,” he said.

Also on the trip, Pope Francis plans to visit the Iraqi Christian town of Qaraqosh, to said at a mass at the Chaldean Church in Baghdad, and attend an interreligious meeting at the Plain of Ur, which according to religious teachings was the hometown of Abraham, a common historical patriarch for Christians, Jews and Muslims.