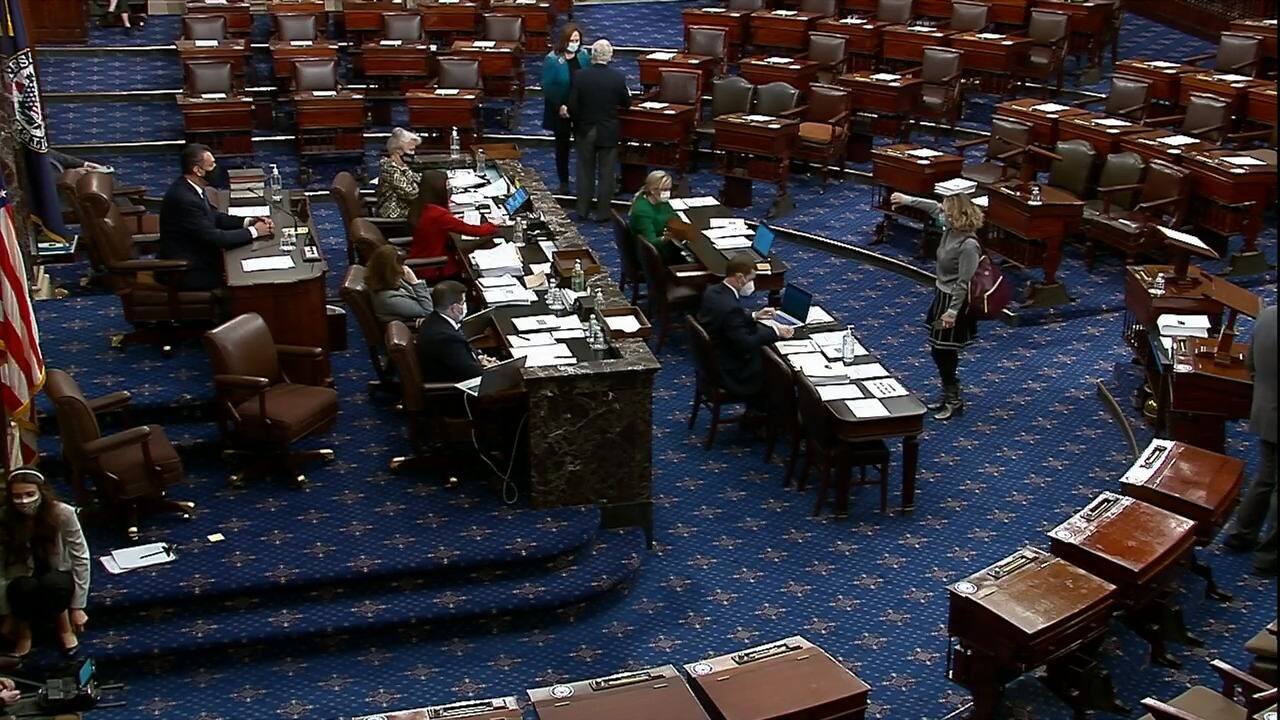 Rep. Rashida Tlaib (D-Mich.) also went after Sinema, saying, “No one should ever be this happy to vote against uplifting people out of poverty.”

Sinema’s office responded to the backlash Friday night by suggesting to HuffPost that it was sexist. “Commentary about a female senator’s body language, clothing, or physical demeanor does not belong in a serious media outlet,” said spokeswoman Hannah Hurley.

One is that this vote wasn’t strictly about whether to raise the minimum wage; it was whether the $15 hike belonged in the coronavirus relief package. Sinema has in the past supported a higher minimum wage, and her critics, including Tlaib’s fellow House Democrat Mark Pocan of Wisconsin, highlighted that Friday night. “Wow,” Pocan wrote, while sharing a 2014 Sinema tweet that said raising the minimum wage was a “no-brainer.”

The Senate parliamentarian ruled that the minimum wage hike couldn’t be part of the package, under the rules for passing a bill by reconciliation, which allows for passage by a majority threshold, rather than a 60-vote one. Some Democrats who opposed its inclusion suggested it was ill-timed or too rapidly phased in, given that businesses are hurting during the slow recovery from the pandemic, but others argued it didn’t belong in the relief package regardless of whether they supported it.

The latter is a position Sinema has staked out before — making her vote Friday no surprise — and one she reiterated in a statement earlier Friday.

“Senators in both parties have shown support for raising the federal minimum wage, and the Senate should hold an open debate and amendment process on raising the minimum wage, separate from the COVID-focused reconciliation bill,” she said.

A second point is that senators often vote with their thumbs. They did so during the drawn-out minimum wage vote Friday — freshman Sen. Jon Ossoff’s (D-Ga.) thumbs-up also made the rounds — and Sinema has in the past been more animated than her colleagues in doing so.

Here’s another example, from last year:

But whether it was advisable to use her thumb in this particular circumstance is separate question — given how existential many liberals have cast this issue as being. The minimum wage is often an issue that gets vastly oversimplified in our political debate, but it’s one that inspires huge passions on the left, and the criticism from House liberals drives that home.

Sinema’s vote in some ways recalls her another Arizona senator, the late John McCain (R), whose demonstrable thumbs-down on a Republican effort in 2017 to repeal of the Affordable Care Act effectively killed the bill. That too was cast as being gratuitous by fellow Republicans, and President Donald Trump never let him forget about it.

Sinema’s vote wasn’t nearly so pivotal in this case, but she is emerging as a likely pivotal vote on key Democratic initiatives — and one who could find herself pitted against the liberal Democratic base on other issues. She’s already taken heat for bucking an effort to get rid of the filibuster.

Democrats on many or most votes will need both Sinema and Manchin, given the 50-50 Senate and early indications that Republicans will be pretty or completely united on things like the coronavirus relief package.

But while Manchin has the excuse of coming from one of the reddest states in the country, Sinema comes from a state that voted (albeit narrowly) for President Biden. And relative to the lean of her state, her voting record was more pro-Trump than any of her Democratic colleagues, per FiveThirtyEights data. If you’re a Democrat, it’s easier to argue she should be with your side than Manchin. And as many have pointed out, her fellow Arizona senator, Mark Kelly (D), is the one up for reelection in 2022, and he voted in favor of including the minimum wage in the bill.

It’s all a recipe for Sinema being pitted against the liberal wing of the party on some key issues — and that wing being exasperated by it. It’s a mixture that didn’t really need anything to make it more combustible.