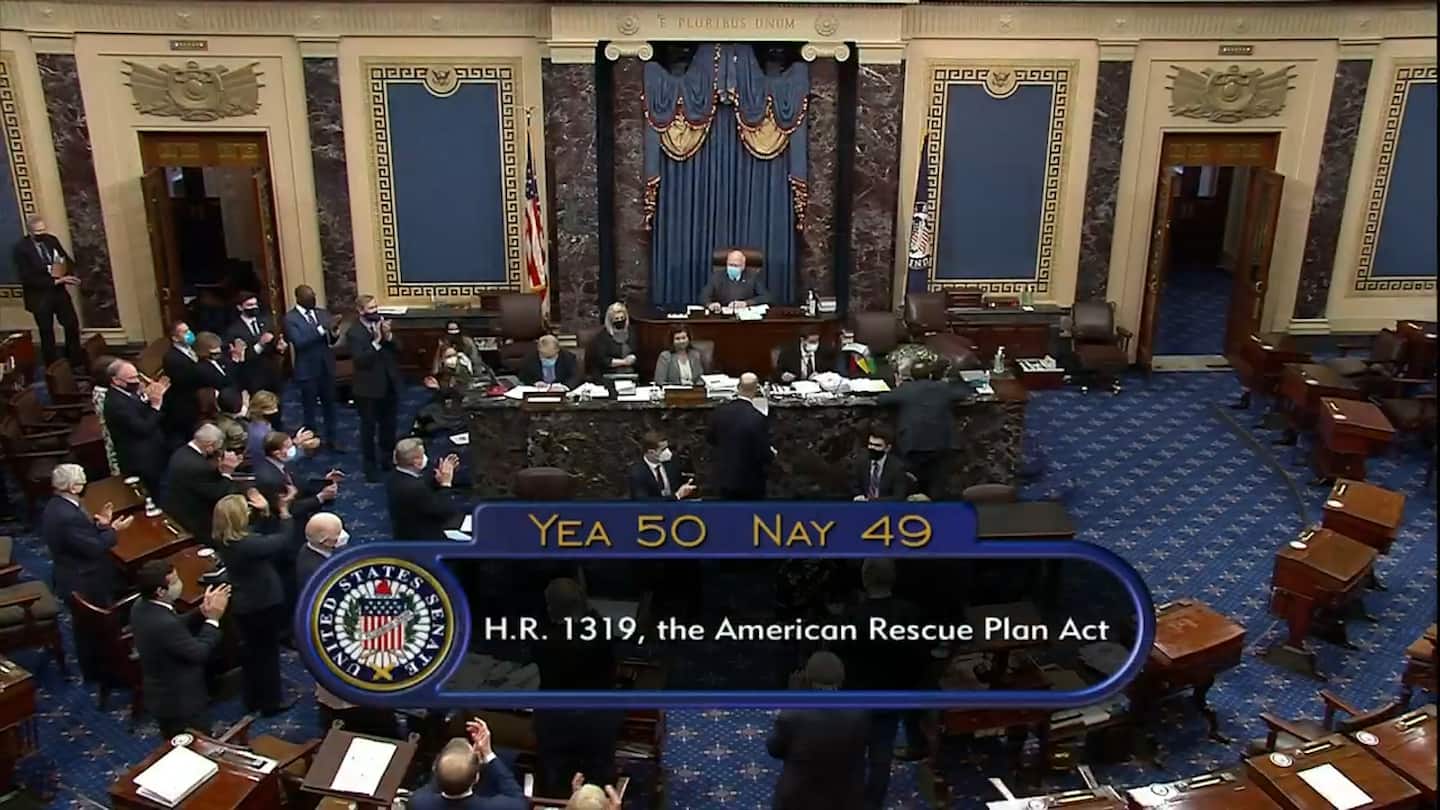 The Senate’s passage of the measure marked an early win for Biden and his congressional Democratic allies, who had promised in the wake of the 2020 presidential election to authorize a robust package of new coronavirus aid –- including another round of one-time checks for families -– as one of their first acts.

But a prolonged standoff between centrists and progressives within the Democratic caucus quickly served to illustrate the precarious politics of the party’s meager tie-breaking majority in the Senate, where even one holdout can upend Democrats’ economic agenda in the early days of Biden’s presidency.

The relief measure includes a new round of up-to $1,400 stimulus checks for millions of Americans, $350 billion for cash-strapped cities and states, $130 billion for schools, and other sizable sums for a wide array of programs including food assistance, rental relief and coronavirus vaccine distribution. The bill also authorizes an additional $300-per-week in unemployment payments until early September, trimming the amount that House Democrats initially had approved earlier in the month.

The scope and duration of the jobless aid at one point appeared to imperil Democrats’ legislation: The Senate fell into a nine-hour standoff that stretched into late Friday night as one of the party’s most influential moderates, Sen. Joe Manchin (D-W.Va.), demanded significant changes to scale back the benefits.

Once resolved, though, Democrats largely banded together to jettison a series of Republican amendments that would have dramatically slashed spending or struck funds set aside for transit systems and local governments. The relief plan generally remained intact as it cleared the chamber on a 50-49 vote more than a day after legislative proceedings began.

“This bill will deliver more help to more people than anything the federal government has done in decades,” said Senate Majority Leader Chuck Schumer (N.Y.) in a speech just before the chamber adopted the bill.

The process still exposed fissures within the Democratic caucus, pitting progressive-minded lawmakers, willing to spend big and act aggressively to achieve sweeping economic reforms, against some moderates, who have preached political unity and fiscal restraint. And it illustrated the difficulty that Biden in particular may face in wooing Republicans to support his legislative agenda, given that every GOP lawmaker opposed the bill.

The lingering tensions threaten to loom large over the Senate as it prepares to turn soon to Biden’s plans to upgrade the country’s infrastructure and rethink the U.S. tax code.

“Voters gave Senate Democrats the slimmest possible majority. Voters picked a president who promised unity and bipartisanship,” he continued, noting Democrats instead had opted to “ram through” their stimulus bill.

Along with stimulus checks, unemployment aid, and cash to cities and states, the stimulus that passed the Senate on Saturday includes a bevy of aid to lessen businesses’ tax bills, assist Americans in paying for childcare and support transit and other infrastructure reforms. Schools and hospitals also receive a major financial boost as the U.S. government labors to respond to the coronavirus while simultaneously preparing to return to regular life more than a year after the pandemic first arrived.

But some of Democrats’ other priorities did not survive the fractious Senate debate. The most critical included a plan to boost the federal minimum wage to $15-per-hour, which would have marked the first such increase in decades.

The provision became a casualty of Democratic leaders’ tussle with moderate members of their own caucus, who did not support an effort to override the Senate’s parliamentarian after the rule-keeper determined it could not remain part of the bill. The chamber advanced the stimulus under arcane rules known as “reconciliation,” meaning it only required a simple majority to pass. A later effort by Sen. Bernie Sanders (I-Vt.) to revive the minimum wage hike failed.

Moderate Democrats also secured changes to narrow the scope of stimulus checks, rethink how some state and local aid might be distributed and reduce the amount of weekly unemployment benefits even while extending their duration past August. Democrats brokered the deal on jobless benefits with Manchin out of concern that he would side with Republicans led by Sen. Rob Portman (Ohio) on an effort to scale back the aid even further to July.

The unemployment provisions at one point late Friday sparked a tense back-and-forth on the Senate floor between Portman and Senate Finance Committee Chairman Ron Wyden (D-Ore.), with Portman citing the reopening of many sectors in states across the country to argue the benefits were unnecessary.

Wyden responded that the tax forgiveness only included modest relief for jobless Americans, adding of the GOP’s opposition: “The party that claims to want to help workers on their taxes won’t lift a finger.”

Portman’s amendment eventually passed with Manchin’s support, but Democrats’ compromise with the senator essentially overwrote it. Earlier, the White House backed the Democrats’ deal on jobless benefits. Biden spoke personally with Manchin on Friday in an effort to resolve the issue at a moment when the senator’s vote looked uncertain, according to a person with knowledge of the conversation who spoke on the condition of anonymity to confirm it.

The alterations together still marked a break with the House, where some Democrats appeared irate late Friday out of a belief that the 2020 election had given them a mandate to deliver sweeping, aggressive economic reforms.

“What are we doing here? I’m frankly disgusted with some of my colleagues and question whether I can support this bill,” tweeted Rep. Bonnie Watson Coleman (N.J.), later adding: “What I’m seeing of the negotiations right now doesn’t cut it.”

The Senate took up various other amendments into early Saturday morning, though none altered the fate of the bill. Numerous proposals pushed by Senate Republicans — including an attempt by Sen. Susan Collins (R-Maine) to offer a $650 billion bill in place of Biden’s; an effort by Sen. Marco Rubio (R-Fla.) to tie school funding to reopening; and a plan by Sen. Tim Scott (R-S.C.) demanding transparency in state nursing home investigations — were defeated narrowly by the Democratic majority. Democrats did later band with the GOP on limited changes including redirecting $800 million in education funds to help homeless kids.

In other instances, Republicans sought to scuttle the stimulus through controversial votes around immigration and transgender equality. An amendment from Sen. Tommy Tuberville (R-Al.) aimed to block some federal funds to schools that allow students to participate in athletics programs based on their gender identity as opposed to their biological sex. Democrats joined with Sen. Lisa Murkowski (R-Alaska) to block the attempt.

The House is still expected to pass the Senate’s bill quickly, teeing it up for Biden to sign in a matter of days.