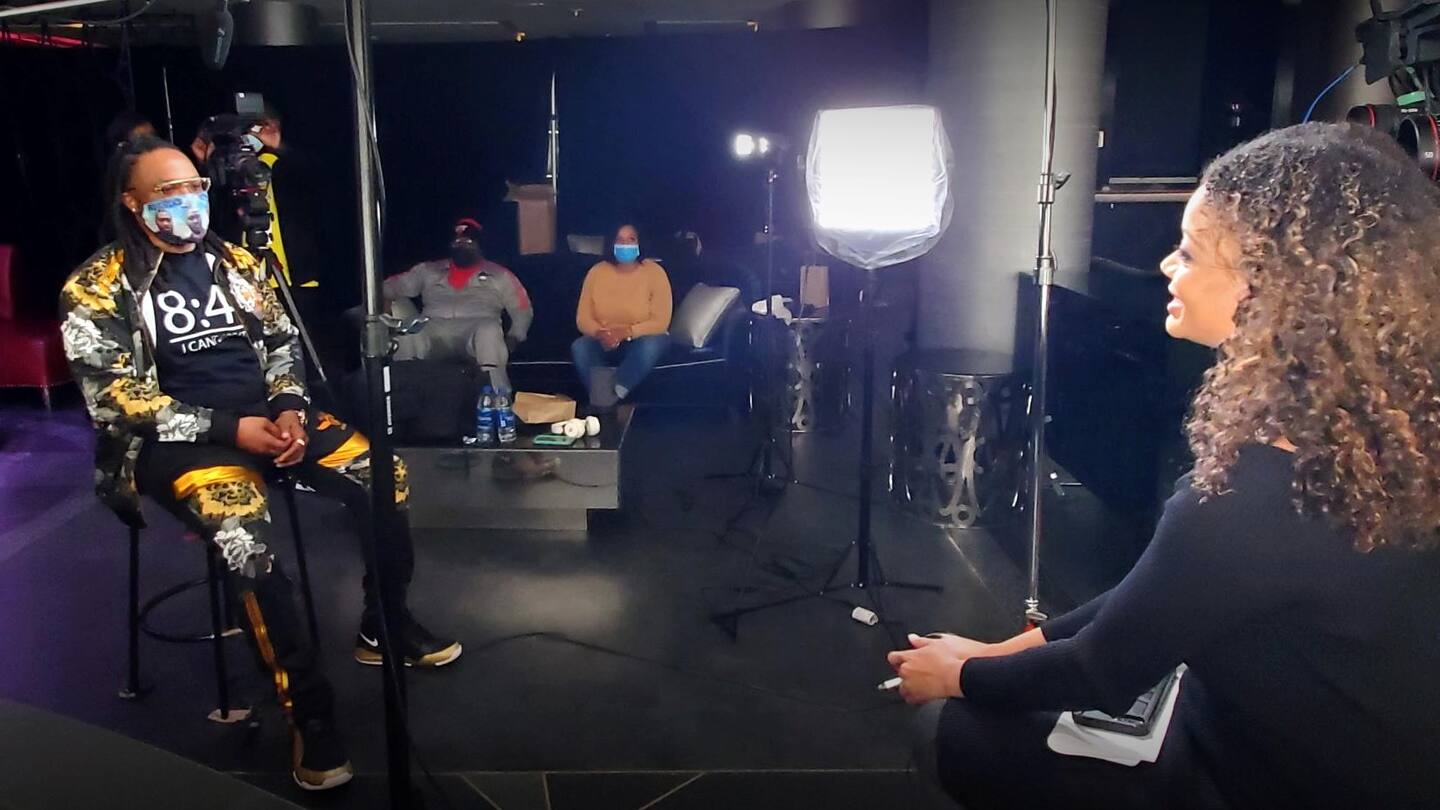 “That’s interesting,” said Scott Tufts, the network’s senior vice president and general manager. He weighed the comment, then said, “But many viewers will know George Floyd; fewer of them will know Derek Chauvin.”

How to approach the trial of Chauvin, who faces murder charges in Floyd’s death, is a question crackling through the air of Court TV these days. Known in the 1990s for its splashy courtroom square-offs, the network is planning extensive coverage of a new and weighty set of proceedings. Executives at Court TV’s Atlanta headquarters have enlisted their entire 75-person editorial staff to work on the case, dispatching about 20 people to Minneapolis in a bid to once again become a go-to legal-news destination. Jury selection in the trial is scheduled to begin Monday.

Court TV is looking to a template that dominated in the 1990s — a brutal crime, a compelling victim, controversial police work and a heavy vibration of race — but updating it for today. The network hopes to make it a kind of O.J. Simpson event for the modern world — one in which a heavily publicized death leads not to water-cooler debates about guilt, innocence and ill-fitting gloves but a worldwide protest movement about racism, structural inequality and the rightful shape of police-community relations.

By airing the trial, Court TV will take a system that protesters say is rigged against people of color and show it in an uncommonly up-close way. This will mark the first time ever in Minnesota that a judge has authorized cameras to show a full criminal trial.

“I don’t want to make it sound like Court TV is an engine of social change,” said Michael Ayala, a veteran Court TV personality who will be one of the journalists covering the trial. “But by bringing the truth of what’s going on in the courtroom, people will see behind the curtain into how the police operate. They’ll see what happened that day. They’ll see the full story.”

Yet some also ask whether televising the proceedings will really lead to a new and deeper understanding of the criminal justice system — or to the kind of business renaissance Court TV is hoping for. Simply seeing the system, these critics say, is a far cry from addressing what ails it, and turning the trial into slick television could undermine the seriousness of its stakes.

The network had spent months working with the court to allow cameras, an effort Chauvin’s lawyers joined by filing a motion last year seeking that permission. They asked Hennepin County District Court Judge Peter A. Cahill to issue an exception to a Minnesota rule barring video and audio transmission from courtrooms unless all parties agree, arguing that coronavirus-related capacity restrictions would violate Chauvin’s right to a public trial. The prosecution objected.

In a landmark ruling in November, Cahill agreed to allow the cameras, saying the intense public interest and coronavirus limitations combined to form a scenario that “not only is abnormal — it is in fact quite unique.”

Court TV will be allowed to place cameras at three vantage points in the Hennepin County courtroom. The network will offer by far the best way to follow the trial. Court TV’s cameras will be the only ones allowed in the courtroom; any other networks wishing to show footage must pick up its feed. Only two other media outlets will be allowed in the courtroom at any given time; all other journalists can watch Court TV’s feed from a media center across the street. Floyd’s family is restricted to just one seat in the courtroom. The network is planning about 14 hours of trial coverage each day.

“The Scripps motto is ‘give light and the people will find their own way,'” said Adam Symson, president and chief executive of E.W. Scripps, Court TV’s parent company. “The trial for Derek Chauvin is, at the end of the day, a trial that needs as much light shed on it as possible.”

Like those at the network, Symson says a live TV broadcast will be far more valuable than summaries from news stories and social media. The company is not charging for any live footage, offering it up in a kind of civic open-source gesture to any outlet that plugs in — a move that will, of course, also burnish Court TV’s stock among other news outlets.

It’s understandable why Court TV would want to hark back to its Simpson heyday. In 1995, the nation was riveted by the network and its broadcast of a downtown Los Angeles courtroom, day after intense autumn day.

But distinctions between that case and Chauvin’s suggest this could be a tougher television sell. Though there are three cameras to that trial’s one, Cahill has imposed several restrictions that will limit the emotional splash factor. Cameras will not be allowed to zoom in on Chauvin’s table, and Floyd’s family cannot be shown in the gallery. If any of those relatives choose to testify, Court TV can air the audio but can’t show the witness without their permission.

The Chauvin trial also lacks the Simpson case’s tabloid elements — and, given the video footage, much of the mystery. The defense, in fact, is expected to focus on more technical issues such as cause of death, with the medical examiner concluding Floyd had fentanyl in his system. In a recent Zoom production meeting, Vinnie Politan, Court TV’s lead anchor, and Julia Jenaé, one of its lead reporters, hashed out how to present to viewers the arcane legal question of “superseding” and “intervening” causes in Floyd’s death.

“I don’t feel people had the same emotional connection to O.J. Simpson,” Jenaé said in an interview from Minneapolis, where she has already begun broadcasting. “They were interested because of his celebrity. George Floyd was a regular person.”

That makes this trial much more personal for many viewers, she said.

Court TV once ruled the cable roost. Under lawyer-journalist Steven Brill, who launched it in 1991, the network turned figures like Johnnie Cochran, Marcia Clark and the Menendez brothers into reality stars and transformed sand-dry legal proceedings into must-see soap operas. Court TV personalities like Ayala, Politan and Nancy Grace sometimes became as famous as the people they were covering. The network grew into a cultural and ratings powerhouse.

But in 2005, executives at part-owner Time Warner began watering down legal coverage, thinking entertainment programming had more revenue upside. The Turner parent company became full owner in 2006, and in 2008 relaunched Court TV as the reality channel truTV. Though consumer interest in legal themes on television continued to skyrocket, Court TV came to be seen as an outdated curiosity, a 1990s force as influential but irrelevant as grunge.

Tufts, who along with several other Turner veterans spent years looking for backers of a revived network, didn’t give up. In 2018, executives at Scripps subsidiary Katz Broadcasting stepped in. Armed with the Court TV library and trademark, they rehired some of the original talent and in 2019 relaunched it as an over-the-air channel in markets where Scripps, with strong journalism roots, owns stations, and as a cable network in others. Though it shares its name with the original version, the new Court TV is leaner with more of a start-up vibe than its earlier corporate incarnation.

Court TV officials say the network is available in 93 percent, or 112 million, of U.S. television homes. A free Court TV app is also available on many major streaming platforms.

For all the notoriety it received, the original Court TV could be an enigma, swinging from the consequential to the prurient. It heavily covered the police abuse trials of the Rodney King and Amadou Diallo cases. But it also went long on the trials of serial killer Jeffrey Dahmer, Scott Peterson and other pulpy subjects.

The new edition can still feature those polarities. At the meeting, producers went from discussing recap coverage of Donald Trump’s impeachment trial to talking about a man accused of ambushing his wife in the shower. Some worry the Chauvin trial could serve drama more than it does justice; a recent trailer slickly touting its coverage prompted titters among some reporters covering the case.

But Court TV executives say the revived brand has a solemnity befitting this activist age.

“There was a time I think when Court TV took on more the flavor of entertainment,” Tufts said. “We are more drilled down to the original mission. We want to show the reality of the courtroom, not reality television.”

Grace Wong, a senior field producer who led the network’s efforts to get its cameras into the trial and will help run coverage from Minneapolis, said she understood why people worried about too much hoopla. But she said those fears overlooked the role the network can play in the 21st-century journalism landscape.

“It’s particularly important in this age of fake news, of campaigns of disinformation, that people feel like they have a place they can rely on,” she said by phone from Minnesota. “We don’t tell you what to think. We just turn the camera on and let it play out.”

Like other Court TV producers, she used the word transparency as the reason for broadcasting the trial.

Yet some observers are critical of this rationale, saying it merely offers a fig leaf to a biased system.

“I think transparency is bull,” said Todd Boyd, a professor of race and popular culture at the University of Southern California who has studied the interaction of television and social justice. “If you buy into the concept, you’re buying into the bull, because you’re accepting the fact that this is a legitimate process that’s blind, with everyone having equal opportunities. It’s a way of justifying the system.”

Boyd said he felt any discussion of Court TV as a public service also missed the point. “Of course they’re going to try to make it sound magnanimous. But they’re trying to reboot the popularity of a network. That’s the motivation.”

That goal will not necessarily be easily achieved. Consumers have not demonstrated of late that they wish to follow trials closely, and if they do, social media offers a quicker way, with more engagement. Experts see pitfalls along Court TV’s business path.

“Established brands have never had it better in the entertainment industry, and that’s something Court TV has proved they very much have,” says Bruce David Klein, a television producer and cable expert who has worked frequently in the medium. “But the question any cable network that’s trying to really get its viewership up has to ask is, ‘What can we do to expand the bull’s eye?’ — what can you do to go beyond attracting the narrow group of people who will always watch you and make advertisers want to spend money on you?”

He said those dollars may not necessarily flow to Court TV because trials, especially fraught ones, don’t appeal to many brands; they prefer the safer precincts of sports and scripted programming. “Criminal justice is just a challenge when it comes to sponsors,” he said.

Symson, the Scripps leader, said the company has found many of the same advertisers as traditional news channels. He disputed the idea that transparency isn’t meaningful.

“I summarily reject that,” Symson said. “I believe strongly that the opportunity for the public to bear witness to the inner workings of our justice system is exactly what’s necessary, warts and all.”

In a similar vein, the network could face criticism that it is being too dispassionate in an era, and on a case, when many call for activism. Jenaé said it’s a balance she’s grappling with.

“Our job is to stick to the law, stick to the facts, and tell you what’s going on,” she said. “But of course we also have to acknowledge the emotional toll the [Floyd] video has taken on everybody who watched it.