Madison Cawthorn wants to get the GOP on Twitch. Will it work? 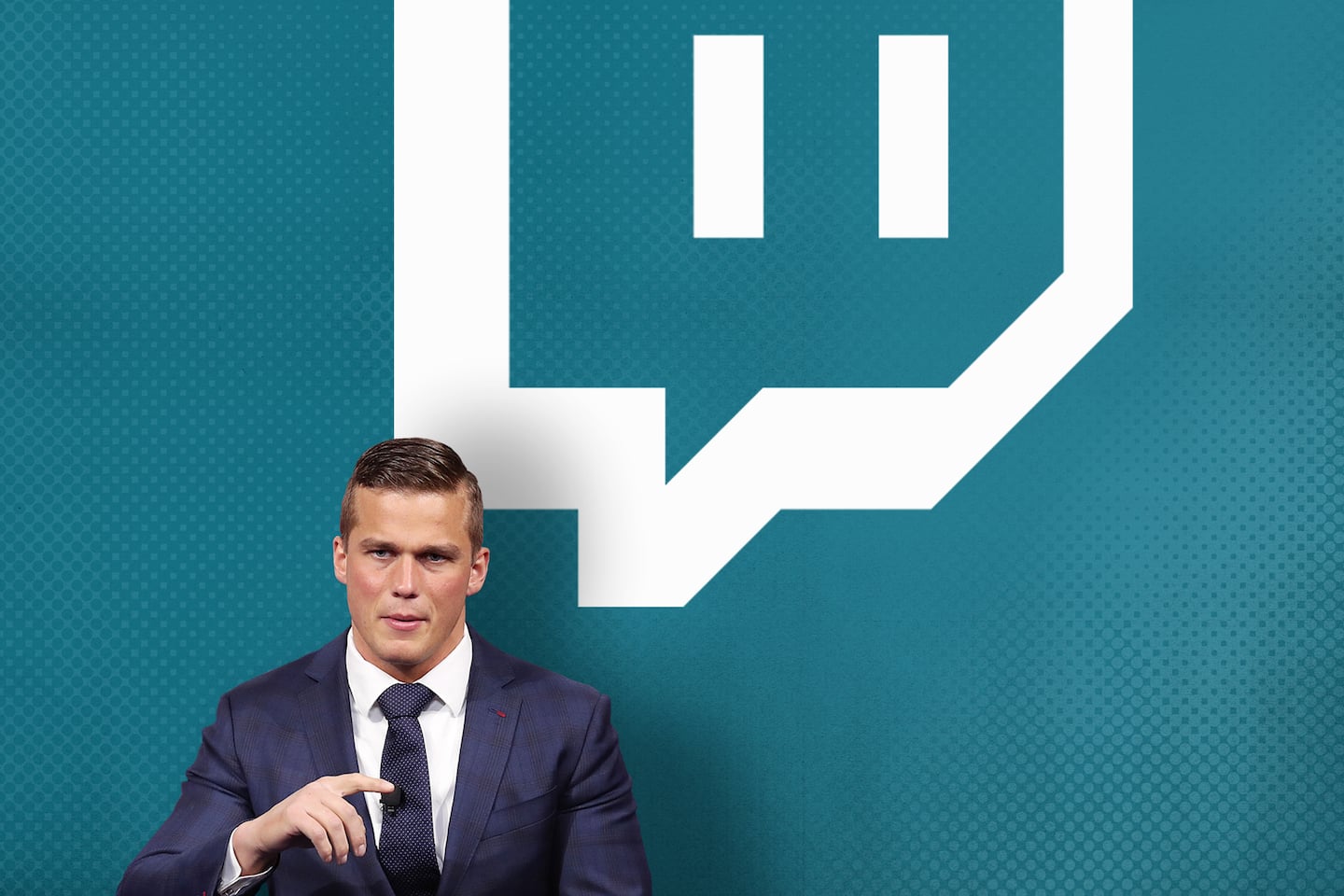 Viewers flocked to the stream, peaking at more than 400,000 people watching concurrently. It was one of the most-watched broadcasts ever for the live-streaming platform and also the most visible example of a politician adopting Twitch to reach potential voters.

With more than 30 million average daily users and an audience primarily in the 16-34 age range, Twitch is an appealing platform for those trying to engage with young voters. During the presidential primary, Sen. Bernie Sanders (D-Vt.) started a Twitch account. Now, in the wake of the 2020 election, the platform is being eyed by those on the other side of the aisle, most prominently newly elected 25-year-old congressman Madison Cawthorn (R-N.C.).

“I think it’s a way we can humanize ourselves,” said Cawthorn, who views Twitch as a tool to engage with those who may otherwise shun politics. “They’re not going to come to a GOP meeting or a Democratic Party meeting in their hometown … but you know what, if you’re watching somebody own [dominate] a bunch of noobs, you’re gonna watch that and enjoy it, and it’s something that you can relate to. … And then you’re more likely to listen to that person talk about the politics of the day, no matter what side of the aisle you’re on.”

Though he does not yet have a Twitch account, Cawthorn’s spokesman Micah Bock said the congressman and his team are “trying to figure out the best time to work on that angle without interfering with his congressional schedule.” Should Cawthorn follow in Ocasio-Cortez’s footsteps and join Twitch, it would prompt a number of intriguing questions around the live-streaming site’s use as a political platform.

The potential of politics and streaming

Twitch, which is owned by Amazon, whose founder Jeff Bezos owns The Washington Post, appeals to some politicians as a way to reach millennial voters, who comprise the country’s largest voting group. Cawthorn, the youngest member of Congress, has expressed frustration at the aging demographics of his party’s base, calling the Democratic edge in young voters “a generational time bomb” in an interview with the New York Times. He has repeatedly blamed the GOP for its failure to understand social media and the digital world, and positions himself as a much-needed corrective to the future of the party.

Speaking to The Post, he said he admires Ocasio-Cortez’s use of Twitch, a website that averaged 2.8 million concurrent viewers in January, making it more popular than most TV channels.

“I’m meeting people where they are,” Cawthorn said of his social media use on platforms such as Twitter and Instagram. A gamer himself, who says he was once into “World of Warcraft” and “Age of Empires II,” Cawthorn sees Twitch as a way to get his conservative ideas in front of a larger audience.

Morgan Zegers, a 24-year-old conservative influencer and founder of the nonprofit Young Americans Against Socialism, agreed developing a presence on Twitch would make sense for politicians.

“Twitch and any other long-form live-streaming style of platform is really where the future is,” she said. “People our age specifically want relatability in politics. That’s what our generation wants right now, because it makes us feel like we’re talking to our friends.”

Zegers, like Cawthorn, praised Ocasio-Cortez for her use of social media: “AOC goes on and bakes cookies, or goes on and plays ‘Among Us,’ and she’s not only becoming some politician, or some stranger on the Internet, she’s really transforming into a friend.”

Micah Sifry, an author and civic technology expert, said that innovation in political strategy is often driven by the party that lacks power — who have less to lose and more to gain by trying new approaches. “The Left was doing better with blogging than the Right initially,” Sifry said. “Twitter came along at a moment when Obama was in [office], and the Right actually got an early lead in organizing conservatives on Twitter faster than the Left did, because that was a moment when the left’s techno-political system was more established.”

While Twitch’s draw in that regard is obvious, the permissible conduct on the platform by politicians or government affiliated organizations is less clear.

For example, while misinformation or skewed facts have become common in political dialogue, some forms of misinformation are against the Twitch “Community Guidelines,” and can result in anything from warnings to temporary or even permanent account bans. To that end, the rhetoric that is common at political rallies could be seen as taboo by Twitch moderators should they believe it encourages or incites self-destructive behavior, incites violence, attempts or threatens to physically harm others, or could be considered hateful conduct or harassment.

“Politicians on Twitch must adhere to our community standards like anyone else,” Twitch spokeswoman Gabriella Raila said. “We do not make exceptions for political or newsworthy content, and will take action on content that violates our rules when it is reported to us.”

Twitch banned former president Donald Trump’s account on the site on the basis of “incendiary rhetoric” he posted on Twitter on Jan. 6 during the riot at the Capitol. Twitch’s guidelines state that “threatening to or encouraging others to commit acts that would result in serious physical harm to groups of people or significant property destruction” is a bannable offense.

Cawthorn supported Trump’s baseless claims of election fraud and voted to object to the certification of some presidential election results. At an event sponsored by conservative advocacy group Turning Point USA on Dec. 21, Cawthorn told the crowd the election had been stolen.

A recent Washington Post report chronicling the congressman’s rise to office included multiple instances in which Cawthorn had either lied or provided misleading details about his education, work history and even the car accident that left him partially paralyzed. Additionally, the story cited three women on the record who recounted instances in which they alleged they were subjected to unwanted sexual advances and referenced a letter signed by more 150 students at Patrick Henry College accusing him of being a sexual predator. Cawthorn denied those claims.

Twitch’s terms of service include robust provisions that would require Cawthorn to be mindful of his words if he wants to have an enduring presence on the platform. Its Hateful Conduct and Harassment Policy, for example, states that “Twitch should not be used to incite, encourage, promote, facilitate, or organize hateful conduct or harassment, even against targets off the Twitch services, and doing so will result in enforcement action taken against the relevant accounts.” Some of Cawthorn’s past statements, had he said them on stream, could easily run afoul of these policies.

“We want Twitch to be the safest and most welcoming place to create and participate in live entertainment, and we believe Twitch is made better when diverse voices of all kinds are represented,” Raila, the Twitch spokeswoman, said. “That said, Twitch is a community, not a free speech platform, and our policies set boundaries about what’s acceptable to ensure a safe and inclusive environment for all.”

The peril of politics and streaming

Both Democrats and Republicans have bumped into issues around their statements or actions while on stream.

The U.S. Army endured a chilly reception when it commenced a streaming effort around its esports team. Jordan Uhl, an activist who handles Twitch streaming for the progressive advocacy group MoveOn, made headlines by getting banned from the Army’s Twitch channel when he posted a question in the chat asking viewers about their favorite U.S. war crime. The Army’s Twitch channel was then accused of violating Uhl’s First Amendment right to political speech, while they in turn claimed Uhl was breaking Twitch Community Guidelines by harassing them. Afterward, Ocasio-Cortez called for banning the military from recruiting on Twitch. Her proposal was voted down with bipartisan support.

Hasan Piker, a former member of progressive YouTube news and opinion show The Young Turks, has amassed more than 1 million followers on Twitch but was briefly banned in 2019 for saying that “America deserved 9/11.”

Both incidents are emblematic of the awkward, wire-walking act by social media platforms as they attempt to tamp down the spread of false information and inflammatory rhetoric.

Cawthorn’s aspirations would provide an interesting litmus test on whether a conservative, pro-Trump voice could achieve the same success on Twitch as progressives like Ocasio-Cortez.

“You can expect a reaction similar to how people responded to the military — you’re going to have hordes of young lefty Zoomers just bombarding [Republicans on Twitch] with criticism,” Uhl said.

“That’s always a threat,” Cawthorn said when asked whether he’d be worried about having his account banned for violating Twitch’s terms of service.

Despite that threat, Cawthorn still sees a space for conservatives on Twitch. “I honestly have never seen it as a partisan platform, or even a political platform,” he said. “I just see it as a way to have outreach. … I wanna see somebody yell the F word because they got shot from behind in a video game — it’s like, ‘wow, I can completely relate with that.’”

Ethan Davison is a freelance writer covering games, books, and culture. His work has recently appeared in Medium’s FFWD, The Outline, and The Los Angeles Review of Books. Follow him on Twitter @eadavison_.

Five points for anger, one for a ‘like’: How Facebook’s formula fostered rage and misinformation

‘Guardians of the Galaxy’ is a better movie than the movies. But it could be a better game.

A whistleblower’s power: Key takeaways from the Facebook Papers