When Paige Bueckers and Jalen Suggs faced each other, it was ‘just amazing stuff’ 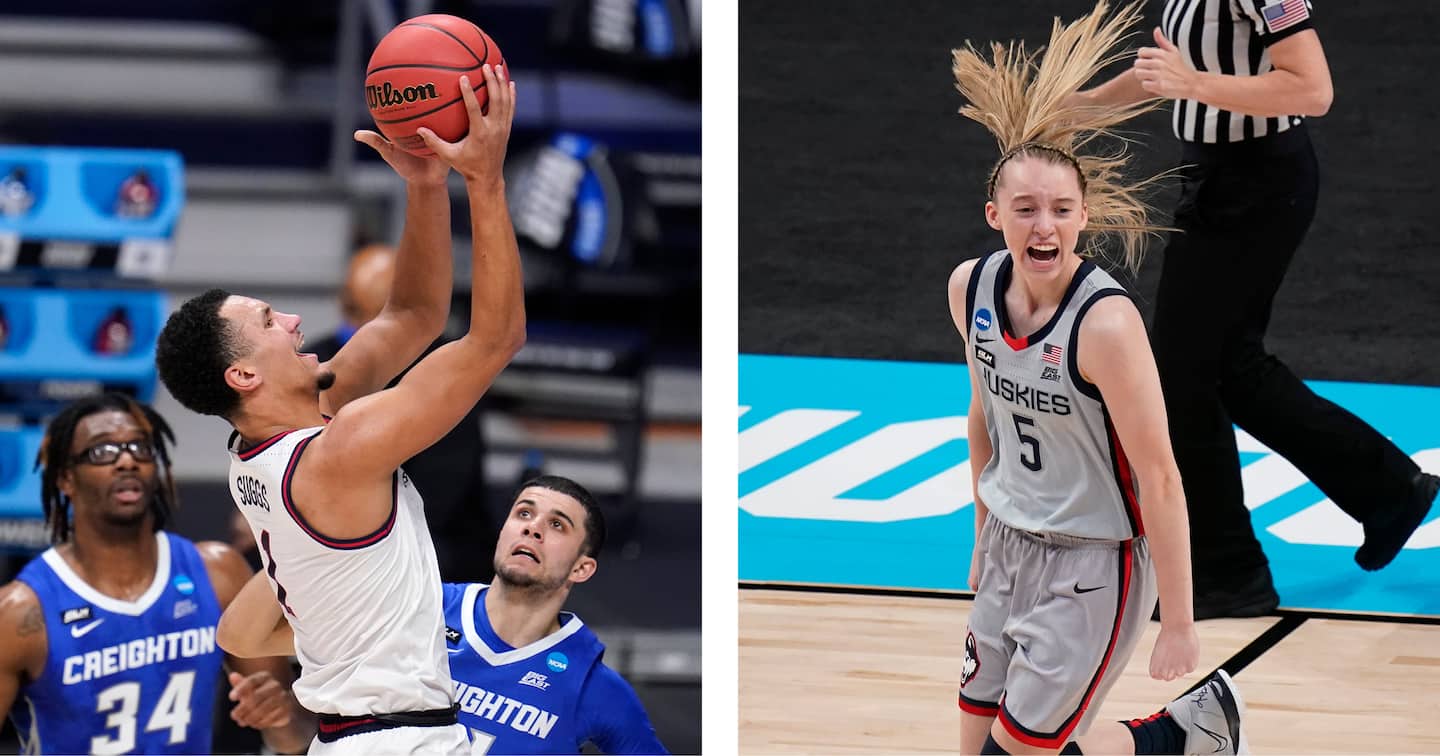 The world now knows Paige Bueckers and Jalen Suggs as freshman phenoms, the outrageously talented point guards leading the top-ranked collegiate teams in the country — the Connecticut women and the Gonzaga men — to their respective Final Fours this weekend. The close friendship they have built since elementary school is a thread connecting the two tournaments. On Tuesday, for instance, Suggs credited a FaceTime session with Bueckers the night before for getting his mind right ahead of the Bulldogs’ win over Southern California in the region final.

“I’ve been kind of struggling, trying to get my footing in these tournament games,” Suggs said. “She kind of said some words — it kind of got me uplifted, got me going.”

Though they have followed parallel tracks, emerging from the same Twin Cities hoops scene, amassing high school state championships and USA Basketball gold medals and leaving for opposite coasts last year as two of the top recruits in the country, those tracks have never crossed on the basketball court in any official capacity. Bueckers and Suggs, both 19 years old, have played in front of tens of thousands in person and tens of millions on TV — those audiences, whenever possible, including whichever one of them wasn’t playing — but always separately.

Perhaps only a few hundred people, well connected enough to get the heads up on one of those rare summer days and smart enough to head straight to the Bloomington Activity Center gym, have witnessed the ultimate showdown: Bueckers against Suggs, head to head, five on five, full court. It may have been just a scrimmage, ahead of the AAU national championships, her Metro Stars against his Grassroots Sizzle team, but no one who saw it is likely to forget.

“Just amazing stuff: back and forth, trash talk on both sides,” said Tara Starks, the coach of Bueckers’s Metro Stars AAU team, whose idea it was to invite Suggs’s boys team to scrimmage her girls ahead of the July championship tournament. “Paige would knock down a shot and talk a little trash. Jalen would come down and dunk. They would always go after us hard — running through the middle of the lane and dunking and talking trash. No letup at all. But it would push our girls and get them ready to play.”

Mia Curtis, Suggs’s cousin and Bueckers’s former AAU teammate, recalled the trash talk would begin long before those two stepped on the court and would continue well after the scrimmage was over.

“They would guard each other, so you’d get some of that one-on-one action,” she said. “They were both coming to play. They both took over on their end of the floor. Sometimes you had to just stand by and watch. It was awesome.”

Curtis, now a freshman guard at Dartmouth, stands at the pivotal intersection of this unusual friendship story. Though Bueckers and Suggs had known each since fourth grade, when Bueckers’s younger brother played on a youth team with Suggs, it wasn’t until the AAU years, with Curtis as the common denominator, that they became JalenPaige — so inseparable they were often spoken of as one entity. It was a bond strengthened through the shared experience of elite hoops and the growing realization, as their talent separated them from the others, that they were headed for great things.

“High school teams, AAU teams, then USA Basketball national teams — even though they weren’t on the same teams, all those similar experiences brought them a lot closer,” said Bob Bueckers, Paige’s father. “It was just sort of a growing realization: ‘Yeah, this is happening.’ They’ve just been on these parallel paths for a while now.”

Paige would show up at Jalen’s Minnehaha Academy football games — he was also a highly recruited quarterback, the Minnesota Gatorade player of the year for both football and basketball. He would show up at Paige’s basketball games, occasionally invited into the locker room to celebrate championship victories. For a Sadie Hawkins dance at Hopkins High her junior year, Bueckers asked Suggs to be her date, and he accepted — perhaps the most basketball talent that has even appeared in a single, cheesy school-dance photo.

Eventually, the parallels between Bueckers and Suggs moved beyond the obvious — same position, same skill sets, same graduating class, born 4½ months apart in different corners of the Twin Cities — and into the metaphysical: Sometimes it was hard to know where one ended and the other began.

“They were like the male and female versions of each other,” Curtis said. “Certain interactions you’d have — I’d just walk away and be like, ‘Oh, my God. Was I talking to Paige or Jalen?’ ”

Stories of their shared competitiveness became legendary. Bob Bueckers tells a story about a time when he was coaching the elementary school team and having to explain to Paige, inconsolable and frustrated, that league rules required him to bench her for part of the game. Larry Suggs, Jalen’s father, has recalled playing in a men’s league game when Jalen, 4 years old at the time, came down out of the stands and offered to fill in for an injured grown-up.

Once, when asked during a video shoot for youth basketball website BallIsLife.com to describe what they like about the other’s game, Bueckers and Suggs played rock-paper-scissors to decide who had to go first, a silly exercise that turned into an epic, marathon match — requiring a ninth round, Paige’s rock over Jalen’s scissors, to decide the outcome.

“You talk about an all-around basketball player who can do everything at a high level?” Jalen, forced to go first, said of Paige. “That’s her.”

“He’s the most competitive person I’ve ever met,” Paige said of Jalen.

This season, 3,000 miles apart from each other, in the midst of a global pandemic that has altered schedules and attitudes, Bueckers and Suggs have produced magical seasons with their own parallels. Suggs has led the Bulldogs to a 30-0 record, leaving them two victories from a perfect season. He is widely expected to jump to the NBA following his freshman year and is projected as a lottery pick.

Bueckers, meanwhile, became the first freshman to win the Associated Press women’s collegiate basketball player of the year award. She gets first crack at the national semifinals, with U-Conn. taking on Arizona on Friday night in San Antonio. Suggs and the Bulldogs get UCLA in their semifinal game Saturday in Indianapolis.

“They both lost so much because of covid,” Allison Tegeler, Curtis’s mother, said of Bueckers and Suggs, her nephew. “High school state championships. The McDonald’s All-American Game. Nike [Hoop] Summit. So to be able to see them complete this season and get to this level has been really gratifying.”

There is still one thing Bueckers and Suggs have never managed to do: suit up on the same team. They may have missed their best chance a few years ago, when they both led teams in the popular Gus Macker 3 on 3 Basketball Tournament. They conspired to form a coed team together, with Curtis as their third, and lay waste to the field the next time the tournament came around. But life being complicated and time being short, they never managed to pull it off. The world is all the less for it.

“It would have been amazing to see,” Curtis said. “Paige and Jalen on the same team? I mean, that’s unstoppable.”

Especially for those lucky few who have seen them go head to head, the prospect of a Bueckers-Suggs on-court partnership — that only thing that could possibly be better — remains out there as some distant fantasy. You can only hope it comes off at some point and that someone in the know gives you a heads up.