Baseball is back in Washington with a gift for Nationals fans: A normal day at the park 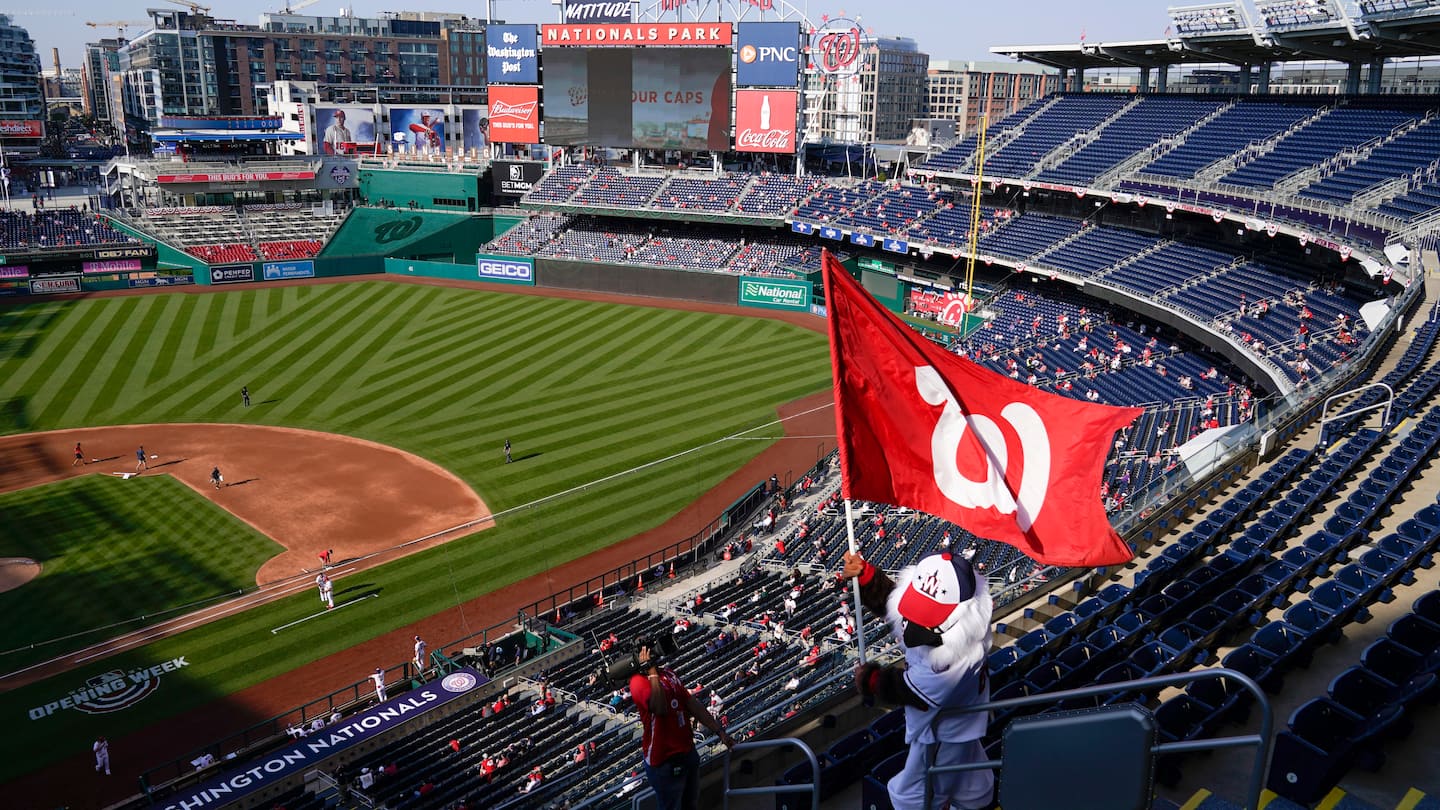 Ronald Acuña Jr. of the Atlanta Braves lashed Scherzer’s pitch deep over the left field fence, handing the Washington Nationals a deficit before the lingering smoke from pregame fireworks over the scoreboard had dissipated. It may have stunned the red-clad fans spread across the ballpark, but it could not dampen their delight at being there.

The Nationals opened their season and welcomed fans into their home ballpark for the first time since Oct. 27, 2019, Game 5 of the World Series they would win three nights later in Houston. The game followed a delay caused by a handful of Nationals players testing positive for the coronavirus. A chunk of the team’s roster was either recovering or quarantining because of close contacts, a reminder of looming uncertainty. About 5,000 masked spectators dotted the seats, a dollop of normalcy and a hint of the potential joy to come later this summer.

“It’s been a long time coming,” Nationals Manager Dave Martinez said earlier Tuesday afternoon. “For me, this is only a start. I’m super excited to see the fans. It’s good for us, it’s good for baseball, and it’s good for the city.”

People stood in line at stadium gates on purple circles spaced six feet apart. They graced Nationals Park for the first time with shirts, jackets and gold-trimmed jerseys commemorating the 2019 World Series. Fans roamed the concourse in No. 11 Zimmermans, No. 31 Scherzers, No. 22 Sotos — and one man wearing a white No. 19 jersey with FAUCI stenciled across the back shoulders.

Monitors throughout the park cycled through rules that seemed both requisite and incongruous with baseball. No eating or drinking in the concourse. No high-fives. A “two-strike policy” on mask-wearing made it clear that fans had one warning to keep their face covered before they could be removed for noncompliance. A mannequin at a souvenir shop wore a Nationals mask.

“I won’t be sitting in my usual seats, but it doesn’t matter. It’s baseball,” said fan Joyce Zickler, standing in the center field plaza minutes before the Nationals’ 2019 World Series champions flag was raised for the first time this season. “It’s a great day. For those of us who have been away from baseball, in quarantine, and didn’t make it to Florida for spring training, it’s one of the most normal days you can imagine after a year of nothing close to normal. It’s just great.”

About 40 minutes before first pitch, Scherzer emerged from the dugout and walked toward the bullpen behind the right field fence. Fans stood, clapped and roared, their applause echoing off sun-drenched blue seats. In its enthusiasm, volume and bonhomie, it sounded like parents cheering at a school play.

When the Braves were introduced and stood along the left field line, they did not boo (except a little for Nationals nemesis Freddie Freeman). The Nationals were introduced to cheers, the loudest reserved for relief pitcher Daniel Hudson, who heaved his glove after recording the final out of the World Series, and starting pitcher Stephen Strasburg, the homegrown phenom who was the World Series MVP.

During a solemn video board montage, public address announcer Jerome Hruska said, “The empty seats remind us this is not over, and we are in this together.” The crowd observed a moment of silence for more than half a million Americans who have died of covid-19.

Nationals fans cling to the World Series so closely, perhaps, because they have been denied an opportunity to celebrate it. The pandemic wiped out Opening Day last year. When Major League Baseball implemented a 60-game season in empty ballparks last summer, the Nationals wanted to wait until fans returned for a full-fledged celebration. They may not have realized attendance would be so limited once they did.

The Nationals sprinted to their positions. Martinez stood outside the dugout, microphone in hand. “Nationals fans, welcome back,” he said. “Welcome home. Let’s play ball!”

Acuña’s blast brought murmurs but not boos. Fans bought hot dogs, scribbled in scorebooks and screamed. They had waited a year to come back to the ballpark, and then they had waited some more.

“I’m going to focus on what we need to do to win,” Martinez said Monday. “But in the back of my mind, I’m going to worry about these guys until we get them back and we know that they’re 100 percent healthy and can come back and put their uniform on and help us win on the field. It’s tough. But since last year, playing, we knew this could be a possibility. You don’t ever want it to happen. It happened. I’m grateful those guys are doing well and we’ll be playing baseball.”

The cases led to competitive concerns conceivable only in the past 13 months. The raft of unavailable players meant the Nationals’ Opening Day roster included nine prospects and journeymen who otherwise would have started the season unemployed or at Washington’s alternate site — a temporary home for minor leaguers necessitated by coronavirus restrictions — in Fredericksburg, Va. Scherzer, a Cy Young Award winner known for intensity and detailed preparation, threw to Jonathan Lucroy, a veteran the Nationals signed Saturday.

“This is who we are,” Martinez said. “Some of the young guys get an opportunity to go out there, play on a big league level. We’re excited about that.”

When they play, they will hear real cheers and see real faces in the seats.

“It’s a long time coming,” said Nationals fan Charles Jackson, who arrived at the center field gate with his 10-year-old son, John, more than two hours before first pitch. “Thank God for the vaccine, so I feel a whole lot more comfortable coming out here with that. It’s nice to be able to be outside and see some live baseball again.”

Scott Allen contributed to this report.