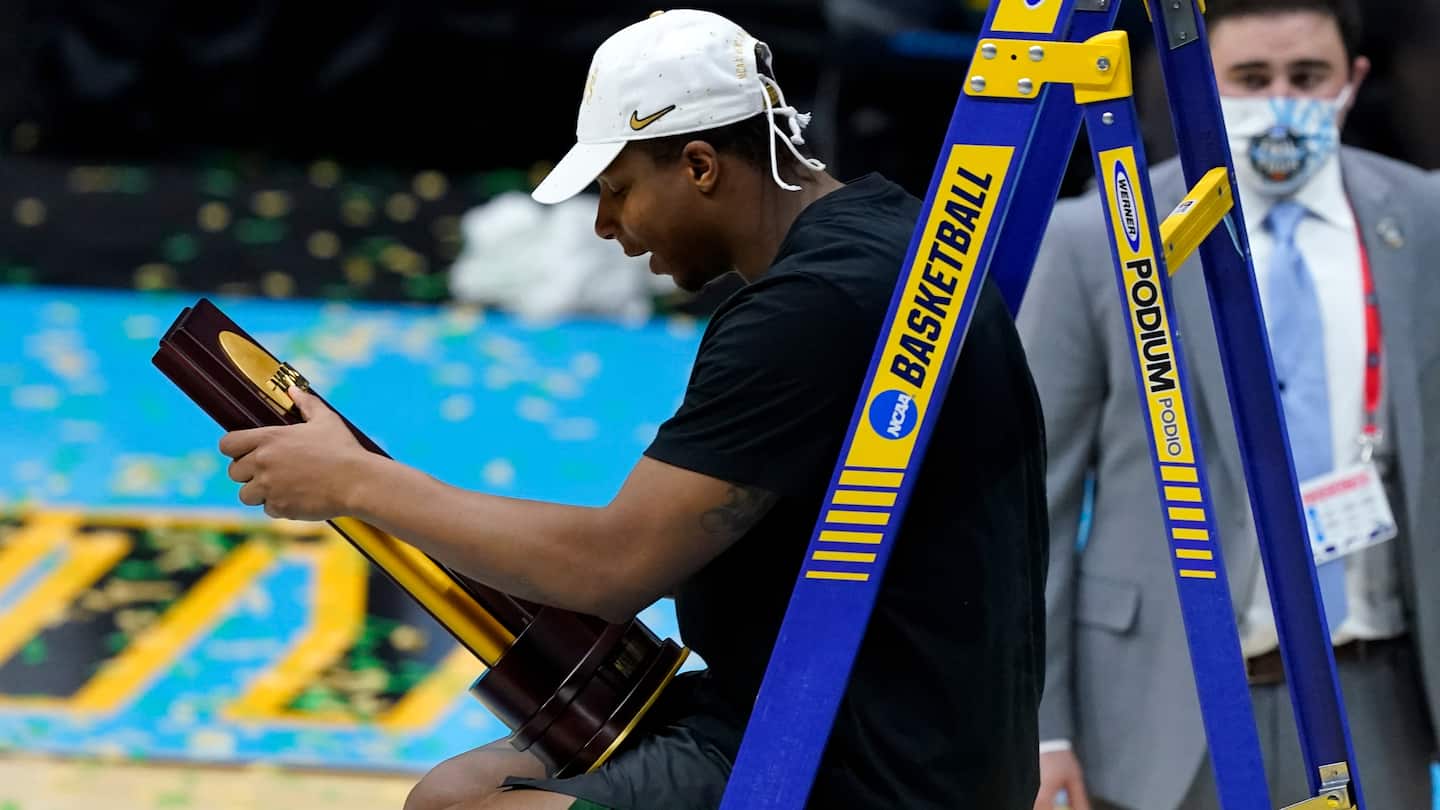 A fundamental fact has been vividly on display for the past month of tournament play: The NCAA sells kids commercially without their consent for more than $1 billion per year. Athletes, in challenging this peonage debt-servitude system like never before in lawsuits and campaigns such as #NotNCAAProperty, have raised the question of whether the NCAA should continue to exist in its current power configuration. The answer is no, for the simple reason that the governing body has utterly perverted the definition of “amateur.”

For the love of. That’s what it means.

Where is it written that to play a game for love, collegians must be strip-mined by universities of their worth and economic rights, and forced to fulfill commercial agreements that they aren’t even entitled to read — for free? Suggs and McDonald have never signed a deal with AT&T, yet they just spent a month of their ephemeral and perhaps fleeting athletic lives peddling 5G cellphone plans for which they will not see a cent. Why? Because “amateurism.”

A fallacy undercuts every attempt to do what’s right and reasonable in collegiate sports: that if the NCAA is not allowed to practice contortions and extortions, our campus games will be “destroyed” as we know them. This is the argument the governing body has made for years, and with increasing desperation in the range of antitrust cases brought by collegians seeking to remove the NCAA’s vise-grip on them. “How do we know that we’re just not destroying the game as it exists?” Justice Sonia Sotomayor echoed cautiously during the Supreme Court arguments near the end of March Madness.

It’s nonsense, this fear that issuing a perfectly healthy correction to the organization’s acceleratively despoiling tendencies will collapse the collegiate system. And it’s time to put it to rest.

As historian Ronald A. Smith has written, “There was never a shining period, a golden era, of college sport when amateurism was upheld and when professionalism and commercialism were not in existence.” The first intercollegiate competition, he observes, was a crew meet between Harvard and Yale in 1852, paid for and staged by a railroad entrepreneur who wanted to see a contest. A thousand spectators turned up to watch, though it was held on the shores of a remote New Hampshire lake. That is what happens in a free market.

Justice Stephen G. Breyer rightly observed that college athletics “is not an ordinary product … and it’s only partly economic.” He added, “So I worry a lot about judges getting into the business of deciding how amateur sports should be run.” Actually, the court would be getting judges out of the college sports business by curing the NCAA’s proliferative tendency to price-fix, and to sell people and things it has no right to.

And while it’s at it, the court should ask the NCAA something: Has any player who has knocked down a shot in a tournament ever been permitted to read the NCAA’s TV-sponsor contracts?

There has always been an uneasy but necessary balance between collegians’ games and the commerce that pays for their staging. That balance has been lost when it is no longer a break-even and equitable system that supports as many collegians as possible but instead disadvantages them wholesale. In the past two decades, NCAA presidents have abused their tax-exempt nonprofit status to make deals such as the $8.8 billion contract extension with CBS-Turner in 2016 that gave TV networks and corporate sponsors a broad range of rights and controls. They became revenue hounds who built extravagant $55 million sports palaces while cheating the athletes who fill them.

Case in point: Oregon’s Sedona Prince, whose massive social media following helped expose chronic inequities in the NCAA women’s tournament. As an 18-year-old freshman at Texas, she badly broke her tibia and fibula. After multiple surgeries, she transferred to Oregon, by which time her medical bills were in the tens of thousands of dollars. Yet the NCAA denied her so much as a GoFundMe campaign to pay her bills, all while prospering off multimillion-dollar multimedia and marketing deals using player likenesses.

Prince, who not unnaturally became a plaintiff in an antitrust class action over the hijacking of her name and image rights, asks rhetorically, “If not us, who can rightfully claim that and profit from it?”

The athletic scholarship system is a well-intentioned one that should be preserved — it might just be the greatest opportunity for upward-gazing young people since the GI Bill. But that system is quite separate from, and in no way depends on, the NCAA’s corroded profit-hoarding structure. Aspirational kids will always play games — just try to stop them. And schools will always give them incentives to come to campus, because they enrich the environment. And others will always turn out to watch, just as a thousand people came to see that boat race 170 years ago.

The players will play, and the audiences will follow. Why? Because that part of the system is incorruptible and indestructible — the part that is for the love.