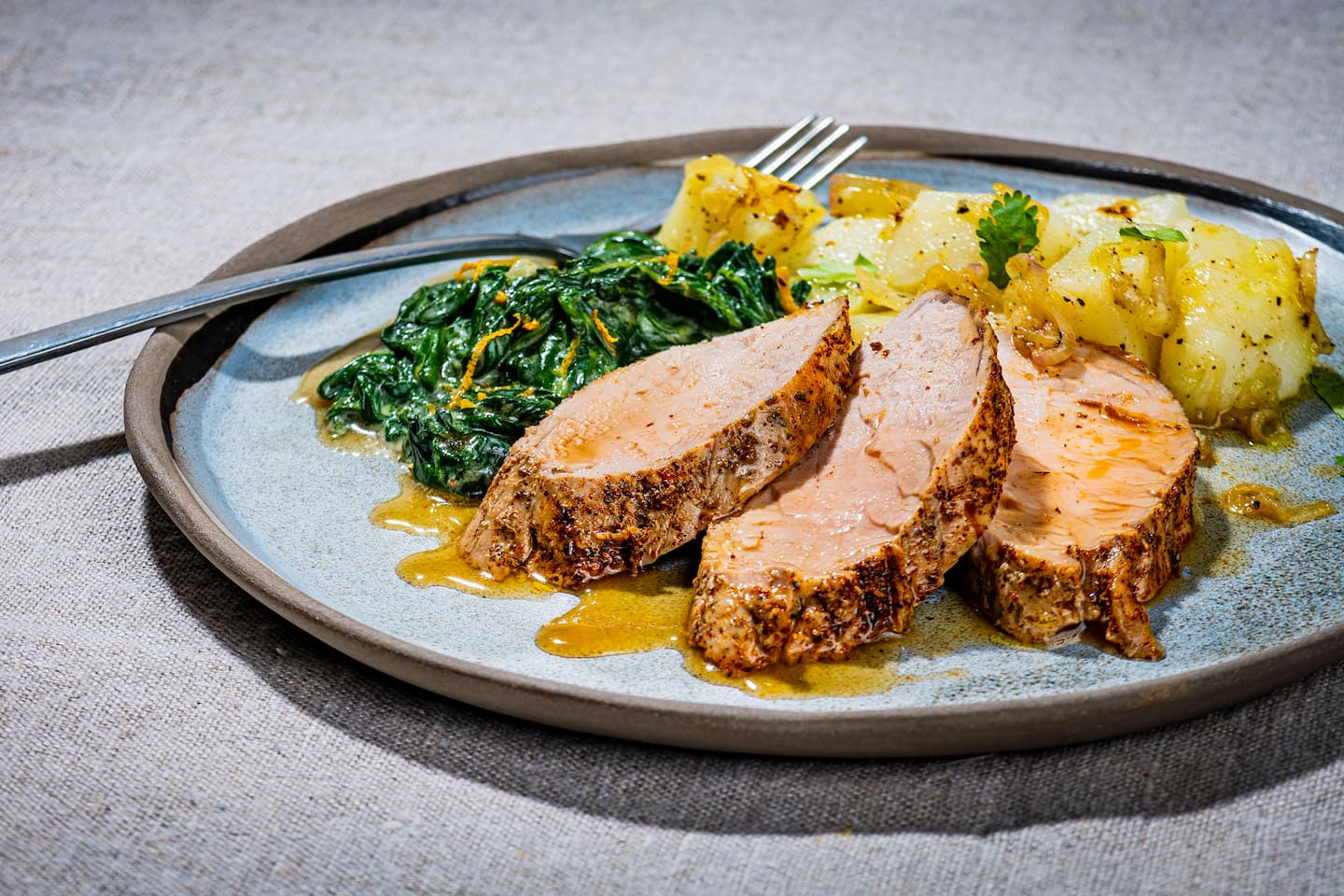 Sometimes it’s a few bars of a Héctor Lavoe song or the sight of a pile of large, bright green avocados that remind me of the island half of my family calls home. But, most often, it’s scent that jogs the images out of the dusty corners of my brain.

The peppery, slightly bitter smell of red-orange achiote oil. The earthy green of fresh cilantro or its bolder cousin, culantro. The buttery syrup dripping from a ripe mango; the dizzying slap of strong vinegar; the musky sweetness of fried green plantains; the deep, rich, garlicky smell of roasted pork.

I don’t eat nearly as much meat these days as I did when I was a kid, but the smell of pernil, Puerto Rican-style roasted pork, will always take me back to my grandmother’s kitchen. Heady with garlic and a blend of spices and herbs, pernil is a process, and while it’s very much worth the effort, I don’t always have the energy to make it. That’s how this Pernil-Style Pork Tenderloin with Mojo Potatoes and Coconut Creamed Spinach was born.

One day, while craving those flavors, I picked up a pork tenderloin. After rubbing it with a simple adobo of garlic, lime juice and spices, I roasted it in a hot oven until it was just cooked through, but still juicy and tender. Later, while flipping through Von Diaz’s 2018 cookbook, “Coconuts & Collards: Recipes and Stories from Puerto Rico to the Deep South,” I saw that she’d come up with a similar idea. Great minds, right?!

I added chili powder to my adobo, and a bit more garlic and lime than Diaz uses, but that’s the thing about pernil: Cooks make it their own. I’ve seen recipes include cumin, paprika, onions, pineapple, coconut milk, achiote or cilantro; other Puerto Ricans might disagree, but I’d say garlic is the only real constant. This recipe would be nice sliced, in fat sandwiches, but I suggest here a side of boiled potatoes in mojo sauce and coconutty sauteed spinach. It’s the kind of meat + starch + vegetable dish I grew up eating, but a bit more streamlined, and a touch less rich, too.

Pork tenderloin is an especially quick-cooking and lean cut of meat, but if you don’t eat pork you could use lamb, beef, white fish filets or a whole chicken here instead, adjusting the cooking time accordingly. If you don’t eat meat, rub the adobo over halved portobellos or canned, drained jackfruit and then roast until they start to crisp. The mojo potatoes are inspired by yuca con mojo, a traditional Puerto Rican dish using boiled cassava root or yuca; feel free to use yuca instead of the potatoes, or even roasted squash, boiled yams or steamed cauliflower. The other side here is coconut creamed spinach, which is really just quickly sauteed baby spinach with garlic and coconut cream. Feel free to use any chopped dark, leafy greens in place of the spinach, and if you don’t have or don’t want to use the coconut cream, you can omit it.

This isn’t a one-dish recipe, as you can see, but it’s written with efficiency in mind. You quickly marinate the pork — though you can let it marinate overnight if you’d like — and roast it while boiling the potatoes and making the mojo sauce. Let the pork rest, to preserve its juices, while you drain the potatoes and mix them with the sauce, and then make the spinach — it takes only a few minutes! — before slicing the pork and serving.

For the pork tenderloin

For the mojo potatoes

For the coconut creamed spinach

Pat the pork tenderloin dry, then cut 5 or 6 small, shallow slits into it with the tip of a knife — this will help the meat absorb the spices — and place it in the bag with the adobo. Massage the adobo into the meat until well coated on all sides. If you’d like, you can let the meat marinate in the refrigerator overnight or up to 1 day in advance.

When you’re ready to roast the pork, position a rack in the center of the oven and preheat to 400 degrees. Line a large, rimmed baking sheet with aluminum foil, place the tenderloin in the center of the baking sheet and roast for 15 minutes. Using tongs or a fork, flip the tenderloin and roast for another 10 to 15 minutes, or until it reaches an internal temperature of 145 degrees; the exact roasting time will depend on the thickness of the meat. Let it rest at room temperature for 5 to 10 minutes before slicing and serving.

Make the mojo potatoes: While the pork cooks, in a large pot over high heat, bring potatoes and a large pinch of salt to a boil in enough water to cover. Cook until tender, about 20 minutes. Tip the pot into the sink and drain out almost all of the water, leaving a few tablespoons in with the potatoes. Return the pot to the stove, off heat, but cover and keep warm.

Make the mojo while the potatoes cook: In a small skillet over medium-high, heat the olive oil until it shimmers. Add the onion, garlic and a pinch of salt. Cook, stirring frequently, just until the onion and garlic turn translucent, about 5 minutes. Remove from the heat and stir in the lemon juice and black pepper. Set aside until the potatoes are cooked.

Pour the mojo sauce over the hot potatoes. Cover and keep warm until ready to serve. Serve garnished with cilantro, if using.

Why are African American residents of this small town determined to block a Wegmans warehouse?

Fry tomatoes with chiles and garlic for a fragrant summer dish