Howard University, with a coach’s moxie and a superstar’s money, takes on golf 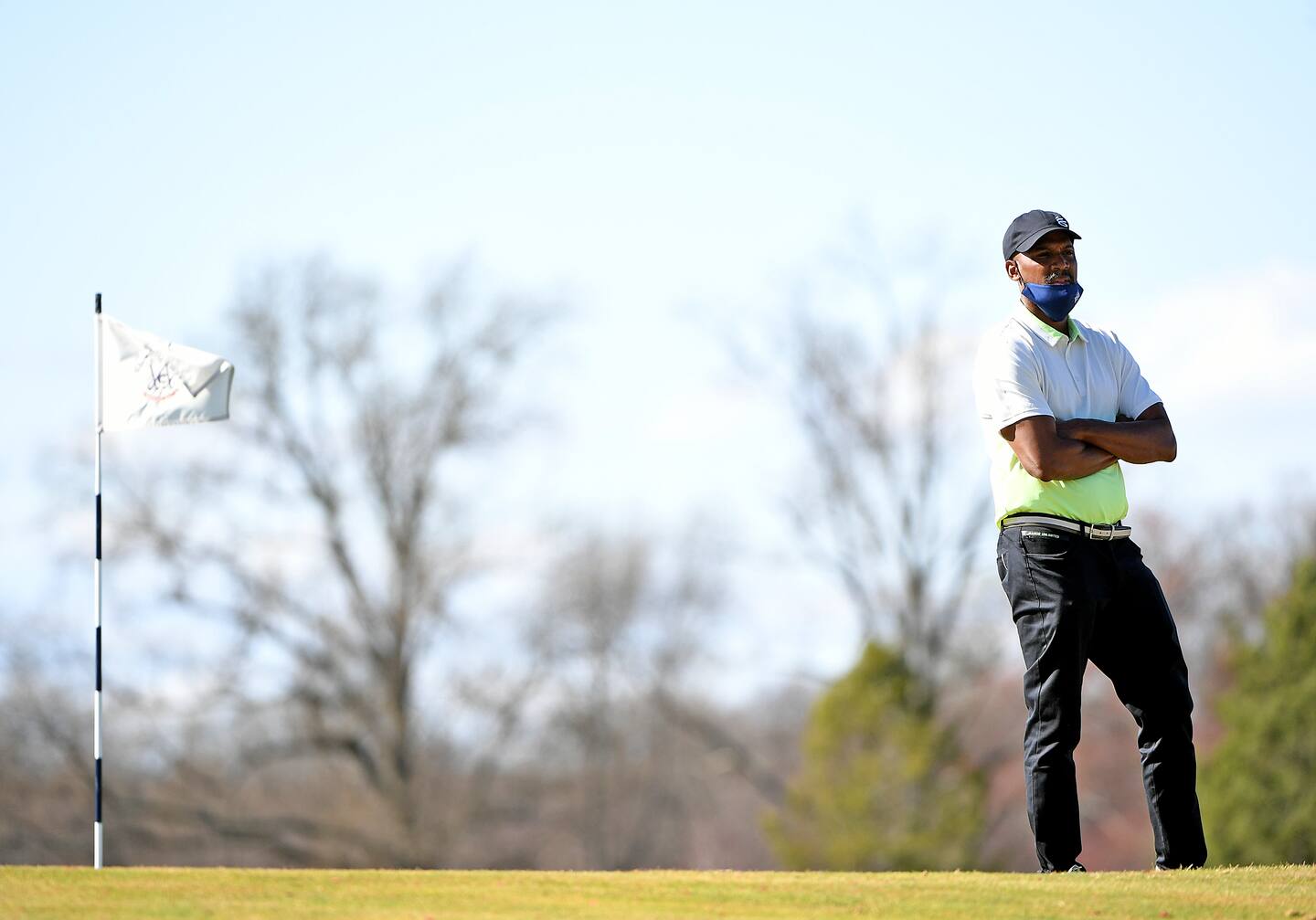 He’s wearing a Bison face mask that creeps below his graying mustache and a hat emblazoned with the logo of NBA superstar Stephen Curry. He towers from the top of the hill, arms crossed, mostly silent. Here — on any course, really — is where Puryear finds peace. If he had his way, he would get lost on its rolling hills and blend in with the Bermuda grass.

“Like a ghost,” Puryear says. “I’m okay with people not knowing that I exist.”

But Puryear, a 50-year-old Black man, sticks out in a sport still grappling with a centuries-old diversity problem. This week in Augusta, the Masters will honor Lee Elder, who broke the tournament’s color barrier in 1975. But nearly a half-century after Elder’s achievement, there are just four African Americans on the PGA Tour. It’s still rare to see a Black golfer in the NCAA, still a marvel to see young Black kids competing in a game where, according to one study, just 3 percent of recreational players are Black.

Puryear is trying to change all that. With help from the seven-figure donation Curry made to Howard in 2019, the coach is building a Division I men’s and women’s golf program. The donation will help sustain the program for six seasons, covering some scholarship costs, the head coach’s salary and those key-lime green shirts that some of the players are wearing this March afternoon. But with the team preparing for its first tournament, Puryear must handle everything else.

That includes securing somewhere for his golfers to practice their short game. While local programs such as Georgetown and Maryland have home golf courses, Howard doesn’t. So ahead of the team’s season-opening tournament, Puryear spent the week calling courses. Woodmont, in Rockville, agreed, giving Howard players an afternoon to practice before leaving for their trip.

His team’s been practicing for less than an hour when Puryear notices a white-haired man heading their way. Puryear watches as the man approaches a photographer shooting pictures and asks what’s going on. The curiosity, the looks, the questions: Puryear would rather be invisible, but his team gets this a lot.

“I’ve told them so many times,” Puryear says quietly, “how this is going to be.”

Growing up, Puryear wanted to be just like his dad. And since Samuel Sr. played golf, he wanted to as well. He loved the game like his father, despite the game not always loving people who looked like them back.

As a boy, his father made 60 cents a day for carrying “some racist clown’s golf bag,” as Puryear wrote in his self-published memoir, “Diamonds in the Rough.” Those stories from Black caddies angered him, but Puryear thought he could do something about it. When he was 12, he says, he made a vow to his mother.

“That I was going to change the game of golf,” Puryear recalls. “Instead of anger, I said: ‘Okay when I got older: I’m going change it.’”

He taught middle school journalism for several years before he found a job where his two passions collided: golf and mentoring. In 1998, he moved to Atlanta to teach golf to youth from the East Lake neighborhood, a community then known as “Little Vietnam.”

Through nine years as the executive director of the East Lake Junior Golf Academy, Puryear made a promise to every kid. If they stuck with him, they would go to college.

That dream didn’t always seem reachable. One of his kids had to duck for cover when his family’s apartment was shot up, he says. Two of his golfers were falsely accused of robbery and arrested after leaving the 18th green. A few took up gambling on the course so they could make money to buy food. Puryear raided his closet to give away shoes and clothes. And some nights, dinner at the Puryears, a family of five, was dinner for ten so his golfers could have something to eat.

Through it all, he kept his promise. From his class of 2007 students, he says six signed to play collegiate golf, and in total Puryear estimates more than 50 kids went on to college.

“The world needs that. The world needs a true picture on what’s out there,” he says of Black kids excelling in golf. “[And] these young people need to see that they have the ability, they can dream, they can be anything they want to be. If this is the game they chose to play, they can play.”

When he heard it, he laughed.

It was 2008. After serving as an assistant coach on Stanford’s national championship-winning team, Puryear was hired as the head golf coach at Michigan State, becoming the first African-American coach of a Power Five conference team.

But he wasn’t always welcome in big-time college golf.

“I got called the ‘n-word’ a couple times,” Puryear says.

He’s open about his personal life, including his divorce, which he attributes to entanglement with his golf “ministry.” He’s more hesitant to discuss incidents of racism he faced while coaching at “PWIs,” or “predominantly White institutions.” But at Michigan State, he says, he overheard a collegiate golfer call him the “n-word,” and chuckled at the young man’s misguided audacity.

“I’ll just leave it at that,” Puryear says.

After four years at Michigan State and one Big Ten conference title, Puryear moved back to North Carolina to be closer to family. He led the Queens University of Charlotte program for several seasons, then left to pursue his own business, Pure Swing Golf Solutions.

When Howard received Curry’s gift — neither he nor the school has revealed the exact amount — it had the means to launch its golf teams. More than 50 years ago, Howard had a successful program that went undefeated in 1968 and won two conference championships in the 1970s, a school official said. But the program did not compete in Division I golf and disbanded after winning those conference trophies.

Kery Davis, the school’s Director of Athletics, envisioned Howard not only starting anew for its inaugural 2021 season but building a program that could compete with PWIs. He hired Puryear.

“He saw it,” Davis says of sharing big goals with Puryear. “I want coaches who have the same vision.”

Puryear started constructing the program last year. He didn’t have much time to find his building blocks, so he went searching. He signed sophomore Edrine Okong, who he first met while teaching a golf clinic in Uganda. And one day after Hampton University discontinued its golf program, Puryear contacted junior transfer Everett “EJ” Whiten Jr.

Then, he got a tip from a fraternity brother about Gregory Odom, Jr., who had entered the transfer portal after growing discontent with University of Memphis. Puryear started calling every week. Odom had never considered attending an HBCU since only 24 schools have a golf team, according to Black Golf Directory.

“I really wasn’t digging it at first,” Odom says. “I really just thought it was a false hope.”

At Memphis, Odom was the only Black golfer on the team. In 2020, the NCAA recorded 2,903 athletes in Division 1 men’s golf. Only 2 percent (59 golfers) were Black. Odom felt like an outsider with the way he dressed and the music he wanted to listen to. He was tired of constantly toning himself down to fit in. Eventually, he says, he recognized Howard and Puryear as his best fit.

“You can’t communicate the same the way the other teammates can with the coach,” Odom says of his time at his former school. “That’s what I love about Sam. … He is one of us.”

Now the man at Woodmont is walking toward Puryear. The coach, a guest, venerates the stranger, who’s presumably a member, saying how he’d like to teach Howard golfers as much about the game that the older man has already forgotten.

“They leave Sunday for Williamsburg,” Puryear tells him.

Yes, to play. It’s the Golden Horseshoe Intercollegiate, the program’s first tournament. The team will finish 13th out 16 teams, edging out Georgetown. Odom will place in the top 20. Puryear will drive the 15-person practice van, a first in 14 years. He’ll also do the fundraising, and he’ll keep calling until he finds a more permanent practice home, which he’ll eventually find at a different country club, Woodmore, in Prince George’s County. And he’ll turn his energy to the women’s program, which will start play in the fall.

“I feel like I’m putting Legos together. I’m literally building from the floor up,” he says. “I don’t sleep a lot.”

For now, though, he’s still in Rockville, with the man who can’t believe that Howard has a golf team.

No, Division I, Puyrear says.

“One?!” the man says, and then keeps talking, as Puryear listens politely.

“The fact that you play is good,” he tells Puryear. “And there’s no pressure. If you lose, you lose.”

The white-haired man stays a bit longer, watching bunker shots roll to a stop a few away from the cup. Puryear’s gaze stays on his golfers.

“That’s almost every time we go out,” Whiten Jr. says later. “It happens almost every time. When we go to these places … people want to take pictures and videos of us and it’s kinda — it’s kind of sad, but I’m getting used to it.”

The man says goodbye. Puryear thanks him for coming over, then returns to silently, peacefully, watching his team.

“That guy came up in essence trying to inquire or investigate and we gave him something positive to think about. He walked away, and we gained a new fan,” Puryear says later. “I love it. I love converting people.”