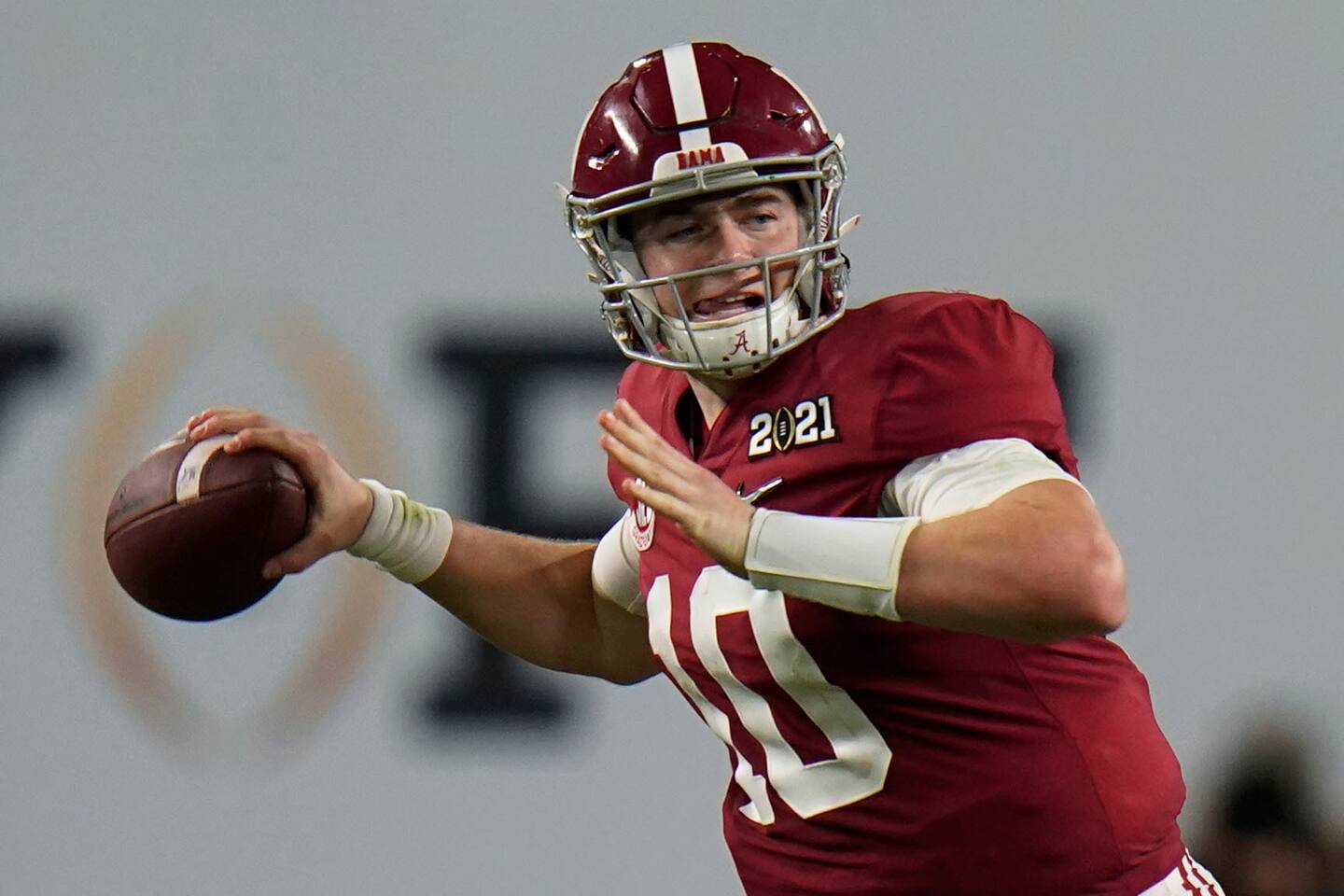 Are the 49ers really going to take Alabama quarterback Mac Jones with the No. 3 pick?

The more you hear out of the Bay Area, the more it sounds like the 49ers favor Alabama’s Mac Jones over North Dakota State’s Trey Lance or Ohio State’s Justin Fields. It’s a surprise in some ways, including the fact that Jones is the least athletic of the five quarterbacks expected to go in the first round.

But Jones checks a lot of boxes for what Coach Kyle Shanahan likes in a quarterback. Jones is smart. He’s accurate. Shanahan likes quarterbacks who know what to do in down-and-distance situations, and that’s Jones’s strength.

Last year, Shanahan expressed his admiration for the way the Kansas City Chiefs developed Patrick Mahomes for a year behind then-starter Alex Smith in 2017. That’s why Lance, who is more of a developmental prospect but with very impressive physical gifts, would make sense as the choice. But San Francisco also could have Jones develop for a year behind Jimmy Garoppolo. The only way Garoppolo won’t be a 49er is if a team offers a first-round pick for him — even for a potentially interested team like the New England Patriots, that’s a steep cost.

Will a quarterback be drafted with the fourth pick?

Clemson QB Trevor Lawrence is a lock to go to the Jacksonville Jaguars with the first overall selection, and the New York Jets’ trade this week of Sam Darnold to the Carolina Panthers ensures that it will draft a quarterback at No. 2. It appears that will be Brigham Young’s Zach Wilson.

If the 49ers take Jones, then the draft’s intrigue will begin with the Atlanta Falcons with the fourth overall pick. They could take Fields or Lance, but the problem with drafting a quarterback is that financially they are locked in to Matt Ryan for the next two years. If they opt for a position player, Oregon offensive tackle Penei Sewell or Florida tight end Kyle Pitts would make sense, but could team owner Arthur Blank get involved and push for Fields?

Teams interested in Fields or Lance could trade up to draft one with the fourth pick, but at this point it seems more likely Atlanta will stay put.

Where will Fields and Lance end up?

The Detroit Lions could take one of the remaining QBs at No. 7 overall. The same is true for the Denver Broncos, and both teams are candidates to trade up, although the Broncos are looking for more of a veteran quarterback to challenge Drew Lock. Don’t count out the Patriots trading up from the 15th pick to get one of the two remaining quarterbacks, either.

How many defensive players will be drafted in the first 12 picks?

Without question, this draft will be dominated early by offensive selections. Normally, the split between offense and defense is closer to 50-50, but that won’t be the case this year. There might be only one safety, one defensive tackle, three or four edge rushers, two or three linebackers and four cornerbacks with first-round grades.

Combine that with the fact that there are top prospects at premium positions like quarterback, wide receiver and offensive tackle, and there could be as few as two defensive players taken in the first 12 picks.

Will there be more trades than normal early in the draft?

Because of how many good offensive players are in this draft, teams might be more willing to trade down to get more picks. Take offensive tackle as an example. Sewell is clearly the best, but there are several good players in the next tier in Rashawn Slater from Northwestern, Alijah Vera-Tucker from USC and Christian Darrisaw from Virginia Tech.

Pitts, who might be the best pass-catcher in the entire draft, and LSU wide receiver Ja’Marr Chase should go in the top six, but teams looking to draft receivers might move down knowing good receivers could drop out of the first round because of the other players available. It’s a good, deep draft for wideouts.

Will there be more trades than normal late in the draft, too?

Expect more teams to try to trade out of this year’s draft to get choices for next year. That should start in the fourth round, if not sooner. This is an unusual draft. There was no scouting combine. General managers and scouts could only go to college workouts to see prospects, with no workouts at team facilities. Many college seasons were shortened, and as many as seven players who opted out of last season because of the pandemic could go in the first round.

Given the uncertainty, many GMs could decide they’d rather have more picks next year than this year.

What teams are positioned to do well this draft?

Which direction will the Panthers move in after trading for Darnold?

Had they not traded for Darnold, they probably would have drafted a quarterback. (Their pursuit of Deshaun Watson in a trade appears to be on hold for now.) While drafting a passer is still an outside possibility, it seems more likely the Panthers will look at an offensive lineman, wide receiver or maybe a cornerback. They could also trade back and add more picks, but if they stay at No. 8, they should have some very good players fall to them.