Jamin Davis began last season off the NFL’s radar. In a few weeks, he could be a first-round pick. 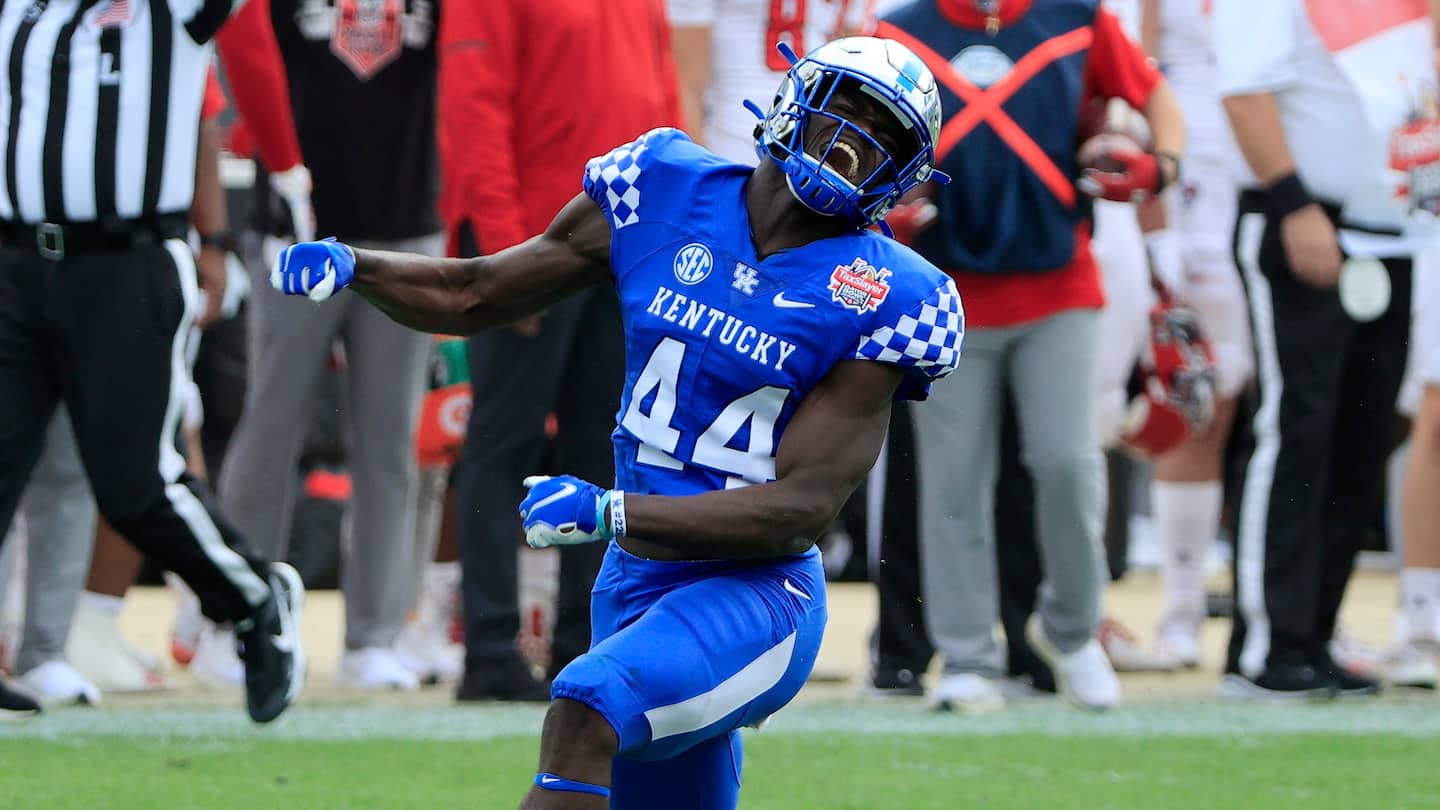 He idolized running back LaDainian Tomlinson, and even though his parents made sure to keep him involved in other activities — baseball, soccer, track — football spoke to him in ways no other sport could.

That secret his parents discovered years ago is one the rest of the nation is beginning to realize. After only one full season as a starting linebacker at Kentucky — and after a limited pre-draft process — Davis has transformed from a relative unknown to a potential first-round pick.

“I mean, I didn’t honestly know who he was during the fall,” said NFL Network’s Daniel Jeremiah. “Nobody had said anything to me about him, and then you’re kind of going through and watching on tape and this guy just jumps off the screen.”

Davis wasn’t even among Kiper’s top 10 linebackers in February.

“I’ve been messing with Mel about it because I told him about Jamin Davis and had him going late in the first round, and then he bumped him up to like [17] overall. I was like, ‘Listen, Mel, you didn’t even know this guy before I told you about him.’ But he obviously did.”

Davis, 22, didn’t receive Associated Press or coaches’ all-Southeastern Conference honors last season, despite totaling 102 tackles (third most in the SEC), three interceptions (one he returned 85 yards for a touchdown), a forced fumble and fumble recovery, and a blocked kick. And he wasn’t in the national discussion of top players early this year, despite a college resume that, while limited to 10 games, now has many believing he can be a coveted three-down linebacker in the NFL.

At 6-foot-4, 234 pounds, Davis is a wall of muscle equipped with rare speed (he ran the 40-yard dash in unofficial times of 4.41 and 4.37 seconds at his pro day), obvious athleticism (42-inch vertical and 11-foot broad jumps) and the ball skills to be a menace in coverage.

“This isn’t some overnight sensation,” said Kentucky Coach Mark Stoops. “… He’s done a lot of work for a lot of years to put himself in this position.”

‘He just wants to hit people’

The Davises moved from Honolulu to Georgia when Davis was only about a year old. James, now a retired army veteran like Tanga, was stationed at Fort Stewart, about an hour south of Savannah, where Jamin got his first taste of the game.

“He always had been skinny all the way up until probably high school,” Tanga Davis said. “When you look back at the pictures, I didn’t realize he was so skinny compared to now.”

Though the dream then was to be like Tomlinson, it wasn’t long before Davis took a liking to a different position. When Davis was around 8, his rec league coach pulled his father aside and asked him to speak to his son. “‘I’m trying to get him the ball,’ ” James recalled the coach saying, “ ‘but he just wants to hit people.’

“He’s a totally different person [on the field].” James continued. “He’s just focused. It’s like David Banner turning into the Hulk — he’s going to get there and he knows what he’s got to do, and he just focuses on completing the mission.”

Davis understood the game at a level few kids his age could. And the advice one of his coaches gave him early on has stuck with him for years. The coach told his team that “you can’t have a million dollar dream without a minimum wage work ethic.” Davis took it to heart.

“From elementary school through middle school, even up to high school, it never left my mind,” he said. “It’s true: You’re going to get out of it whatever you put into it. It was just something that throughout high school I learned, especially being from a smaller area. You can’t have these dreams of playing in the SEC or playing in the NFL if you’re not doing the work to get to that level.”

At Long County High in Ludowici, a town of about 2,600 in southeast Georgia, Davis became a standout receiver and linebacker, compiling 131 tackles as a junior and 126 more as a senior while offering glimpses of what he’d do at Kentucky. After a slow start to his recruitment, Davis committed to Kentucky in part because it was the first program to offer.

But he arrived all of 195 or so pounds and had to bide his time. Kentucky’s linebacking corps was deep and Davis’s first couple of seasons, following a redshirt year, were as a special-teamer and backup linebacker.

“I knew that eventually I was going to get a chance to show what I’m really about and to show everybody who I am as a player,” he said. “The way that it unfolded, it was just crazy.”

Jon Sumrall, the former Kentucky linebacker hired in 2019 to coach the position for the Wildcats, said Davis was the team’s most improved player in the spring that year, but a nagging hamstring injury during the summer hindered his start to the season. In the final stretch of the year, Davis’s production began to match his potential. He recorded at least six tackles in each of the team’s final four games. He also had an interception and a sack.

“That’s really when I was like, ‘All right, it’s about to happen,’ ” said Sumrall, who was recently promoted to Kentucky’s defensive coordinator.

‘Take a bet on myself’

In May, starting “mike” linebacker Chris Oats suffered a stroke and spent months at a rehabilitation facility. Though his condition created opportunity for Davis, it also shook a team that would be tested again. In addition to the challenges created by the coronavirus pandemic, Kentucky assistant coach John Schlarman died in November after a two-year cancer fight.

“It was extremely hard for a lot of us,” Davis said. “We just had to find a way to keep going.”

To honor Oats, a different Kentucky player would wear his No. 22 jersey each week. Davis wore it during the Wildcats’ 24-2 win over Mississippi State, when he recorded 11 tackles and an interception.

“Jamin and Chris and [linebacker Deandre] Square, those three were thick as thieves,” Sumrall said. “ … I think through Chris’s trials and what he’s had going on, it’s maybe centered Jamin and lit even a bigger fire underneath him to make the most of every day and to not take anything for granted and to honor your brother in how you go about your work every day.”

Though Davis entered the 2020 season with only one start at linebacker, he had completed a physical transformation, from that 195-pound teenager years earlier to a 234-pound man. He pushed himself to become more vocal on the field — to be that “general,” like he described Ray Lewis — and often arrived an hour early to Sumrall’s meeting to learn the intricacies of the defense or watch film of opponents.

“I think he felt the sense of urgency to step his game up and take the next step,” Sumrall said. “He went from a guy who did what he had to do to prepare each game and each week and each practice to a guy that was preparing like he was on a mission.”

Among the most notable stops on his mission was Knoxville, Tenn., where Davis returned an interception 85 yards, flipped his way into the end zone, then gave a memorable recounting of the play to reporters afterward.

“I thought I was about to pass out for a second, man. I’m just like, sheesh,” he said. “A pick-six, let me go ahead and get it — might as well just run my balls off. And I made it. Hope my mama’s proud of that one.”

It’s still one of Sumrall’s favorite moments with Davis.

“I got like 50 text messages from UK people who were like, ‘Greatest quote of all time,’ ” he said. “He’s just a very genuine kid. What you see is what you get with him.”

Days after Davis helped seal Kentucky’s Gator Bowl win over N.C. State with an interception, he declared for the draft.

“That was one of the hardest decisions I ever made in my life,” he said. “In the back of my mind, I was thinking that I should just take a bet on myself.”

For the first three months of the year, Davis trained with the agency Athletes First’s draft group at ProActive Sports Performance in Southern California. His regimented schedule of workouts and recovery sessions were packed around multiple Zoom calls with NFL teams.

As NFL interest in Davis has increased, his name has shot up draft rankings and his play has drawn praise by analysts.

“I love watching him because he reads the play so quickly, especially on run plays. He just shoots that gap,” McShay said. “He sees it so fast.”

But the new gold standard for inside linebacker is the player who can not just chase down backs in the running game but also cover tight ends and occasionally wide receivers in the passing game. Davis was one of six linebackers last year — including the nation’s top defensive player, Zaven Collins — to have at least three picks, and now many analysts rank Davis as the No. 2 inside backer behind Parsons.

“To me, his ability to defend the run and then to be able to cover, he’s a complete guy,” McShay said. “And you saw the pro day workout — his numbers are outstanding. … I can’t say enough good things about him.”

Yet Davis’s intrigue goes beyond his physical skill. He is an avid NASCAR fan, and aspires to be a lawyer when football ends because he knows it eventually will. He’s a self-described introvert with football as his focus, but he’d stay late after team dinners to play with Sumrall’s kids and his neighbor’s kids.

Sumrall said he knows that Davis’s on-field talents are special, but his character is even more so. And perhaps, finally, the NFL is discovering what he — and Davis’s parents — saw long ago.

“Honestly,” Davis said, “I guess people are starting to wake up a little bit.”