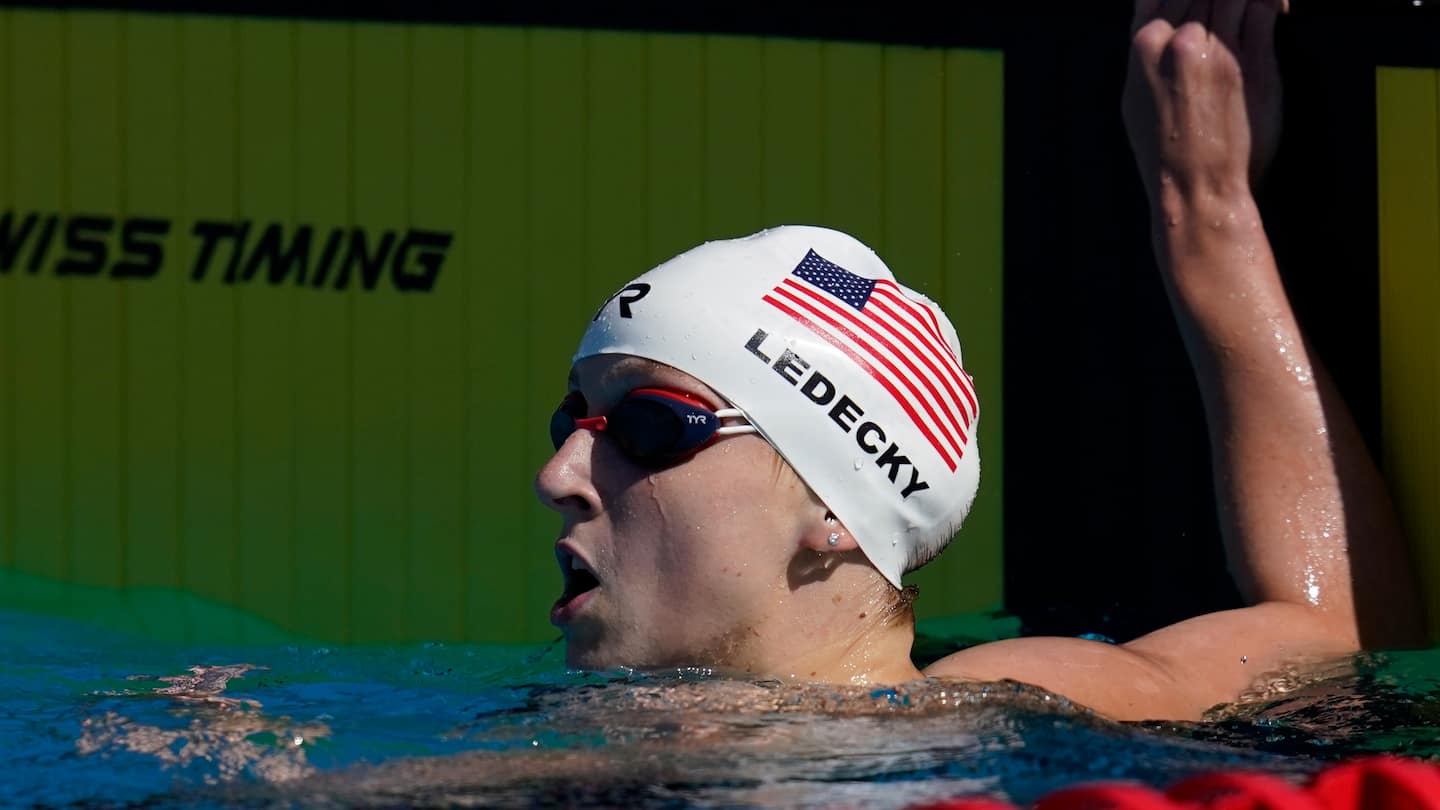 At the 2018 Pan Pacific championships, she turned in a third-place finish. At the world championships a year later in South Korea, Ledecky withdrew from the 200 because of illness. As other swimmers have gotten faster at the distance, it was unclear whether Ledecky’s best times were behind her.

Ledecky won in 1:54.40, the world’s best time this year. It was also Ledecky’s fastest 200 race since her 2016 Olympic title, when she finished in 1:53.73. Perhaps just as notable, her time Friday was nearly a half-second faster than what she posted at the 2016 U.S. Olympic trials, setting a high bar for the next few months of racing.

“It was a good, confidence-building swim,” she said. “It’s right where I felt like I should be and where I feel like I am in training. So I was happy with it.”

The Mission Viejo meet serves as a dress rehearsal of sorts for Tokyo. It features the same inverted schedule with swimmers waking up and racing finals in the mornings, rather than in the evenings when medal races are typically held.

“Each morning swim is a little bit of a test,” Ledecky said. “You want to be faster than you were the night before. So I passed the first test.”

Ledecky, prepping for her third Olympics, skipped the 800-meter race this week but is still expected to compete in the 400-meter final Saturday and in the 1,500 on Sunday. (Ledecky is also entered in Sunday’s 100, which is more of a tuneup event.) If all goes as planned, she’ll be chasing five medals in Tokyo, which would include four individual races and the 4×200 relay.

Her race Friday — her fastest 200 on American soil — featured her trademark blend of speed and consistency. She chased down Abbey Weitzeil after the first turn and had the lead by the 100-meter mark. She was a full body length ahead of the field at the final turn and kicked her way to a 29.06-second split over the final 50 meters. Ledecky finished more than 3½ seconds ahead of second-place Allison Schmitt, the U.S. record holder in the 200 and the 2012 Olympic gold medalist.

Ledecky, 24, knew she was still capable of such a time, but with the competition schedule largely scuttled because of the coronavirus pandemic — and the Tokyo Games postponed a full year — she hadn’t had many opportunities to show everyone else.

“I like to be 1:54 in-season before the international meets. It’s always good to kind of feel that out. I didn’t really have that expectation, but [Thursday’s preliminary] swim was a pretty easy feeling — 1:55, which is great,” she said. “So I knew I could take a shot at 54. I was happy to get that low.”

In the four-plus years since the Rio Games, Ledecky has remained dominant in the longer races, especially the 800 and 1,500. She holds the world record at those distances, as well as in the 400. But in the 200, she has seen some rivals gain ground.

Canada’s Taylor Ruck and Japan’s Rikako Ikee took first and second at the Pan Pacs in 2018, and Federica Pellegrini, the world record holder from Italy, won the race at the 2019 world championships. Ariarne Titmus and Emma McKeon, both of Australia, and Sweden’s Sarah Sjostrom also had bested Ledecky’s best post-Rio 200 time.

In other races Friday, Lilly King easily won the 100-meter breaststroke in 1:05.70, which was 0.68 faster than second-place Lydia Jacoby.

Caeleb Dressel injected a bit of intrigue into his Tokyo program and apparently hasn’t ruled out chasing eight Olympic medals this summer. He won the 100 butterfly (51.61) and 200 freestyle (1:47.57). The 200 was not expected to be in his Tokyo plans, but Dressel said he would tackle it at trials, which could give him a shot at the 4×200 relay this summer and possibly the individual event, too.

“I would not want to give up an opportunity to have another swim at the Olympics. … I don’t want to say I’m going to promise anything,” he said, noting he hasn’t cemented his plans. “We’re going to get the feet wet at trials.”