Workers at Amazon warehouse in Alabama reject unionization, a major win for the e-commerce giant 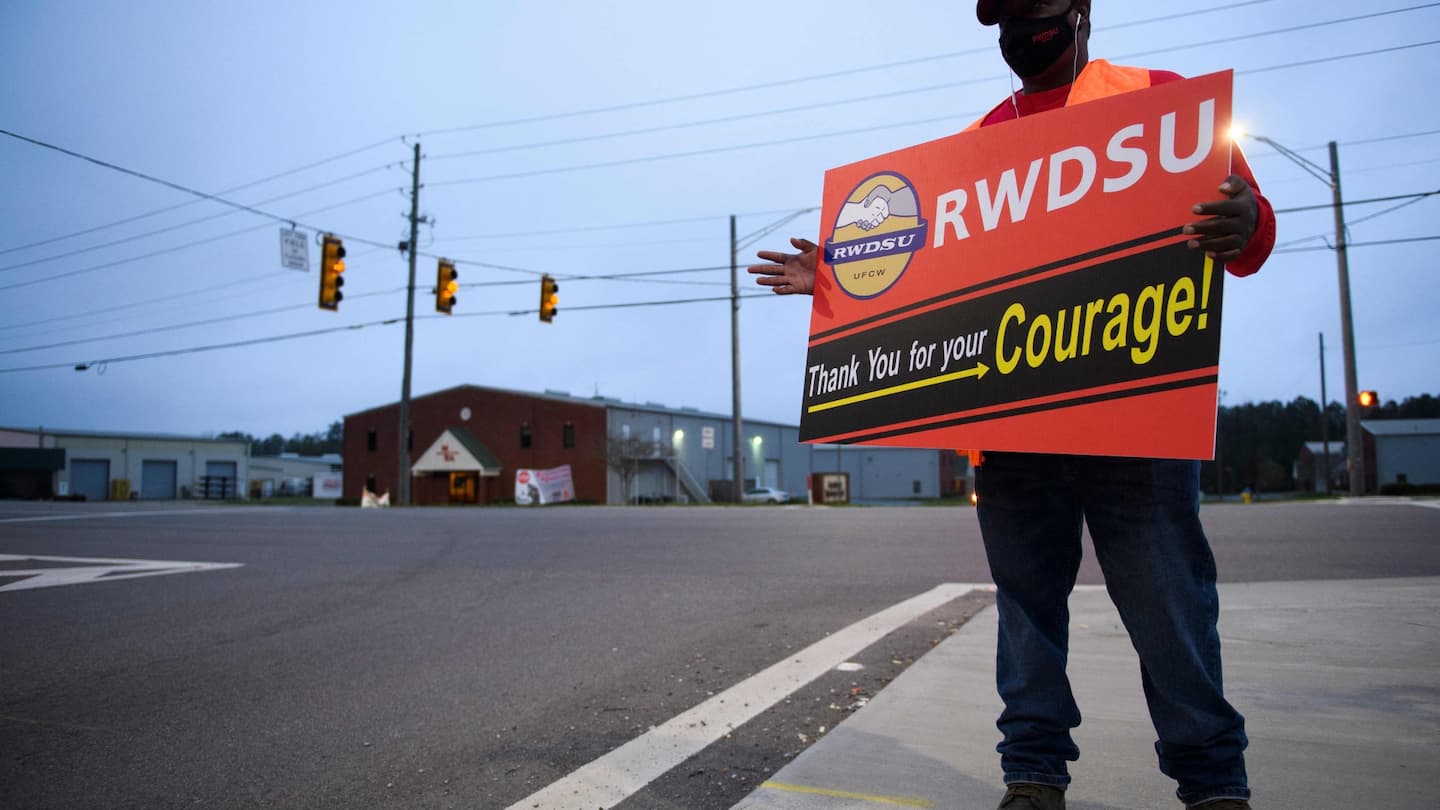 A union victory could have triggered a wave of organizing drives at other Amazon warehouses, potentially giving workers more flexibility to demand concessions from the company on things such as breaks, safety and the pace of work. But the loss throws cold water on that, and allows Amazon to add and cut staff at its warehouses as it wants.

The result is also a setback for high-profile supporters including Sen. Bernie Sanders (I-Vt.) and President Biden, who tweeted a video saying workers should be able to make their decision in union elections without pressure from their employer, without mentioning Amazon by name.

“The history of struggle is that you don’t always win the first time out,” Sanders said in an interview with The Washington Post. “You may have to come back and do it again.”

And that’s just what labor proponents promised to do.

“We’re not going anywhere,” Richard Trumka, president of the AFL-CIO, said during a union news conference after the vote count. “Whether Jeff Bezos likes it or not, this organizing drive is going to open the floodgates to more collective action.”

The union that sought to represent the Bessemer workers, the Retail Warehouse and Department Store Union, said it will challenge the results, claiming Amazon used tactics to mislead and intimidate workers that were illegal.

“They lied and tried to game the system,“ RWDSU President Stuart Appelbaum said.

“These fabrications are tiresome but expected,” Herdener said in a statement. “You’re going to hear a lot of untruths from the union now because they have to explain the lopsided result and their answer can’t be Amazon pays more than $15 an hour, offers health care from day one, up to 20 weeks of parental leave, and a safe, clean work environment in state-of-the-art fulfillment centers.”

The unionization effort in Bessemer quickly mushroomed over the past few months into one of the most closely watched labor battles in recent history after workers filed their notice to hold a unionization vote last November. In the following months, Amazon barraged the 5,805 workers eligible to vote with text messages and fliers posted on doors inside bathroom stalls.

Amazon set up an anti-union website — the now defunct DoItWithoutDues.com — to discourage workers from joining the union drive. And before the voting period, it held mandatory meetings for workers on company time, called captive-audience sessions, to show videos and run through PowerPoint presentations that disparage unionization.

Meanwhile, the union stationed organizers outside the warehouse to answer questions and hand out leaflets to workers as their shifts ended. It held rallies in Bessemer with politicians such as Sanders and actors including Danny Glover to stoke enthusiasm for the drive.

Votes tallied Friday against unionization totaled 1,798 of the more than 3,000 total votes cast, while 738 voted for the union. The margin of victory is larger than the 505 challenged ballots, which would have been counted only if they could have determined the outcome. The labor board voided 76 ballots for a variety of reasons.

The union drive inspired workers at other Amazon facilities to consider their own organizing efforts. More than 1,000 workers have contacted the RWDSU to find out what it might take to launch campaigns at their facilities. The International Brotherhood of Teamsters recently approached 400 to 500 workers at Amazon facilities in Iowa to organize.

Organizers for the GMB Union in the United Kingdom, too, have been keeping an eye on Bessemer as it targets two warehouses there for possible organizing drives.

National Labor Relations Board rules give the union and the company five business days to file objections contesting the conduct or results of the election. The RWDSU plans to file unfair labor practices claims that, if successful, could lead the labor board to toss out the election results. If the board chose to hear the union’s claims, it will need to schedule hearings for that.

It’s unclear whether the union will succeed in winning a challenge. If it did, the entire election process could start again. The RWDSU could also pursue legal challenges in court.

The union has complained about the mailbox, arguing it could lead workers to think Amazon has some role in collecting and counting ballots, potentially influencing their votes.

The Post reported Thursday on emails, obtained by the union through Freedom of Information Act requests, that show Amazon pressing the Postal Service to install a mailbox urgently just as the seven-week mail-in balloting began.

The union also complained about a financial offer Amazon made to lure unhappy workers to quit, arguing that the company provided an improper incentive to weed out pro-union workers.

Amazon has said the mailbox provides a convenient way for workers to vote, and the pay-to-quit offer is extended annually to warehouse workers across the country.

“It’s easy to predict the union will say that Amazon won this election because we intimidated employees, but that’s not true,” Amazon said in a blog post. “Our employees heard far more anti-Amazon messages from the union, policymakers, and media outlets than they heard from us. And Amazon didn’t win — our employees made the choice to vote against joining a union.”

Throughout the union drive, the company noted that its Bessemer workers earn a starting pay of $15.30 an hour, well above the federal minimum wage of $7.25 an hour. (Alabama has no state minimum-wage law.) And the company added that pay, along with health-care, vision and dental benefits and a retirement plan, offer employees more than comparable jobs provide.

Amazon’s opposition to unionization, though, had more to do with concerns over potential workplace rules that could have limited its ability to rapidly hire and cut workers to meet shopping demands that spike and recede throughout the year, former company executives have told The Washington Post.

“It’s really, really hard to win an organizing drive,” Givan said. “The employer has almost unlimited resources and the ability to bombard workers with messages of fear and uncertainty.”

“Amazon is not perfect, there are flaws, but we are committed to correcting those flaws,” Stokes said. “We just feel like we can do it without a union. Why pay a union to do something we can do ourselves?”

The election process also evolved into a reflection of the times. Rather than voting in person at ballot boxes, as is typical of union balloting, workers voted by mail over a seven-week period, a decision by the NLRB to protect Amazon workers and its staff from contracting the coronavirus. Although some workers supported unionization over concerns about a brutal pace of work, the RWDSU also framed the fight around issues of respect and dignity, saying the battle is as much a civil rights struggle as a labor one.

While many of Amazon’s European warehouse workers are organized, the company has faced only one other union vote in the United States. In 2014, a small group of equipment maintenance and repair technicians at its warehouse in Middletown, Del., ultimately voted against forming a union, following a drive led by the International Association of Machinists and Aerospace Workers.

The union’s Appelbaum expressed no regret for the campaign, even with the lopsided vote.

“I think the timing of the election was right,” Appelbaum said. “I think there’s a moment in American life right now that this campaign captured. What we have seen is the revulsion to the extraordinary inequality in our society personified by the staggering personal wealth of Jeff Bezos.”

A pro-union worker at the warehouse, Emmit Ashford, said at the union news conference that the fight against Amazon will continue.

“This experience has bonded us,” Ashford said. “Our time will come again.”