Can men’s college gymnastics be saved? Minnesota is trying, even on its way out. 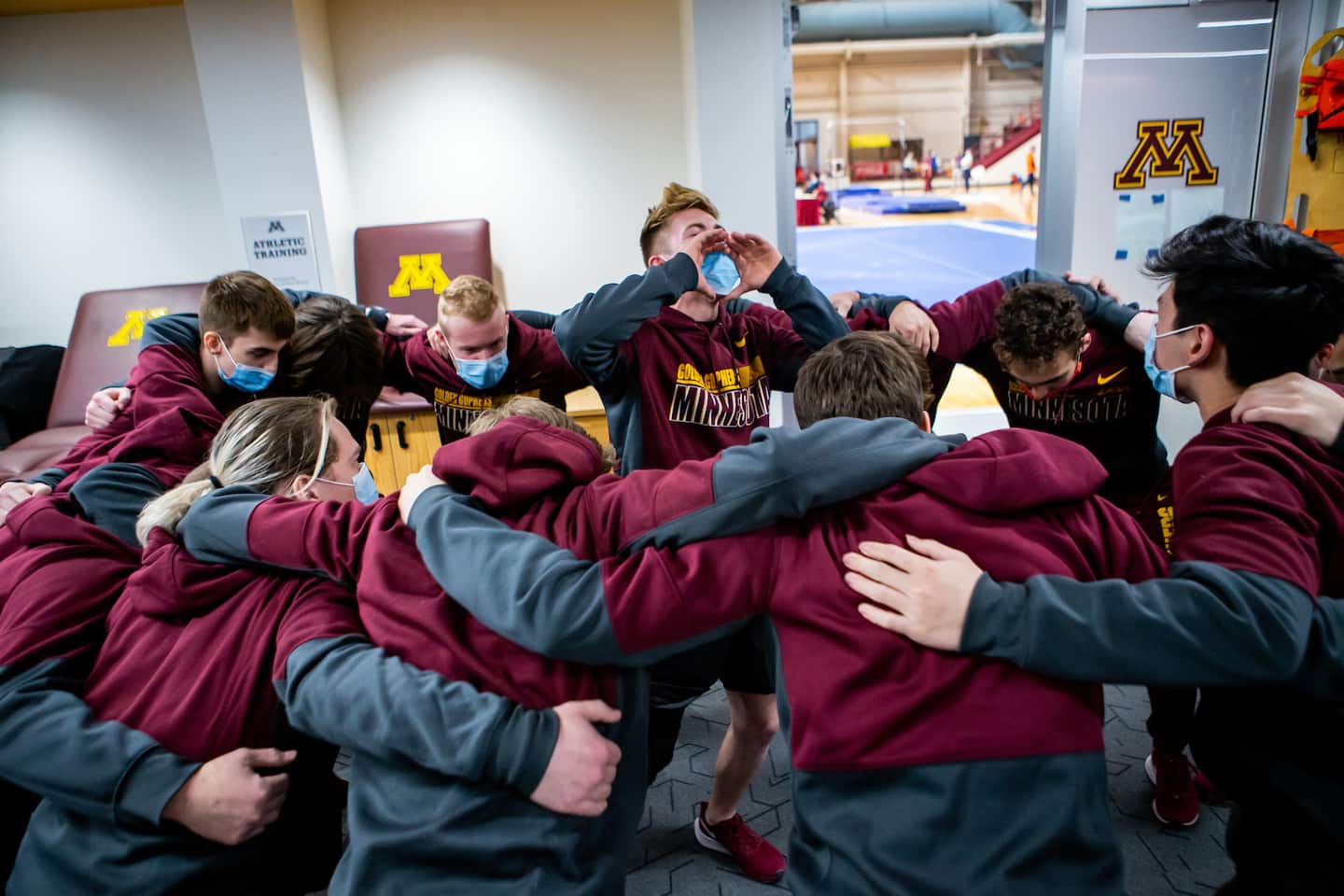 But rather than reinvest in the team — a storied program that has won 21 Big Ten titles, produced two NCAA all-around champions, and boasts a U.S. Olympic prospect in senior Shane Wiskus — Minnesota is dropping men’s gymnastics at season’s end.

The decision to cut the program after 118 years, along with men’s tennis and men’s indoor track and field, was made last fall, purportedly to address what Athletic Director Mark Coyle said was a projected $45 million to $65 million budget deficit caused by the coronavirus pandemic and concerns about complying with Title IX. The Gophers’ final meet comes this weekend at Maturi Pavilion in Minneapolis, where they will host and compete in the 2021 NCAA men’s gymnastics championships, the pinnacle of college gymnastics, representing a university that has deemed them expendable.

“Honestly, I couldn’t care less if we stayed in that crappy gym at Cooke Hall for the next 10, 15 years — as long as we had a program,” said Wiskus, the team’s captain and standout, and a Minnesota native who never considered enrolling elsewhere. “The frustrating part is to know so blatantly that your nonrevenue sport is not valued. It just felt so disrespectful to diminish the hard work we’ve done to represent our school to the best of our ability.”

Minnesota’s decision — combined with the University of Iowa’s plan to drop men’s gymnastics, along with two other sports — is the latest blow to the dwindling ranks of Division I programs, leaving just five Big Ten schools with men’s gymnastics teams and 12 in the nation. And it’s part of a larger pattern at Division I colleges and universities across the country, where “nonrevenue sports” are being dropped in the name of fiscal responsibility

More than 75 Division I teams have been cut since the pandemic crimped revenue streams, according to the Business of College Sports, at powerhouse state schools, Ivies and even at Stanford, long hailed as the model of broad-based sports offerings. The escalating trend raises existential questions on both the front and back end of college athletics: How can sports such as wrestling, rowing, track and field and swimming and diving attract youngsters if the dream of competing in college and earning a scholarship disappears? And where will future U.S. Olympians come from, given that college sports, rather than the federal government or private academies, train the majority of U.S. Olympians?

“It’s like we are a species that’s going to its extinction,” said Mike Burns, Minnesota’s longtime men’s gymnastics coach, who hopes to continue the program as a club team next year while pushing for reinstatement.

What’s unfolding at Minnesota is not just a story of heartstrings. It is a story of smokescreens, too, as colleges and universities retreat from funding two dozen or more sports and double down on spending on the teams that generate the most income, chiefly football and men’s basketball.

“What we have seen from most Division I programs is that with the cuts that have been made, any savings will end up right back in coaching salaries and increases for football and men’s basketball,” said Amy Perko, CEO of the Knight Commission, which has called on the NCAA to revise its formula for distributing men’s basketball tournament revenue in ways that increase financial incentives for schools that fund broad-based sports programs.

At Minnesota, cutting men’s gymnastics, which has an annual budget of roughly $750,000, won’t make a dent in the $45 million to $65 million shortfall. Cutting all three men’s sports will pare just $1.6 million from the $130 million athletic department budget.

Moreover, the decision was sandwiched between handsome raises for the football staff — including Coach P.J. Fleck, awarded a seven-year, $33.25 million contract in November 2019 — and last month’s ouster of underperforming men’s basketball coach Richard Pitino despite a buyout cost of $1.7 million, more than the savings of cutting three sports. (The buyout was negated when Pitino was hired by New Mexico.)

His first indication of trouble was new language on the three-year contract extension he was asked to sign in 2019. It included a “program termination clause” that stated the university would not be obligated to pay him the full value of his contract if the NCAA or the university dropped men’s gymnastics.

The fall 2020 semester was just getting started when athletes on four teams got an email announcing a mandatory Zoom call. It was Sept. 10, Wiskus recalls, just 15 minutes before 2:30 p.m. gymnastics practice. That’s when Coyle announced the teams were being dropped at season’s end.

Freshmen had barely gotten their bearings on campus. Upperclassmen were still reeling from the pandemic’s abrupt end to the 2020 season and cancellation of the postseason. This news stung worse; it wasn’t a global contagion scuttling their dreams but their own university.

After absorbing the shock, many of the gymnasts, tennis players and track athletes scrambled to save their sports. They organized petitions and staged a march through campus.

Wiskus, carrying a full 15-hour class load while practicing 20 hours per week, joined thrice-weekly Zoom calls with alumni to discuss strategy and review talking points for the flurry of interview requests that followed. Sophomore Crew Bold also joined the effort and posted links to “Save Gopher Gymnastics” on Instagram, convinced it was possible if they rallied enough donors, signatures and passion.

“My parents were really big, telling me, ‘Don’t just put your head down. Put your head down and charge!’” recalled Bold, 19, a prized recruit as a U.S. national junior team member, who had chosen Minnesota because of Burns’s upbeat approach and the family atmosphere he felt during his campus visit.

In October, the gymnasts streamed into Minnesota’s Alumni Hall for the Board of Regents’ vote on Coyle’s proposed cuts, confident their efforts had earned a reprieve. The vote was 7-5 to eliminate the sports, after outdoor track and field was spared.

The Gophers’ effort felt familiar to Jason Woodnick, USA Gymnastics’ recently named vice president for men’s gymnastics. Nearly 20 years earlier, he had marched on the quad at James Madison University to save the Dukes’ men’s gymnastics team, which had been targeted for elimination. Supporters won a reprieve, and Woodnick completed his college athletic career. But in 2007 men’s gymnastics was among 10 of 28 sports the school dropped.

“The men’s [college] programs are pretty much the pipeline for our national team,” Woodnick said. “Our world and Olympic teams have come from two places: the Olympic Training Center or NCAA programs, or a combination of the two. You’ve got all these junior guys and young college guys looking at the 2024 and 2028 Olympics, and they want to go to college and do elite level gymnastics there.”

In what Woodnick calls a “Hail Mary” move, USA Gymnastics in January hired former Drake athletic director Sandy Hatfield Clubb, a consultant with the Pictor Group, to develop a strategy for halting further erosion of men’s college gymnastics and ideally growing the sport.

Clubb, who also worked in athletic administration at Arizona State, understands the financial pressures facing Division I athletic directors. But she believes college sports has “lost its way” amid the frenzy to keep pace with runaway spending on football, forgetting its obligation to offer students who play a variety of sports the chance to compete.

Cutting sports in response to covid’s hardships, she feels, is “a permanent solution to a temporary problem.” Moreover, the financial saving is often nominal, especially for athletic departments with $100 million-plus budgets. “In the big scope of things,” Clubb said, “it’s kind of like throwing deck chairs off the Queen Mary.”

With help from Nebraska assistant gymnastics coach John Robinson, Clubb has devised a sales pitch for adding men’s gymnastics that’s tailored to athletic directors at smaller colleges across all three NCAA divisions. They’re focusing geographically on colleges in gymnastics hotspots with strong club-based junior programs nearby, such as Texas and southern California.

Instead of being a revenue drain, they say, men’s gymnastics can add revenue at schools trying to grow enrollment. A men’s gymnastics team could add 20 to 28 new students, Clubb notes, of which most would pay tuition because the maximum number of NCAA scholarships for a gymnastics team is 6.3. For schools with 5,000 or fewer students, that could be significant — particularly amid the current trend of declining college enrollment.

“There is a future and there is a reason for men’s gymnastics,” Clubb said.

End of a brotherhood

Morale was the biggest challenge when the Gophers’ final season got underway in January.

Burns, the sort of coach who can read an athlete’s well-being by his body language, frequently uses the metaphor of family, urging his gymnasts to help each other improve and lean on one another in tough times. Now, his family had been dealt a devastating blow. What he tried to provide was leadership and compassion.

So did Wiskus, as the Gophers’ captain.

“Gymnastics wasn’t the priority; the mental health of the individual came first,” Wiskus said. “So, our goal going into the season was, ‘Let’s get through it together. Let’s practice, be together and train as a family.’”

The athletic department’s formal goodbye came at the conclusion of the team’s final regular season home meet, a narrow loss to Illinois on March 22, via a video tribute to 118 years of Gopher men’s gymnastics.

For some Gophers, the NCAA tournament will mark the end of their gymnastics careers. Bold will continue at Michigan, which accepted him as a transfer. Others will stay at Minnesota and hope to continue training on a club team, if Burns can work out such an arrangement, but they won’t be eligible for Big Ten or NCAA competition.

And a group of dogged supporters, led by Minnesota’s most decorated gymnast, three-time Olympian John Roethlisberger, continues to lobby for a reprieve. As Friends of Minnesota Men’s Gymnastics, they sent a letter to the chair of Minnesota’s Board of Regents, university president and athletic director on April 8, proposing reinstatement as a varsity sport under a self-sustaining budget that would slash annual costs to $200,000.

They got a reply this week.

Board chair Ken Powell lauded their proposal but said “wasn’t a solution.” While finances mattered, he wrote, Title IX compelled the university to “pare down” men’s sports. And with so few Division I men’s gymnastics teams left, Minnesota couldn’t justify keeping it.