Gen Z women are breaking into the venture-capital boys club 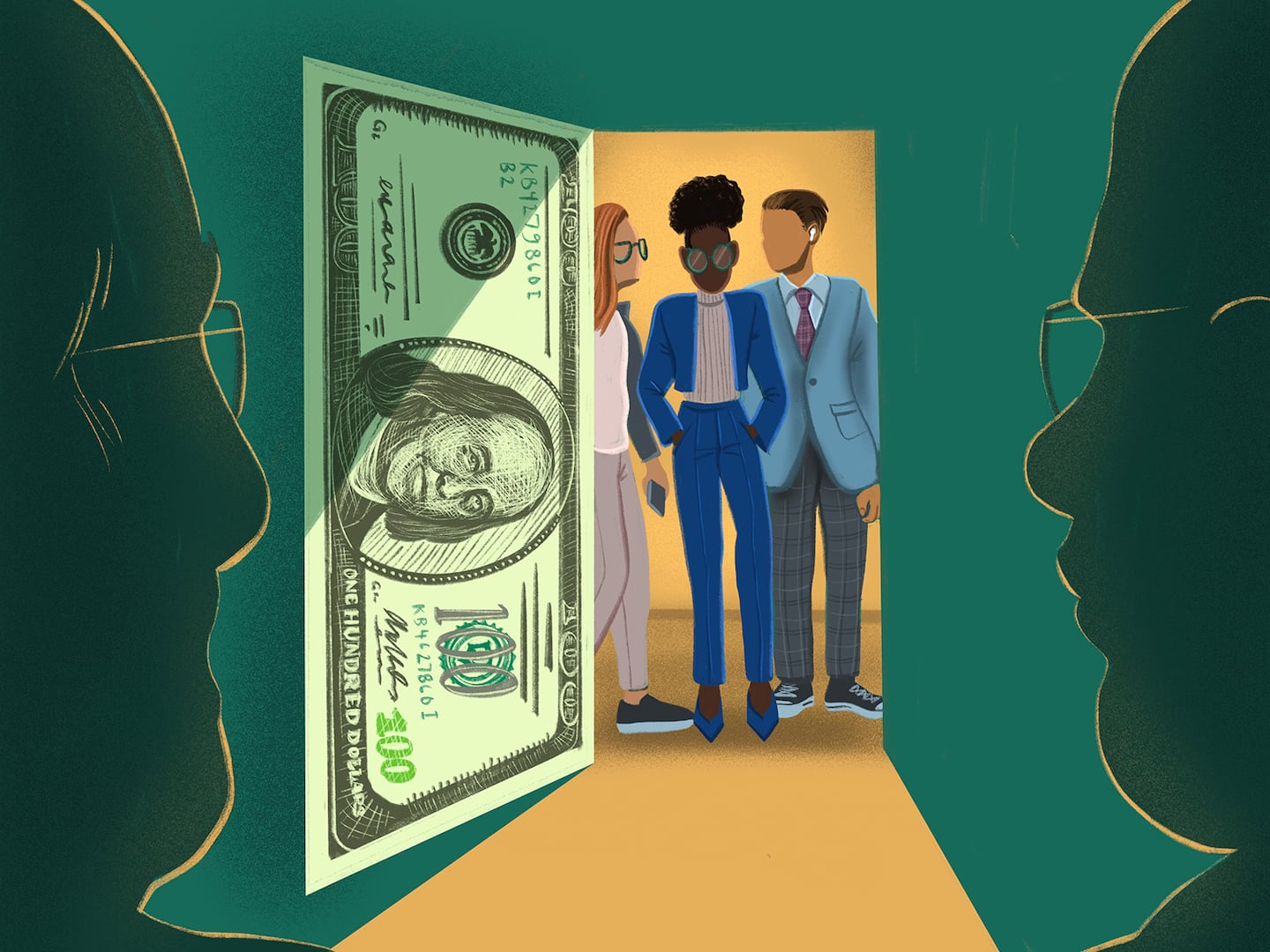 Before watching, Doherty, 22, just assumed venture capital was “a bunch of old dudes sitting in a mahogany library with cigars, saying, ‘I want to invest in that company!’” On screen, however, the female VCs navigated the same kind of challenges she studied during her college entrepreneurship program — figuring out financial architecture, brainstorming strategy and cultivating relationships with start-up founders.

Doherty knew the real-world version of venture capital would be male-dominated. She also knew she could contribute to a change.

Doherty is part of a surge of young women from Generation Z — the post-millennial demographic born between 1997 to 2012 — who have broken into the clubby world of venture capital over the past year or so. In some cases, they made waves by cultivating followings on social media or through online communities they created to help decipher Silicon Valley’s code.

Their newfound visibility signals investors’ interest in funding companies focused on Gen Z consumers and changing the way the venture-capital industry is perceived. The new entrants hope their arrival is also a sign that the VC establishment is open to new perspectives on which ideas deserve funding.

A few have been named investing partners, which comes with check-writing privileges. Some, such as Doherty, are raising their own funds. More often, they have found a foothold as analysts, associates, principals or interns.

In October, Meagan Loyst, a 24-year-old analyst for New York City-based Lerer Hippeau, launched a Slack community called Gen Z VC to share ideas and support with other young investors. It now has more than 7,000 members. Gaby Goldberg, 21, was hired in October as an analyst for Bessemer Venture Partners while finishing up her senior year at Stanford University as a symbolic-systems major.

Some of the women are young millennials. Katherine Wu, 28, a law school graduate working in business development at a cryptocurrency start-up, was hired in August 2019 as Notation Capital’s first principal investor after building an online following for annotated Securities and Exchange Commission complaints, which she posted on her website and shared on Twitter. (Sample notes in the margin: “lol this is sorta savage” and “my man, why would you put this in writing?!”)

Doherty, who majored in mechanical engineering before switching to computer science, went viral for her Twitter threads breaking down venture-capital term sheets, which is she is turning into a children’s book for adults about VC.

For the hierarchical venture-capital industry, which has been slower to diversify than the tech companies it invests in, attention paid to aspirants on its lowest rungs is rare.

Firms are typically tight-lipped about their internal power structure, controlling how employees identify themselves externally. Jobs are rarely advertised publicly and often are filled through networks or word-of-mouth.

Lerer Hippeau partner Eric Hippeau said Loyst is a strategic investor and a leading voice in her community whose perspective has benefited the multigenerational firm. “She has quickly proven to be an invaluable addition to the Lerer Hippeau team as we continue to focus on supporting innovative Gen Z founders and founders of Gen Z brands,” he said.

This flood of new talent also arrives in the middle of an ongoing debate — roiling just outside the industry’s gates — about whether exclusionary practices harm innovation.

Decision-makers at venture-capital firms with more than $25 million in assets under management are 88 percent male, according to All Raise, a group promoting female investors. In 2019, 52 women became partners or general partners at VC firms for the first time, out of 123 investors total, an industry record, according to All Raise. But only one Black woman and one Latina woman were named partner. Forty percent of venture investors at top firms attended just two schools, Stanford or Harvard, according to a 2018 analysis of 1,500 investors by venture capitalist Richard Kerby.

Those demographics influence the types of start-up founders that receive funding. In 2020, venture capitalists invested roughly $150 billion in U.S. start-ups, but only 0.67 percent went to Black founders, according to Crunchbase, a data company. Crunchbase also reported that the percentage of venture dollars going to female-only founders dropped to 2.3 percent in 2020, down from 2.8 percent in 2019.

Established investors say they have been eager to elevate Gen Z voices, for fear of missing out on the next phase of tech — as predicted by the first generation of digital natives — particularly at firms that invest in consumer-facing start-ups. They say they are responding to start-up founders who wonder why the industry looks the same as it did 10 or 20 years ago. They also feel pressure to prepare for increased uncertainty and to differentiate themselves.

“You look more like the world and therefore can evaluate real-world problems and attract great people to take your money,” said Andy Weissman, a partner with Union Square Ventures, which has backed Twitter and Coinbase. “You don’t look like an older version or a niche version of the world.”

The industry has long resisted external pressure to evolve. VC firms were called out for their lack of female partners in 2015 after investor Ellen Pao’s high-profile gender discrimination lawsuit, which she lost, against her former employer Kleiner Perkins, the A-list firm known for backing Google and Amazon, and again in 2017 after the #MeToo movement exposed sexual harassment against female founders by male investors. Last summer, during the protests after the murder of George Floyd, firms responded to the demand to hire Black partners with ancillary funds or offers for mentorship and training, something Black investors and founders called “diversity theater.”

Skeptics point out that the difference between millennials and Gen Z is arbitrary and could be used as another exclusionary tactic. They worry that power may not really be changing hands and that this generation may too soon hit the glass ceiling.

The life cycle of venture funds, which typically make bets over five to 10 years, has kept the venture industry insulated from the normal process of generational transfer, Weissman said. Gen Z investors have approached the job with a mix of reverence and wariness. “They’re into it as a profession. They’re into it as a pursuit of building things. But they’re also skeptical, the way any younger generation is of the older generation,” Weissman said. “I find it to be incredibly refreshing. It’s the normal generational transfer but applied to a profession where that really hasn’t happened at this magnitude or maybe this publicly before.”

Gen Z investors say the coronavirus pandemic has made it easier to be judged by their contributions to the community rather than by whom they know. Bessemer’s Gaby Goldberg turned to Twitter last year after a tip from an investor who said joining the tech conversation there was more valuable than an MBA. Now she has nearly 15,000 followers. She also posts on Medium, which she says helped her land her first job in VC. “It can be very daunting to kind of add to the conversation, but I felt like starting all of that online, they could only judge me for the things I had to say,” she said.

Lerer Hippeau’s Loyst said that since the beginning of the year, partners at VC firms have increasingly asked her to post job listings for analyst, associate and intern roles in her Slack group. “Even if they’re hiring an MBA, they say, ‘It’d be amazing if they’re Gen Z,’” Loyst said.

Loyst did not say a word about being Gen Z when she sent a cold email to a partner at Lerer Hippeau in January 2020. She had been working full time for only four months and later learned the job description called for someone with two or three years of experience.

But when Lerer Hippeau was vetting a rental clothing company focused on Gen Z consumers, the partners asked Loyst for her input. When the firm looked at investing in a TikTok competitor, Loyst and one of her younger sisters downloaded the app and recorded dances together, as part of the firm’s due diligence. (The firm did not invest in either company.) After she launched the Slack group, Loyst — who compared herself to Rachel Berry, the overachieving character from the TV show “Glee” — posted an online form for college students and others to join a private group called Beta Club, to help portfolio companies get feedback from their target demographic.

As an analyst at TVC Capital, a growth equity fund in her hometown of San Diego, Doherty focused on companies serving the creator economy, such as CreatorIQ, a start-up that helps brands manage campaigns with influencers. She said she understood the market as a participant and a consumer. The firm’s “outlook would be a bit more anthropological or academic than mine,” she said.

For her, it was just a natural offshoot of life online. While she was a junior, Doherty and a friend downloaded a Python bot from GitHub and sold it to Instagram photographers to help them get better engagement through niche hashtags and locations. “I was ducking out of classes to answer customer service calls like, ‘Hello, let me get Paige on the phone. … Hi, this is Paige,’” she said. “We had maybe three paying customers, and one of them was my mom.”

Doherty fell into building an angel investing syndicate by accident, after start-up founders approached her because they liked her drive to make investing more accessible. She has deployed about $300,000, raising money from established VCs and people doing this for the first time, which helps get around restrictions around accredited investors.

“As long as you don’t invest your own money but you organize it, you are able to build a track record, which seems like a very viable way forward for a lot more underrepresented folks to get into investing,” Doherty said.

Goldberg said the ability to make change from the inside provided her all the more reason to stay. “There were countless times, even in my short career, that I’ve been the only female square on the Zoom call,” she said.

Former Kleiner Perkins investor Pao, who co-founded the nonprofit Project Include, which promotes diversity and accountability in the tech industry, said the vast difference in experience between Gen Z and established investors makes their presence less threatening, which in turn makes it harder to break down systemic issues. “If you have somebody straight out of school, you can always take their projects from them. That’s what I worry about,” she said. “I hope I’m wrong.”

She noted the pattern she experienced at Kleiner, with women with a great track record of bringing in lucrative deals not getting promoted, because of claims they did not have sufficient operating experience or experience founding a company or taking one public.

Some in the new class of investors are already disillusioned with the idealized version of diversifying venture capital and ready to take aim at structural forces. Wu quit Notation last month after growing to dislike the role of gatekeeper. “It was a rude awakening to understanding that venture capital at the end of the day is a numbers game,” she said.

Wu had gone into it hoping to invest in more women but found that meetings often depended on the partners’ network, a strata that is still overwhelmingly White, male and from the same class. “Perceived authority is really hard to step into,” particularly for people of color, said Wu, who grew up in mainland China and Hong Kong. “Hiring is like a Band-Aid,” she said. “The work doesn’t stop there.”

How to catch up on Metroid, the classic series shunned by Nintendo