SpaceX launches NASA’s Crew-2 to orbit, its third human spaceflight in less than a year 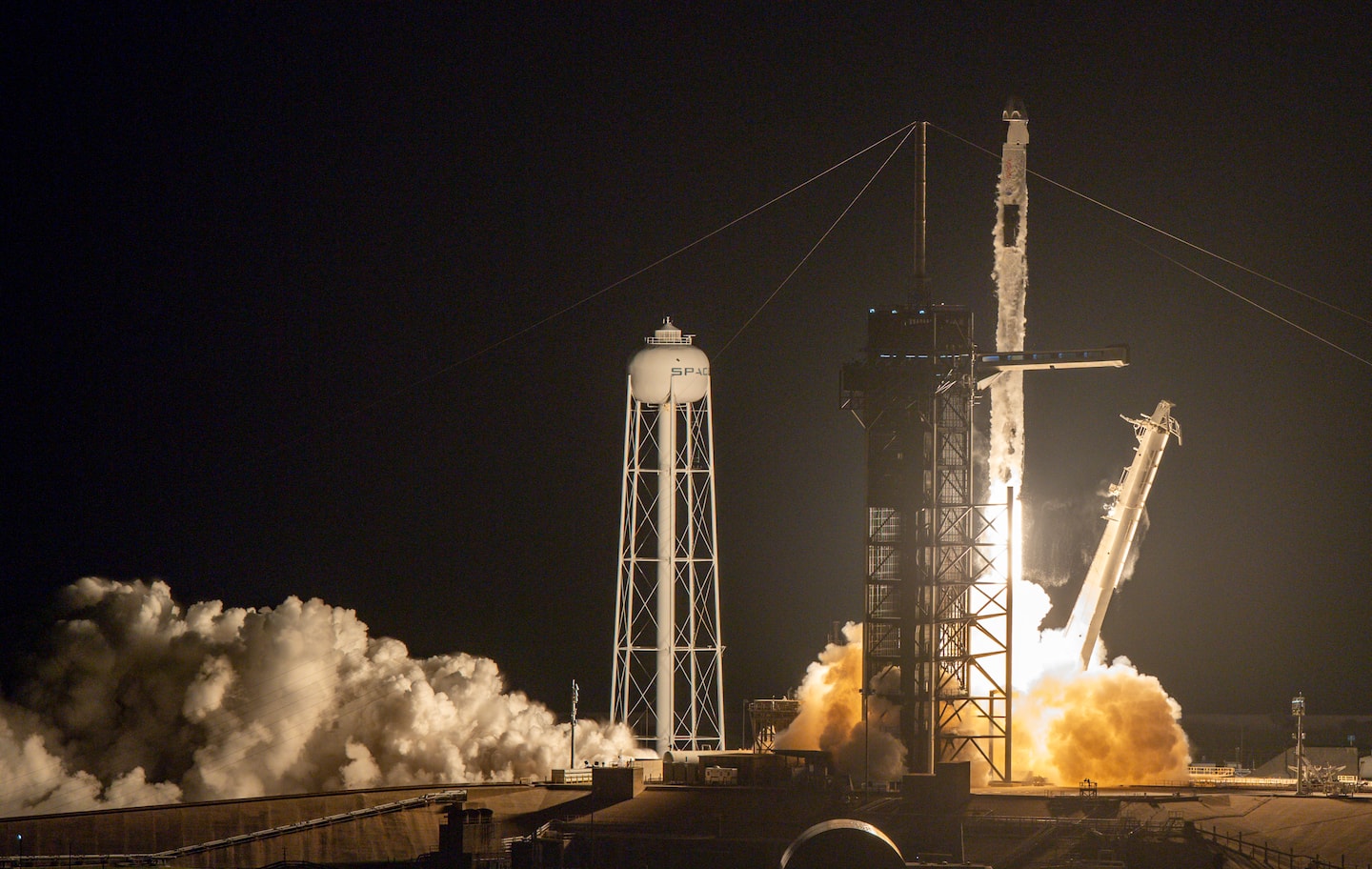 Flying inside SpaceX’s autonomous Dragon spacecraft was an international quartet known as Crew-2: NASA astronauts Megan McArthur and Shane Kimbrough, as well as Thomas Pesquet of France and Akihiko Hoshide of Japan.

The flight represents another step in SpaceX’s metamorphosis from a fringe start-up born nearly 20 years ago that many, including its founder, Elon Musk, thought was unlikely to succeed to an aerospace juggernaut that is fast becoming one of NASA’s most trusted partners.

In a post-flight news conference, Musk said that now with three launches under SpaceX’s belt, his nervousness has eased a bit — but not much.

“I suppose it does get a little bit easier, but it’s still extremely intense,” he said. “I usually can’t sleep the night before a launch, and that was true the night before this one, so I haven’t had much sleep. But fortunately we have a great team.”

He added that “it’s hard to believe that we’re here doing this, quite frankly. It feels like a dream.”

In a live broadcast from the capsule while flying over South Africa a couple hours into the flight, the crew said the launch was spectacular as it lifted off in darkness but quickly found the rising sun in the east. The rocket’s plume could be seen up and down the Eastern Seaboard, and even in the DC area.

“The ride was really awesome,” McArthur said. “We couldn’t have asked for any better. There may have been some hooting and giggling up here while all that was going on.”

Friday’s flight was the first time NASA has allowed SpaceX to use a previously flown rocket and spacecraft in a human spaceflight, a significant milestone for the company, which Musk founded with the goal of driving down the cost of space exploration.

The Dragon capsule was the same one used in SpaceX’s first human spaceflight mission, a test flight with two NASA astronauts, Bob Behnken and Doug Hurley, that lifted off last May. Behnken and McArthur are married — and during her flight Friday, McArthur was assigned to the same seat her husband occupied last year. “That certainly adds a little something special to the mission,” she said.

Lifting off under an orange tail of fire with a roar that reverberated across the Florida Space Coast, the crew of four is expected to take nearly a full day to reach the space station, with docking scheduled for 5:10 a.m. Saturday. Once there, the astronauts will spend about six months performing science experiments.

About 10 minutes after launch, the first stage returned to Earth and landed on a ship at sea, allowing SpaceX to reuse it for a future mission.

SpaceX has two more astronaut missions planned for this year — the Crew-3 mission to the space station for NASA this fall, and a mission to fly a group of four private astronauts that could come as early as September and become the first all-civilian space mission.

That flight, known as Inspiration4, is being funded by billionaire entrepreneur Jared Isaacman, who has made it a fundraising effort for the St. Jude Children’s Research Hospital. Joining Isaacman, the founder of Shift4 Payments, will be three private citizens: Hayley Arceneaux, a physician assistant at St. Jude who as a child was treated for bone cancer there; Sian Proctor, a scientist who won her seat in a competition by building an online store using Isaacman’s platform; and Chris Sembroski, a Lockheed Martin engineer who was picked at random as part of a hospital fundraising sweepstakes.

The group is scheduled to spend a few days orbiting Earth inside SpaceX’s Dragon capsule.

SpaceX also is planning to launch another crew of private citizens early next year in a mission organized by Axiom Space, a Houston-based company. That group, three billionaires who are paying $55 million each, would be joined by former NASA astronaut Michael López-Alegría, who is now a vice president at Axiom. The crew would spend about a week at the space station before returning to Earth.

The Crew-2 mission initially was set for Thursday, but it was delayed by high winds.

The arrival of Crew-2 at the space station will expand the station’s population to 11, nearly twice the six people that are normally there at a time.

But the astronauts make do. After arriving at the space station in November, NASA astronaut Mike Hopkins also faced tight conditions and knew he’d have to hunt for a place to bunk since sleeping quarters were full. He ended up using the Dragon, which was connected to the station.

The space station will be crowded for only a few days, however, since Hopkins’s group of astronauts, known as Crew-1, is scheduled to return to Earth next week. In February, that group surpassed the record for the most days in space by a crew launched on a U.S. spacecraft, surpassing the 84-day milestone set by the Skylab 4 crew in 1974.

If all goes well, Crew-1 will splash down in the Atlantic Ocean or the Gulf of Mexico shortly after noon on Wednesday, ending a six-month stay on the station.

SpaceX’s monopoly on launching American astronauts from U.S. soil will probably last into next year. Boeing, the other company under contract to fly NASA astronauts to the station, is expecting to do a no-crew test flight of its Starliner capsule in August or September, but a mission with astronauts is not expected before early 2022.

NASA also paid Russia about $80 million a seat to take American astronauts to the space station from a space center in Kazakhstan. But now that SpaceX is flying people, and Boeing could start doing the same next year, the agency plans to swap seats with the Russians.