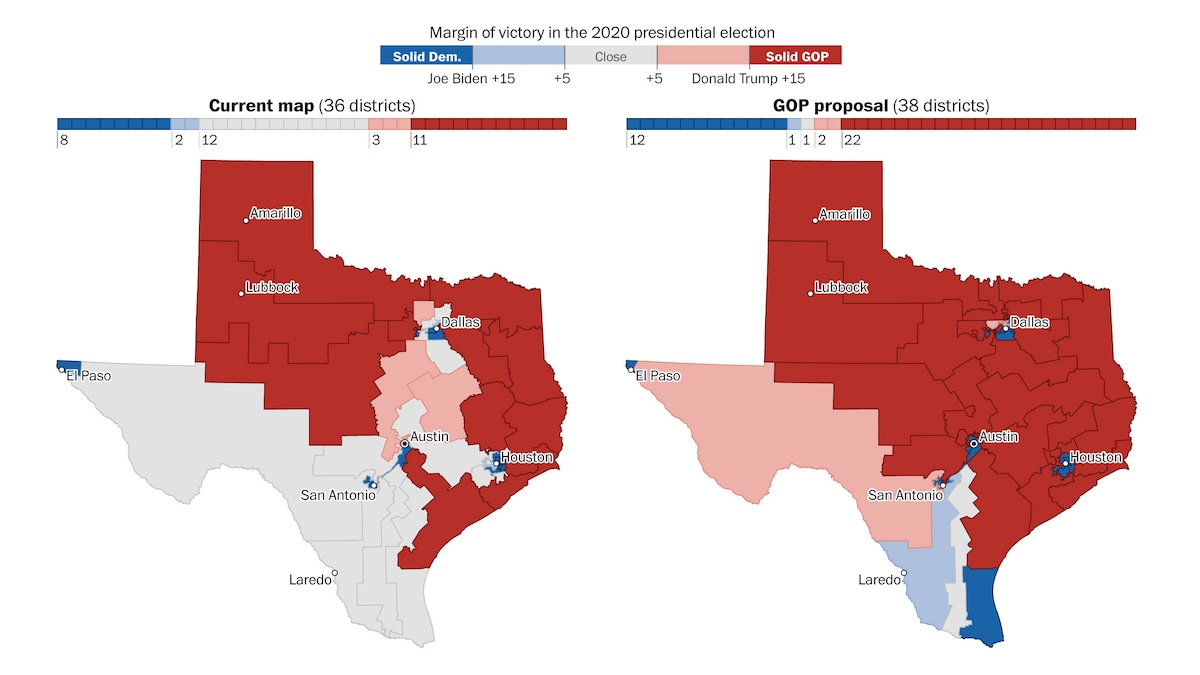 Republicans in Texas opened their congressional redistricting effort with a proposal that aims to insulate GOP incumbents from the state’s rapidly diversifying electorate, while diminishing the voting power of Latinos and Blacks in the state.

Lawmakers in the GOP-controlled state Senate responsible for drawing the lines created a new solidly Democratic district in Austin but did not draw a new Latino-majority district, despite Latino population growth being the primary factor in Texas acquiring two new seats in Congress effective in next year’s election. Another new seat — Texas, the fastest-growing state in the country, won two more seats for the next decade — would be a safe Republican seat that includes a slice of Houston.

The draft map did not dramatically change the current makeup of the congressional delegation. Instead, it eliminated most competitive districts, in what appeared to be an effort to take away Democrats’ shot at flipping those seats as their populations change over the next decade.

Republicans hold a 23-to-13 advantage over Democrats in the House delegation. Under the new GOP proposal, safe Republican seats would double from 11 to 22 and safe Democratic seats would increase from eight to 12. One seat leans Democratic and two lean Republican. Toss-up seats would be reduced from 12 to one.

[How congressional redistricting works in your state]

The remaining competitive seat is held by Rep. Vicente Gonzalez Jr. (D), whose 15th Congressional District along the Rio Grande Valley would go from being narrowly Democratic to narrowly Republican. Texas Republicans are hoping that former president Donald Trump’s strong performance in the Rio Grande in 2020 creates an opportunity for them to pick up that seat.

While the numbers in the Texas proposal represent small changes in the House delegation, they could still prove meaningful, given that Democratic control rides on a handful of seats. Several Republican or Republican-leaning states were looking to further diminish the slim Democratic majority as they craft maps.

State Sen. Juan “Chuy” Hinojosa (D), vice chairman of the Senate Special Committee on Redistricting, said in an interview that Democrats were not consulted on the map and only saw the draft when it was released publicly. He predicted that if the map is ultimately approved, Democrats would challenge it in court as discriminating against minority voters.

“At some point I would hope redistricting would reflect the people it represents in a community and that the voters elect the representatives and not the other way around,” he said.

Matt Angle, a Texas Democratic consultant who works on redistricting, pointed to the map’s treatment of Tarrant County, home to Fort Worth, where robust Black and Hispanic populations were divided, diluting their vote in safely Republican districts.

“I never expected the Republicans to put any of their own members at risk, but the method they use is to weaken minority voting strength,” he said. “The entire Texas population strength is driven by the growth in Blacks and Hispanics.”

State Sen. Joan Huffman, the Republican chairwoman of the Senate Redistricting Committee, did not respond to a request for comment.

The state Senate draft will need to be reconciled with one from the state Assembly, which has yet to release its version. The final map is expected to pass along party lines, given the large GOP majorities in both chambers, and be approved by Republican Gov. Greg Abbott.

Texas is the first test of how far Republican legislatures would go to try to secure their party’s power in Washington, as they decide in many states where growth has been predominantly among Democratic-leaning constituencies whether to protect GOP incumbents or draw more competitive districts that, if won, could expand their standing in the House.

Michael Li, a redistricting expert at Brennan Center of Justice, said the map shows Republicans fear the changing demographics of the suburbs and have sought to protect incumbents there by drawing districts that combine a diverse urban area with a deeply rural one.

He pointed to Republican Rep. Roger Williams’s 25th District, which Trump won by nine percentage points in 2020. Under the new map, the district, which includes part of Fort Worth, now encompasses large swaths of conservative areas to the west, making it a district that Trump would have won by more than 32 percentage points.

“It’s not only do they get more seats,” Li said. “Start with the premise that they already had an advantage. They’re shoring it up and taking competitive seats that Democrats have a reasonable shot of winning off the table.”

Republicans control more state governments than Democrats, giving them the upper hand in redistricting across the country. In 2011, they used their advantage to draw maps to solidify GOP control in key states for most of the past decade.

Republicans also completely control the drawing of the new congressional maps in three of the six states that are gaining seats in Congress: Texas, Florida and North Carolina — where the Democratic governor has no control over the map. In all three, population growth was driven overwhelmingly by expanding numbers of non-White residents in urban areas.

Meanwhile, in Oregon, the only state gaining seats in Congress where Democrats control redistricting, the partisan finger-pointing was flipped. Republicans, who for days threatened to walk out to deny the state Assembly a vote on the maps, accused Democrats of gerrymandering.

“This is by no means over,” said Christine Drazan, House Republican leader. “The illegal congressional map adopted today, clearly drawn for partisan benefit, will not survive legal challenge.”