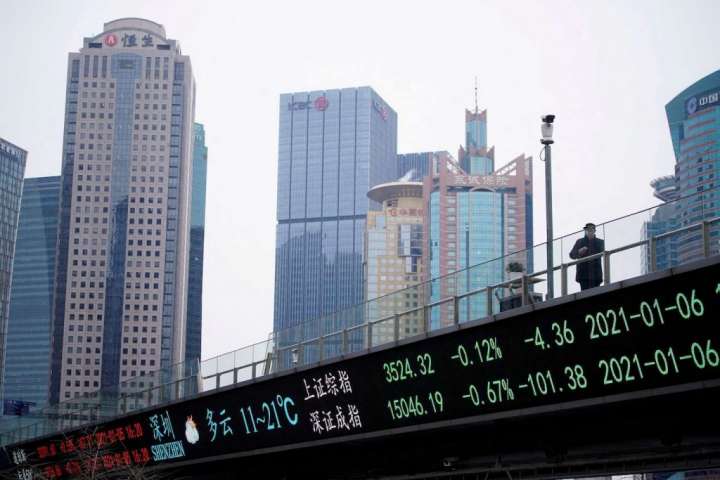 SHENZHEN, China — In this high-tech hub in China, engineers and investors fear the days of rapid growth may be behind them.

The numbers are grim: Among China’s Internet big three, messaging and gaming giant Tencent’s stock is down 41 percent from a year ago, e-commerce titan Alibaba’s has fallen 59 percent, and search king Baidu’s has sunk 37 percent.

Alibaba founder Jack Ma has kept such a low profile that false rumors circulated that he might have been detained.

China’s tech industry is suffering the compounded challenges of a regulatory crackdown, coronavirus lockdowns at home and trade sanctions from abroad. These woes have investors fearing the ceiling for growth might be closer to their heads than they previously thought.

“The optimism that I hear now is about Vietnam, Indonesia, Singapore,” said Duncan Clark, founder of Beijing-based consultancy BDA who has worked with China’s tech industry since the 1990s. “The dynamism has shifted from China.”

Around a decade ago, China’s Internet sector was flush with cash as starry-eyed overseas investors jostled to get a piece of China’s mobile boom. Start-ups burned through billions of dollars, as Chinese consumers enjoyed convenient and cheap ride-hailing, food delivery and other apps heavily subsidized by venture capital.

In recent weeks, murmurings of layoffs at major Chinese Internet companies have trended on social media and been the focus of local media reports. The discussions were so widespread that the China Cyberspace Administration took the unusual step of publicly commenting on the companies’ hiring trends last month, saying it had met with Tencent, Alibaba, Baidu and others and determined that the companies had still hired more people overall than they had let go since last summer.

“The recent online reports that many major Internet companies are undergoing large-scale layoffs have prompted heated public discussion,” the administration said in an online statement.

Tencent President Martin Lau, however, told analysts in March the company would “streamline” its noncore businesses, saying the industry’s growth had become “frothy and unhealthy.”

In Shenzhen, Tencent’s hometown, the local government is paying 10 percent of companies’ electricity bills this month as it seeks to mitigate some of their pain. In a survey of 97 companies conducted by the Shenzhen Venture Capital Association in March, 93 percent of respondents said they were suffering economic effects of the pandemic, with some factories reporting hundreds of thousands of dollars in losses due to production suspensions.

Some investors trace the moment they started to worry to November 2020, when Alibaba’s mobile payment affiliate Ant Group saw its public listing abruptly canceled by regulators. Its IPO had been poised to be the world’s largest in history.

Ma appears to have angered Beijing’s finance regulators in a freewheeling speech. Some officials had long felt the online finance sector had been allowed to expand too far without regulation. Still, industry executives were stunned Beijing would choose to forgo a blockbuster IPO that would have presented China as the global front-runner in a cutting-edge industry.

There were other signs in the following months that regulation now takes precedence over growth. Didi Global, China’s equivalent of Uber, announced plans to delist from the New York Stock Exchange after a Beijing cybersecurity probe into its operations. Tighter rules were rolled out for Internet companies, including limits for children playing video games to three hours per week.

One investor, speaking on the condition of anonymity because of the topic’s sensitivity, said the most startling measure was the ban last year on for-profit online tutoring, a popular service among parents eager to give their kids a leg up in school. The sudden wipeout of an entire, lucrative sector alarmed investors and reinforced the perception that regulations in China were fickle.

“It sort of went to zero,” the person said about a previously successful online education start-up that the person invested in.

Fraught relations with the West have also weighed on the industry. U.S. sanctions continue to hamper research and development for the likes of Huawei, while the tense political environment hampers sales for many Chinese companies in Western markets.

There is also the naturally evolving regulatory system as Internet companies become increasingly powerful. As with scrutiny of Facebook in the United States, Beijing has also been reviewing the role that Internet companies play in public life. In the past year, China has announced new regulations on tech companies’ use of consumers’ personal data and facial recognition scans.

The coronavirus pandemic added to the challenges for the industry, with factory production suspended for weeks across the country and workers locked down in their homes with short notice.

Richard Yu, Huawei’s head of consumer and auto business, warned in a social media post last month that there would be broad fallout along the supply chain if Shanghai production remained suspended through May.

In Shenzhen, daily life has resumed after a coronavirus lockdown in March. But the border with Hong Kong, long the gateway for Shenzhen’s tech companies to global investors, remains closed. Workers have had to add coronavirus tests every two to three days to their routine to maintain access to offices and public spaces.

“The steady economic recovery is facing pressure and challenges,” Shenzhen’s statistics bureau said in late April, in a report on the city’s economy in the first quarter. The bureau reported that retail sales of consumer goods had fallen 1.6 percent in the city, while import and export volume was down 2.8 percent.

Some observers, including Joerg Wuttke, president of the European Union Chamber of Commerce in China, say Beijing appears to be easing the regulatory crackdown on the tech industry for now, in consideration of the country’s economic challenges.

“The economy has digested enough shocks over the last year or so. We had the tech crackdown, and covid in various parts of China,” Wuttke said. “The opposite is now due.”

Wu reported from Taipei, Taiwan. Lyric Li in Seoul and Vic Chiang in Taipei contributed to this report.