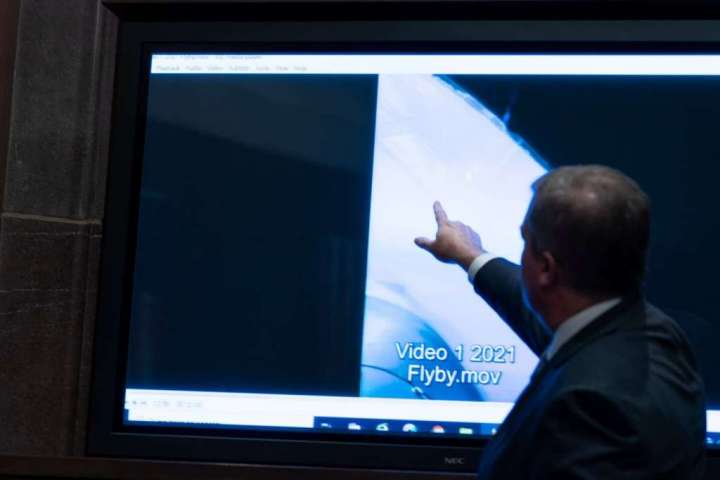 A House Intelligence subcommittee summoned military experts Tuesday to provide the first testimony in half a century about the existence of UFOs, and in the process, lawmakers helped answer the question that has fascinated humankind: Is there intelligent life down here?

The bipartisan leadership of the panel and the Pentagon witnesses did their best to keep things rational. They spoke not of “UFOs” but of “UAPs” — unidentified aerial phenomena — and emphasized that such things are real, if not exactly evidence of space invaders. They addressed the need to protect aviators and to ensure adversaries haven’t developed breakthrough weapons. But they stressed that they have nothing “that would suggest it’s anything nonterrestrial in origin,” and they cautioned against conspiracy theories.

Good luck with that.

At a time when a large chunk of the population won’t believe easily proved things — election fraud is rare, vaccines are safe — doubters aren’t about to believe U.S. government claims about UFOs. Republican officials have convinced supporters not to trust the facts or the experts. For the MAGA masses (and members of Congress) to focus now on the truth about UAPs would be, well, alien.

At Tuesday’s hearing, Rep. Mike Gallagher (R-Wis.) insisted that the Pentagon investigate an “incident” that “allegedly occurred at Malmstrom Air Force Base, in which 10 of our nuclear ICBMs were rendered inoperable. At the same time, a glowing red orb was observed overhead.”

Ronald Moultrie, the undersecretary of defense for intelligence and security, said the UAP Task Force hadn’t looked into it, explaining that there are many things “out there in the ether that aren’t officially brought to our attention.”

“I’m bringing it to your attention — it’s pretty official,” Gallagher shot back.

The congressman neglected to mention when the supposed “incident” took place: 1967.

Instead, Gallagher then asked about “the Admiral Wilson memo,” a document of dubious provenance that purports to reveal information about government UFO programs. The officials were unaware of the memo, so Gallagher entered it into the record. As a result, the hearing record now includes mentions of: an alien “cabal,” “crashed UFOs/alien bodies,” autopsies of alien bodies in Roswell, N.M., alien-derived technologies and, yes, alien abductions.

After the hearing ended, Rep. Tim Burchett (R-Tenn.), in the audience, immediately alleged “a coverup” by the military and said the only thing he learned is that “the coverup will continue.”

Speaking to reporters in the hearing room, he denounced the “arrogance of the military and the Pentagon and Congress” for not revealing more about UFOs. “I have a T-shirt that I sell on my website,” Burchett said. “It says more people believe in UFOs than believe in Congress.”

Burchett is one of those UFO believers. “If you look at hieroglyphics, if you look in caves all over the world, there’s something going on,” he explained. “I believe there’s something else out there — I really do,” he went on, adding: “I’m not an abductee. I know you’re going to make me into some tinfoil-hat-wearing redneck.”

Never! The congressman said he’s convinced UAPs are not Russian or Chinese craft. “It’s got to be something from out of this world,” he asserted. “There’s something in our airspace we don’t understand, that can do a 90-degree — I mean literally it would turn a human into a ketchup package.”

The witnesses didn’t help their case with their repeated promises to reveal more in a “closed,” “classified” hearing after the public one. They had extended trouble getting a video of a UAP to stop on the correct frame (“There it is … That’s not the one … There it went …”). And Moultrie confessed to the panel that he has attended sci-fi conventions, though he doesn’t “necessarily dress up” at them.

The subcommittee chairman, Rep. André Carson (D-Ind.) observed that UFOs offer “one of the few times we can demonstrate some degree of bipartisanship”; Crawford responded by winking at Carson. It was true, mostly: Even Republicans seemed concerned about the damage disinformation does to UAP awareness.

“When there are unsubstantiated claims or manufactured claims of UAP or kind of false information that’s put out there, what are the consequences?” asked Rep. Darin LaHood (R-Ill.), requesting examples “where people have been held accountable by this misinformation or disinformation.”

If the Trump-supporting LaHood really seeks the consequences of disinformation, he need look no further than Elise Stefanik (N.Y.), the No. 3 House GOP leader, who talked up the racist “Great Replacement” conspiracy theory before the Buffalo shooting suspect allegedly used it to justify his massacre.

Lawmakers, once finished, kept the hearing going because Stefanik, a committee member, was allegedly “en route” to question the witnesses. But she never showed up.

Was it an alien abduction? And, if so, where can we send the thank-you note?