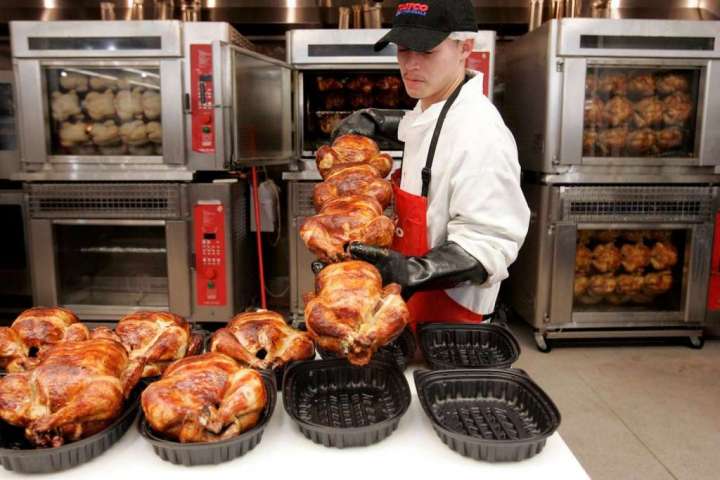 To better control the price and size of its chickens, Costco decided to wean itself off major poultry producers and build its own supply network in the Midwest, where the company created an entire infrastructure from scratch. It was a half-billion-dollar gamble that some worried would hurt the warehouse club’s reputation, even as it kept the company supplied with millions of chickens that Costco roasts in-house and sells at a loss to attract new members and more foot traffic.

Last year, not even 24 months into its poultry experiment, Costco was the target of an undercover investigation by Mercy for Animals, which showed a Nebraska barn crowded with birds, some with open sores, sitting in their own feces because they were too top-heavy to walk. The investigation led to a Nicholas Kristof opinion piece in the New York Times. It also led to news stories in Nebraska, where Costco built a $450 million poultry complex in Fremont, as well as a petition to urge the company to adopt better chicken welfare practices.

What it didn’t lead to, according to a lawsuit filed this month in Seattle, were changes with Costco and its poultry operations, which the plaintiffs claim still violate animal welfare laws in Nebraska and Iowa. They’re suing Costco’s executives and the directors for breach of fiduciary duties, which they claim “could subject the Company to significant liability.” The plaintiffs are represented by two firms that specialize in animal welfare and cruelty laws.

Plaintiffs Krystil Smith and Tyler Lobdell are Costco shareholders. They accused Costco’s leaders of being addicted to cheap poultry — to the detriment of the company, the shareholders and the animals slaughtered in the name of the massively popular Kirkland Signature rotisserie chicken, which sells for $4.99 a bird.

“If Costco continues its illegal mistreatment of chickens, it risks undermining its long-running and successful traffic-generation strategy,” the lawsuit states. “As more consumers learn of the mistreatment of Costco chickens, the benefits reaped using loss-leading rotisserie chickens to drive customer traffic and purchases . . . will vanish or greatly diminish because consumer preferences to not buy products made illegally or unethically will trump the lure of a ‘cheap’ chicken.”

Richard Galanti, Costco’s chief financial officer and executive vice president, said via email that the company would have no comment. Galanti is one of the 17 named defendants, which also include Ron Vachris, president and chief operating officer; W. Craig Jelinek, chief executive; and Hamilton E. James, a billionaire businessman who is chair of Costco’s board.

In an interview, Smith said that as a Costco shareholder, she felt “complicit” in the abuse of farm animals after watching the Mercy for Animals video. She says she doesn’t have any special affinity for animals, though she has been a vegan for 15 years and studied animal law in law school.

“But I don’t think you need to have a special affinity for anything to not harm them, or certainly to defend the law,” Smith, a practicing attorney in Maryland, told The Washington Post.

Lincoln Premium Poultry was established in 2016 to serve as the management company of Costco’s vertically integrated poultry operations, whose sole purpose is to supply chickens to the retail giant. The main complex in Fremont includes a hatchery, a feed mill and a 400,000-square-foot processing plant with a controlled-atmosphere stunning system, which uses gas to incapacitate birds before they’re slaughtered. Animal behaviorist Temple Grandin has endorsed the gas method as more humane to birds than electrical stunning.

The Mercy for Animals investigation did not target the Fremont complex but focused on an unnamed barn, one of hundreds in Nebraska and Iowa operated by farmers contracted by Costco to raise chickens for the retailer. According to Smith and Lobdell’s complaint, Costco and Lincoln Premium Poultry recruited about 120 people to become contract growers; their farms sometimes faced stiff opposition from neighbors who didn’t want the operations (expected to raise as many as 190,000 chickens every six weeks) fouling their air and water.

“Most of the individuals whom Costco contracted to raise chickens had never raised chickens before they started working with Costco,” the lawsuit alleges. “As a result, Costco is responsible for training these growers on how to raise chickens and how to care for animals, and for setting the animal welfare standards that these growers follow.”

In these contract barns, the plaintiffs allege, farmers raise tens of thousands of chickens “that are bred to grow unnaturally fast,” which leads to health issues, such as dead muscle tissue because the birds have trouble circulating blood and oxygen throughout their enlarged bodies. Chickens can be so heavy that, when they fall, they cannot get back up. Others may be too heavy to move, so they sit in one place, losing feathers and exposing their skin to the filthy barn floor. This can lead to ammonia burns.

These immobile chickens, the complaint alleges, may not be able to access food and water. Others may be too weak or injured to feed themselves. Costco, the plaintiffs claim, fails to provide the birds with individualized veterinary care.

At these farms, the lawsuit alleges, “disabled birds slowly die from hunger, thirst, injury, and illness. Costco’s directors and officers cause and are aware of these illegal practices; and have chosen to ignore red flags plainly illuminating Costco’s illegal behavior.”

These practices, Smith and Lobdell claim, violate the Nebraska Livestock Animal Welfare Act and the Iowa Livestock Neglect Law. The plaintiffs devote a significant chunk of their 50-page lawsuit to laying out the ways in which Costco’s officers and directors were aware of the alleged animal welfare violations — but disregarded them.

The suit notes that Costco released a statement in September regarding the welfare of its chickens. The company defended its operations, including the practice of raising fast-growing birds, and pointed out that the “minimum standards followed in these barns are based on those developed by the National Chicken Council.”

Mercy for Animals wants more from Costco. The organization, which aims to end industrial animal agriculture, wants the retailer to join more than 200 companies that have already signed the Better Chicken Commitment, which calls for higher animal welfare and processing standards. Popeyes, Chipotle, Subway, Shake Shack, Burger King and other chains have signed on, but according to Consumer Reports, Costco has not.

Smith and Lobdell allege that Costco’s leaders can’t let go of their $4.99 chicken, no matter what it means to the company’s reputation or the welfare of the birds. They claim the retailer sells more than 100 million of those rotisserie birds annually, increasing foot traffic and profits along the way.

Smith said that, as a shareholder, she was attracted to Costco’s professed values, including those around animal welfare. She says it doesn’t matter if improvements to animal welfare cause Costco to raise the price of its rotisserie chicken, which has remained at $4.99 for more than a decade. This is about the law.

“Costco knows the law is being broken in this case. They’ve got to course correct,” she said. “Nobody is above the law.”