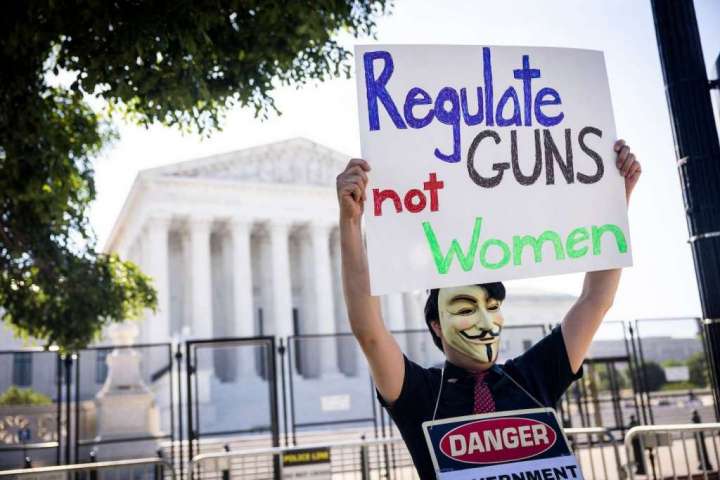 The Supreme Court has been criticized from the left for its decision Thursday holding that New York’s law regulating the carrying of handguns outside the home violates the Second Amendment. The Bruen ruling is actually a reasonable one, of limited scope. It should permit substantial gun regulations without endangering individual gun ownership.

The New York state law that the court struck down required a person to show “special need” to obtain a license to carry a handgun in public for the purpose of self-defense. The court’s six-member majority held that the Second Amendment protects the individual right to bear arms as well as to keep them. For all of the caterwauling about the parade of horribles that this ruling allegedly will unleash, the only thing the court did was this: hold as unconstitutional laws, like New York’s, that effectively deny most gun owners the right to legally bear their arms publicly (five other states, and Washington, D.C., have similar laws). That’s it, that’s the holding, as Justice Samuel A. Alito Jr. notes in his concurring opinion.

That relatively limited ruling leaves open a wide array of potential regulations and laws to limit the use of guns and even the ownership of some types of weapons. The majority explicitly notes that laws requiring a gun owner to show that he or she meets certain criteria to be permitted to carry a handgun in public are permissible.

Justice Brett M. Kavanaugh’s concurring opinion in Bruen notes that these laws, which are presumptively constitutional, can include requirements the applicant “undergo fingerprinting, a background check, a mental health records check, and training in firearms handling,” among other requirements. Those are pretty hefty requirements, yet all can be constitutionally imposed even after Thursday’s ruling to ensure the person who carries a handgun outside the home does so responsibly.

The court also implicitly allows states to ban the concealed carrying of firearms, including handguns. The ruling’s discussion of state practices at the time of the passage of the Second Amendment concludes that “States could not altogether prohibit the public carry of ‘arms’ protected by the Second Amendment or state analogues” (emphasis added). Further in its discussion, the court notes that the practices of antebellum America established that “States could lawfully eliminate one kind of public carry — concealed carry — so long as they left open the option to carry openly.” States that wish to suppress handgun carry outside the home can presumably pass laws banning concealed carry, citing Bruen as the authority.

States could also ban certain types of weapons from being carried openly outside the home. The court consistently takes pains in its ruling to distinguish handguns from other types of weapons, and notes that the open carry of weapons that would terrorize others was consistently banned at the time the Second Amendment was ratified in 1791.

<a href="https://www.washingtonpost.com/opinions/2022/06/01/uvalde-mass-shootings-graphic-images/?itid=cn" class="db mr-sm-ns mb-sm mb-0-m hide-underline fl" element="[object Object]" _id="NZ2WSJCOZVHC7ONNHJXXRQLAME" additional_properties="[object Object]" content="“Unusual weapons” could also be banned. Might a state ban the wearing of body armor, vision goggles, certain types of scopes, or the public carry of large semi-automatic weapons? Nothing in Bruen forecloses that, and a fair reading of the opinion suggests the court would look favorably on such regulations.” type=”text” originalidx=”7″ itid=”lk_inline_manual_13″ index=”12″ paragraphidx=”6″>

counterpointIt’s time to show the real horror of mass shootings. In pictures.

“Unusual weapons” could also be banned. Might a state ban the wearing of body armor, vision goggles, certain types of scopes, or the public carry of large semi-automatic weapons? Nothing in Bruen forecloses that, and a fair reading of the opinion suggests the court would look favorably on such regulations.

States might also be able to require gunowners to show proof of insurance against damage they might cause with their weapons. The court examines mid-19th century laws known as “surety statutes,” which required gunowners to post a bond under certain circumstances that would be forfeited if the owner “breached the peace.” Requiring gunowners to keep minimum levels of insurance is an obvious modern analog, one that meets with no objection when it is applied to motor vehicle licensing.

Many will surely complain that even these laws and regulations would not meet the current public need to limit mass shootings and murders with firearms. Perhaps not, but the balancing test the dissent would impose could easily lead to the undermining the right to keep or bear arms itself. That type of dishonest interpretation of the Constitution is precisely what the conservative legal movement was formed to oppose.

Progressive and gun control advocates have a simple remedy if they don’t like the current court’s interpretation of the Second Amendment: Propose a new one. Political actors used to propose new amendments all the time to overturn unfavorable court rulings; that’s why we have the 16th Amendment explicitly authorizing Congress to levy an income tax, for example.

If gun control is as popular with Americans as advocates argue, they shouldn’t have a hard time crafting an amendment that would overturn the court’s rulings and give states and cities the gun-control powers advocates seek. Such an amendment would be resisted, but such resistance would ultimately be beaten down if popular opinion is clear and firm.

The court’s ruling gives states and cities ample room to combat the misuse of firearms, provided they respect the core rights that the framers enshrined in the Constitution. Gun-control advocates should creatively make use of that space rather than continue try to undermine the Second Amendment itself.