A road trip through Yeats country in County Sligo, Ireland 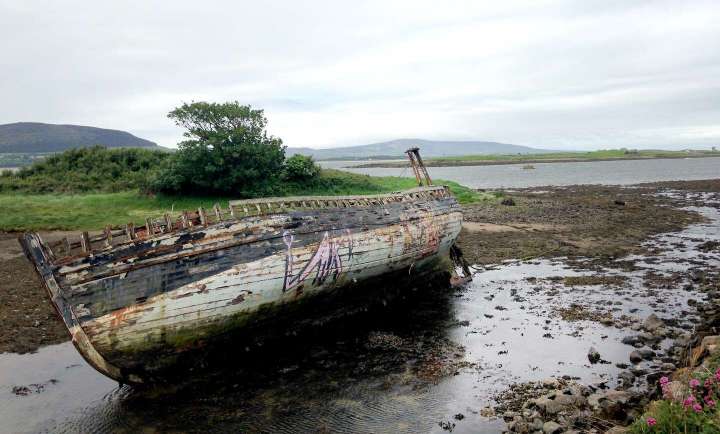 It began with immeasurable sadness. My relationship had ended, leaving me adrift in the world. The great tree upon which I’d carved my future had been rent from the earth, its roots tearing up the once solid ground on which I’d made my home. I needed to leave, out of the gray, disheveled city I’d found myself in; away from the news, so full of divorce and death. Traveling would beat sitting at home living a half-life, staring at my feet and feeling morbid. My mind went unbidden to Ireland, a place I’d never been, and therefore free from memory or reminder. Following the thought through, I pulled a book of W.B. Yeats from the shelf and read:

I will arise and go now, for always night and day

I hear lake water lapping with low sounds by the shore;

While I stand on the roadway, or on the pavements grey,

I hear it in the deep heart’s core.

That lake was Lough Gill, in County Sligo, and it promised everything I needed: rurality, quiet, time. Perhaps there I’d find my smile, among that rolling green and birdsong.

Travel can be like stepping over a ledge into an abyss: Where will I sleep? Who will I meet? What will become of me? When will I next take off my boots? The trick is to think positively; a traveler must be positive. The alternative is darkness. Plus, with every trip comes the hope of returning a different person.

Yeats was someone who needed comforting. His work shows a man who believed his life had ended before it had truly begun. His poems aren’t for brightening the day so much as for coming to terms with it. Take, for instance, his view of the world in “The Second Coming”:

Turning and turning in the widening gyre

The falcon cannot hear the falconer;

Still, I’d go with him, let him be my guide to the other side of this bogland of misery.

Yeats was born in Dublin and raised for extended stints in County Sligo, on the northwest coast. The imagery in many of his poems was lifted straight from the waters and glens of that region, which he called the “Land of Heart’s Desire,” and is known to others now as Yeats country. In that spirit, I didn’t hesitate in the capital but jumped in a car and headed straight for Sligo, slinging myself toward the western coast.

“We come to Sligo every year,” a woman visiting from Belfast told me on the street when I arrived. “It’s like going back in time. It hasn’t changed since the ’60s!” It looked true to me: Fringed bangs seemed to be in, as was loitering. And mutton chops were as common on men’s cheeks as they were on dinner plates.

Alas, the Yeats Society was fringed with construction, and the opening of its new exhibit was delayed. In a funk, I prowled the town. At a nearby bookstore, I asked the proprietor for a Yeats recommendation. He suggested “Last Poems” and pulled a copy from the shelf. “Do you know his poem ‘Politics?’ ” he asked, and handed me the book open to the page.

How can I, that girl standing there,

On Roman or on Russian

Or on Spanish politics,

Yet here’s a travelled man that knows

What he talks about,

And there’s a politician

That has both read and thought,

And maybe what they say is true

Of war and war’s alarms,

But O that I were young again

And held her in my arms.

“Quite apt these days, wouldn’t you say?” he said, as I worked hard to keep myself from weeping. I bought the book and took it to the path that skirts the Garavogue River. Looking up from the page, I couldn’t help but notice that every mallard duck in the waters had the green head of a male. There wasn’t a speckled hen in sight. “You, too?” I thought.

Modern life has descended uneasily on Ireland. Rural pride abuts an expanding and inescapable suburbanism. Sligo’s famine memorial, a statue of a bereft family of three, cowering together, their feet bare, their clothes loose on their emaciated bodies, erected to commemorate those who died in the potato famine of 1845 to 1852, today stands between a grocery store and a pub that pumps skyward the smell of hot grease.

In the countryside, things are different. At Hazelwood, on the shores of Lough Gill, I walked through a Jurassic-like forest of bramble, sedge and fern, and trees jacketed in soft moss. The soily, root-cellar smell of the wet forest made me hungry. Nearby, I found a pub where I was greeted by each patron in turn. A peat fire filled the room with the smell of scorched earth. While the barman poured me a clouded black pint, we spoke of Yeats, whom he considered “the best poet since Shakespeare.” No one ever degrades a local boy done good, especially one gilded by the Nobel Prize committee in 1923. Theirs was a prizewinning family: a year later, his brother, Jack, received silver at the Paris Olympics — not for sport, but painting. His winning work, “The Liffey Swim,” depicts the annual race in Dublin’s River Liffey.

The barman shook my hand when I left and said, “Good luck,” a better parting, I thought, than “goodbye” could ever be.

As darkness approached, I journeyed out to my hotel at Rosses Point, on the peninsula that hooks over the north side of Sligo Harbor. I took a walk in the falling dusk. I was alone on the road; in a paddock, a herd of Charolais cattle grazed. “Why is life a perpetual preparation for something that never happens?” Yeats wrote in his journal on Sept. 16, 1909. Before me were the images of 30 years; everything I’d done had led me here. My heart wrenched. Were the green fields, the ghostly cows, the misty air in the falling light enough to make life worth living?

That night, I kept a dream-shattered sleep, the windows rattling against a blustery storm. It continued into the morning, and, over breakfast, I asked the server whether it was meant to keep up.

“Ah, we’ve had a rotten go of it this spring,” he said. “But it’s not always like this. We get near 30 degrees centigrade in the summer.”

“Thirty degrees?” Such warmth (about 86 degrees Fahrenheit) seemed unimaginable looking out over the gray sea.

I left before he could haggle himself down to freezing temperatures. “It gets better!” he called after me. “Come back and you’ll see!”

Ireland can seem like a riddle with no answer, and the people like a tribe that would have preferred never to have been found. Both are reflected in the country’s sparse signage, which tells travelers there are things to see but is placed so that it takes no small amount of luck to find anything. After many frustrating turns, I decided to roam aimlessly on the backcountry lanes, coming upon scenes that were new to me and were therefore pleasant surprises rather than destinations.

Without such prior expectation, I was knocked flat by the arcing Gleniff Horseshoe, like the edge of a god’s coliseum. Likewise, the waterfall at Glencar, which spills over rocks like a ribbon of salt over the edge of a dark tablecloth. Most roads were encased in life, the trees bent over them, their branch tips touching to create a leafy channel. Bordered with high, thick hedges, it was like traveling through a green vein. Ireland does have the aspect of a human heart — a real one: west coast aortal peninsulas and an inner hinterland where “hill heaped upon hill,” as Yeats wrote, rolls with a smooth, muscular gloss.

And mountains. On the drive through the right atrium of County Leitrim, mountains rise fiercely, the grass giving way to striations of gray rock. Nearer the coast, Ben Bulben dominates the landscape, jutting from the earth like a great doorstop. The mountain is said to be the final resting place of Diarmuid and Gráinne, two eloping lovers of Irish mythology. Yeats, too, is buried in a modest grave at Drumcliffe Church.

There, I took out my book and found the poem inscribed on his tombstone, “Under Ben Bulben”: “Cast a cold eye / On life, on death. / Horseman, pass by!” Being under that very mountain as I read was comforting; it was a kind of clarity. From Yeats’s original gaze over this foreign countryside, to a book, to me, then back again. It was evidence of the passage of my life as much as it was of Yeats’s. I had felt on the brink of devastation. But there is life in giving in to the march of time, and knowing your words and sights might one day live on. Hope was the key to that kind of immortality, which provided the courage to see the peeking light breaking the darkness.

Every day on the back roads, I’d passed walkers bent over against the slashing rain. One day, I stopped to offer one a ride. “Oh, no, thank you,” she said, her face wind-whipped and dripping, her smile infectious. “It’ll pass. Look, there comes the sun now.”

Patterson is a writer based in Gladstone, Manitoba. His website is jrpatterson.ca. Find him on Twitter: @JRPatterson9.

Located at the end of Rosses Point Peninsula, the Yeats Country Hotel has views out over Sligo Harbor, Coney Island and Oyster Island. A nearby golf course gives it a country club feel, and the on-site spa offers seaweed baths and massages. Breakfast included. Rooms from about $80.

Named after Yeats’s childhood house at Rosses Point, the Elsinore offers traditional Irish, Italian and vegetarian dishes. Located at the Yeats Country Hotel. Open daily, 8 to 10:30 a.m. for breakfast and 6 to 8 p.m. for dinner. Entrees from about $16.

The Yeats Society hosts an exhibition on the people and places that influenced the life and career of the Irish poet. It hosts regular poetry readings and literary events. The upstairs Hyde Bridge Gallery showcases work by Irish and international artists. Yeats Building open Tuesday through Saturday, 10 a.m. to 3 p.m.; Hyde Bridge Gallery open until 4 p.m. Entry to Yeats Exhibition about $5 per person; gallery free. Children younger than 12 free.

This forest, the setting of Yeats’s “The Song of Wandering Aengus,” is on the shores of Lough Gill and offers a long walking path. Open daily, year-round.

An approximately 50-foot-high waterfall, mentioned in Yeats’s “The Stolen Child,” is located at the end of a short, paved walk. Open daily, year-round.

Pro tips for finding a little space on vacation

Flying is a mess. Blame the airlines.

Ferry tales in the Pacific Northwest

In the Berkshires, smaller attractions pack a big punch