Takeaways from primaries in Kansas, Michigan, Missouri and Arizona 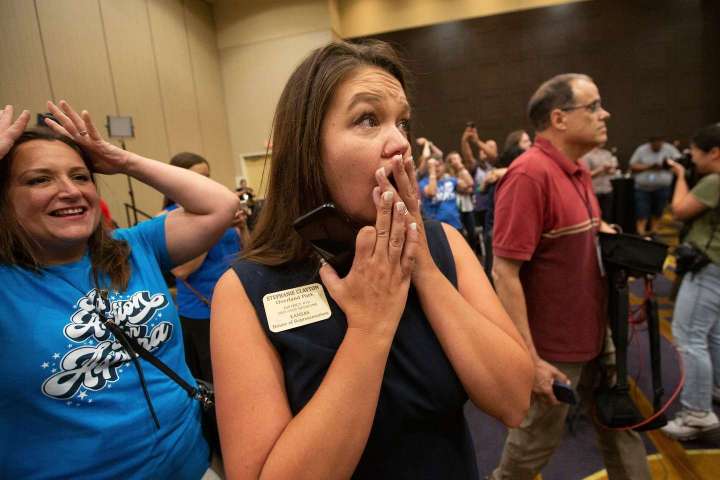 On Tuesday, Kansas voters had a chance to strike down the state’s constitutional right to an abortion. They resoundingly decided to keep abortion rights in their state, which is one of the last havens for abortion rights in the Midwest. Meanwhile, 2020 election deniers did well in Arizona.

Here are takeaways from a big primary night across the nation on Tuesday, in Kansas, Michigan, Missouri and Arizona.

1. Kansas voters want to keep abortion rights in their state

Tuesday was a bellwether for the abortion rights fight in the post-Roe world: Would voters in a red state move to keep abortion access?

Many of Kansas’s neighbors have banned abortion since Roe fell. But abortion opponents needed to change the state’s constitution before the conservative legislature could move to do the same. Hence, this ballot measure — which came under criticism for being on the ballot during a primary rather than a general election, and for misleading arguments and texts about it from the antiabortion side.

If the measure passed, it could have ended abortion access for thousands of women in the Midwest and Texas, who had been traveling to Kansas for abortion care.

In the end, it wasn’t even close: With almost all results in, about 60 percent of voters rejected this amendment, compared to 40 percent in favor of changing the state constitution to allow for abortion bans.

Polls had suggested that the measure could go either way, but Kansas is also a red state (albeit one with a Democratic governor). So what led to the somewhat surprising result? Motivated Democratic voters. Other than this ballot initiative, there weren’t many reasons for them to come out to vote in this primary. Yet Democratic turnout was up more than 60 percent compared to 2018, when Kansas Democrats were deciding who should be their gubernatorial nominee.

Clearly, abortion can help motivate left-leaning voters to show up at the polls.

This is good news for Democrats across the nation who are hoping they can recreate that same dynamic in their races.

2. Election deniers have a good night

If nothing else, this primary season has shown that, for many Republicans, denying 2020’s election results is the price for entry. A Washington Post analysis in June found that more than 100 Republican primary winners have backed former president Donald Trump’s false election claims.

That number is likely to grow quite a bit after all the results from Tuesday are in — particularly in Arizona, which has become a hotbed for election denial.

Results are still being counted in some races, but it’s possible that candidates who back Trump’s false claims of election fraud could win nominations to four of Arizona’s top positions: governor, U.S. Senate, secretary of state and attorney general.

Election denier Blake Masters won the GOP’s nomination for U.S. Senate in Arizona on Tuesday. Arizona Republicans also nominated Mark Finchem for secretary of state. He is a leading driver of a conspiracy theory that the election was stolen in Arizona’s second-largest county, Pima County.

The Arizona governor’s GOP primary is too close to call, but it’s possible that Republican voters will chose Kari Lake, another Trump-backed, unapologetic denier of the 2020 election results, who said if she were elected, she would try to get rid of voting machines and vote by mail — even though most Arizonans vote that way.

Results are still coming in for the Republican primary for Arizona attorney general, but the winner is likely to be one of two candidates who have embraced election denial.

Whether those candidates win the general election in November, in a state that voted for Joe Biden, is another question. Republicans are justifiably worried that Masters is too polarizing to overthrow the well-known (and well-funded) Sen. Mark Kelly (D). “Whatever their cheating capacity is, I’m pretty sure they pulled out all the stops,” Masters said of the 2020 election.

Kelly was expected to be one of Democrats’ most vulnerable senators in 2022. His path is potentially easier now that his opponent is Masters, who has Trump’s endorsement and a history of being accused of making antisemitic and racist remarks.

Republicans may have more problems in Kansas, where former secretary of state Kris Kobach won his party’s nomination for attorney general, giving him a second political life. Kobach ran for governor in 2018, and he lost to Democrat Laura Kelly. Kansas voters saw his focus on election fraud back then as unnecessary; it’s unclear if he can win statewide.

3. Another pro-impeachment Republican loses his job

Tuesday was also one of this primary season’s biggest tests of how GOP voters feel about Republicans who supported Trump’s impeachment. Three out of the 10 House Republicans who voted for impeachment faced pro-Trump challengers this week.

Rep. Peter Meijer in Michigan lost his primary to an extreme far-right candidate, John Gibbs. (Democrats were also rooting for Gibbs — so much so that they ran a controversial ad for him, getting lots of criticism from within their own party for boosting an election denier.)

In Washington state, two House Republicans who voted for impeachment — Jaime Herrera Beutler and Dan Newhouse — had a better night. They appear set to finish in the top two in their primaries, which will allow them to move on to the general election in November against Democratic opponents. For Newhouse, who represents a Republican district, that probably means he will be back in Congress next year.

4. GOP breathes a sigh of relief in Missouri’s Senate race

The last thing Senate Republicans in Washington wanted was for disgraced former Missouri governor Eric Greitens, pushed out of office after allegations of sexual misconduct and now facing child abuse accusations, to win his party’s Senate nomination and potentially put this open seat in play. Republicans are already struggling with controversial Senate candidates in Georgia and Pennsylvania,, which could cost them a chance at the Senate majority.

Missouri, which has trended sharply conservative over the past decade, should be an easy win for them.

And it looks like it still will be: Greitens lost the GOP primary, despite appearing to be the front-runner for much of the race. Instead, Missouri Attorney General Eric Schmitt (R) will be the party’s nominee. Former president Donald Trump, who reportedly liked Greitens, dodged making a decision about whom to support, endorsing“ERIC” (no last name) the day of the primary.

How a Trump endorsement scramble in Mo. ended in absurdity: Vote ‘ERIC’

Arizona House Speaker Russell “Rusty” Bowers (R) is no slouch when it comes to conservative views. But he also refused multiple efforts from Trump and his allies to find a way to convene the state legislature in 2020 and flip that state’s election results from Biden to Trump, which probably would have been illegal. He testified about his experience to the Jan. 6 committee, including as a live witness. “I said, ‘Look, you are asking me to do something that is counter to my oath,’” Bowers testified.

In part because he became so well-known for this, Bowers lost a state Senate primary race on Tuesday to former state senator David Farnsworth — something he fully expected, reported The Post’s Yvonne Wingett Sanchez.