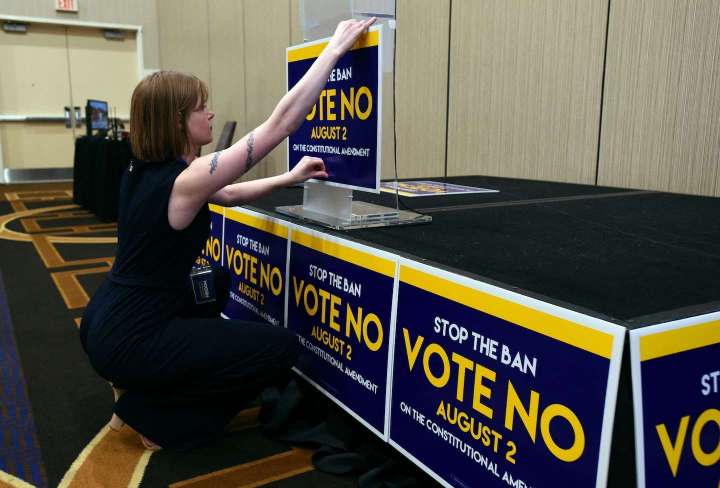 Democrats are salivating at the prospect that Kansas’s vote on Tuesday in support of abortion rights might give them a way out of an otherwise disastrous midterm cycle. History suggests they should curb their enthusiasm.

They should consider another landmark ballot initiative: California’s 1978 vote for Proposition 13. The measure, which cut property taxes by about two-thirds and severely limited the state’s ability to raise taxes subsequently, was an earthquake for its time. For decades, politics had been dominated by the New Deal coalition, which consistently expanded government’s reach and hiked taxes to pay for it. Yet 65 percent of Californians voted to go in the opposite direction. The fact that some of the largest pro-tax-cut majorities came in areas dominated by the working-class, dyed-in-the-wool Democrats, made the vote politically frightening for the Democratic Party.

Republicans sprang into action almost overnight. Proposals for a tax cut, which had previously languished and was supported only by the then-tiny supply-side economics movement, became party orthodoxy. The party sent leaders such as former California governor Ronald Reagan around the country in “tax squads” to make dramatic tax-cutting a signature issue for the fall midterms. They hoped this would spark a groundswell of public opinion that could help the GOP, which had only 143 seats in the House, make significant gains.

Those hopes were dashed in the midterms later that year. The GOP gained only 15 House seats and remained utterly powerless. It picked up three seats in California, but Democrats continued to dominate the state’s congressional delegation. The same result occurred in the California legislature, where Republican gains were small and Democrats still easily controlled both chambers. Reagan had hoped Prop 13 would ignite a “prairie fire” that would sweep the nation; instead, the blaze was quickly stamped out.

It’s easy to understand why in retrospect. Democrats shifted some ground to defang the threat, passing a capital-gains tax cut that was dead on arrival before Prop 13. Democratic California Gov. Jerry Brown had opposed Prop 13, but shifted immediately after its passage to ensure that it was faithfully implemented rather than undermined. Brown trailed his Republican opponent, Attorney General Evelle Younger, by four points when Prop 13 passed. By November, thanks to his switch in position, he was able to crush Younger by nearly 20 points.

Democrats and Republicans can take some lessons from the Prop 13 experience. First, voters do not automatically associate a party with a position on a ballot initiative, even if they have good reason to do so. Many partisans might disagree with their party on one issue but still prefer it overall. Democrats who note that a minimum of 20 percent of Kansas Republican primary voters on Tuesday also supported abortion rights should not assume they will abandon their party in the fall.

Individual positions also matter. Brown didn’t try to fight against the tide of public opinion. Voters forgave his prior opposition when they saw he was willing to back their priorities. Similarly, Republicans who campaign against abortion rights in the first trimester of pregnancy are likely to be viewed differently by swing voters than those who support limits in later stages of pregnancy.

Republicans can also adapt by emulating Brown. His adroit shift gave something to both sides. He resisted liberal efforts to undermine Prop 13 while also steering massive amounts of state revenue to shore up public services. Republicans running for federal office could do something similar by pledging not to support any federal legislation on abortion, saying it is properly a state issue. That would likely sooth the fears of swing voters who support abortion rights and worry about a nationwide ban while letting antiabortion activists win victories in places where they hold the upper hand.

None of this diminishes the significance of the Kansas vote. Polls have long showed that Americans tend to support abortion rights in the early stages of pregnancy and support restrictions or outright bans in later stages. The fact that nearly 60 percent of Kansas voters, and implicitly nearly all non-Republicans, endorsed that view is incredibly important for national politics going forward. The Republican Party’s first president, Abraham Lincoln, said that “public sentiment is everything.” Today’s party would be well-advised to follow his advice and work to mold opinion on abortion rather than stand in opposition to it.

Indeed, Prop. 13 helped set the contours of Reagan’s landslide victory in 1980, in part because Democrats nationally never followed through on their initial accommodations to that sentiment. They were forced to play catch up in the years after Reagan’s 1984 landslide. The challenge for Republicans is to avoid that conundrum.

Kansas’s abortion vote might prove to be as important as Democrats hope and Republicans fear. Nevertheless, how both parties react to the referendum’s results will likely be more important to the midterms than the referendum itself.