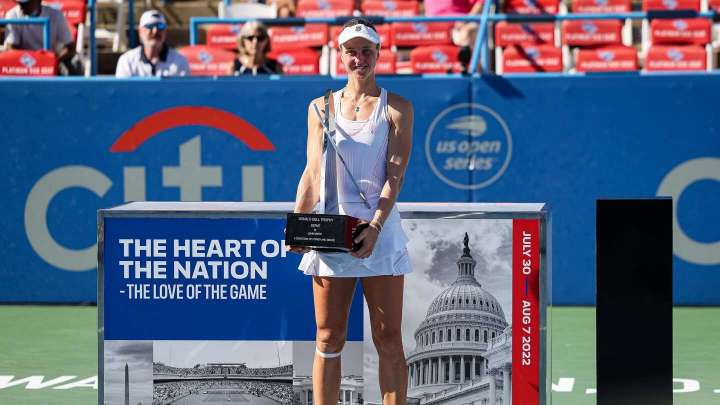 Liudmila Samsonova bobbled the Citi Open trophy for just a moment Sunday before hoisting it triumphantly with a big smile — perhaps due to nerves or the fact that she had just won a three-set match in merciless heat.

Or maybe Samsonova was simply out of practice. The 23-year-old Russian’s previous match before arriving in Washington was June 19 in Germany because of Wimbledon’s decision to ban Russian players from its tournament this summer. Samsonova had one month of only practice, with no match play, to prepare for the North American hard-court swing that leads into the U.S. Open.

A tip of the hat to the practice court, then. Samsonova defeated 37-year-old Kaia Kanepi, 4-6, 6-3, 6-3, on Stadium Court at Rock Creek Park Tennis Center with a strong display of her power hitting and steely focus in a match that featured plenty of crowd-pleasing line-clippers.

With long limbs operating like a bullwhip and an impressive vertical reach, she also served 10 cracking aces that topped out at 117 mph.

The title in Washington is the second of Samsonova’s career; she won her first at the German Open in June 2021. It made for a fruitful week for Russians emerging from the Wimbledon ban: World No. 1 Daniil Medvedev won the singles title at an ATP tournament in Los Cabos, Mexico, on Saturday, and Daria Kasatkina won a WTA tournament in San Jose on Sunday night.

“I think we are all very angry about the situation,” Samsonova said. “I mean, it was a really tough month what was going. I think we have a lot of time to work, so I think we use it very well.”

Samsonova called her victory a “dream” after a turbulent few months. She started working with a new coaching team in April and had trouble obtaining a visa into the United States because her old one expired in July.

She found out she would be allowed to travel to Washington just two weeks ago.

“No, it’s amazing. I didn’t expect it at all. … I was practicing one month,” she said. “It was very tough for me. So, yeah, I’m so happy about this week. It’s unbelievable.”

Even without the circumstances surrounding her win, capturing the trophy would have been another promising benchmark on what has been a steady climb for Samsonova, ranked 60th in the world, over the past few years.

Although born in Russia, Samsonova moved to Italy as a baby and spent most of her life there, choosing to represent the country until 2018. Switching to play for Russia, a nation rich in successful tennis players, gave her a sense of small-fish, big-pond freedom. Only four Italians were ranked in the top 100 entering Sunday’s final while eight Russians populated the list, with many, many more striving for entry.

Samsonova appreciated the relief of pressure, though her tennis truly took off in Germany last year after she switched coaches. She won her first trophy in the first finals appearance of her career and made her top-100 debut shortly thereafter.

“It was the first time that I had, like, four people working for me, and this helped me a lot,” she said last week. “It improved my game, my physical [fitness], everything. And then, of course, the hard work and believing more in me. That was the key.”

She owned one win over No. 37 Kanepi entering Sunday’s final, at Wimbledon last year, and wanted to start strong against the veteran. When those hopes flew out the window, Samsonova refocused and turned her attention to solving Kanepi’s serve.

Break points were not easy to come by for the first hour of the afternoon. Both players pummeled the ball throughout the first set in search of an edge. Samsonova had a hair more success moving Kanepi around the court to gain minimal footholds within games — never pushing so far as to get a break point — but each time the Estonian was in a vulnerable position, she erased mistakes with line-clipping groundstrokes or an ace.

It was Kanepi who finally converted the first break point of the match in the 10th game to steal the first set.

Samsonova showed no dip in focus nor physical play, and with the second set knotted at 3, Kanepi started to get tight. She sent a forehand into the net at 30-30 to give Samsonova her first break point of the match, and on a nine-stroke rally during the next point she put a backhand long.

The Russian needed to do little but hold on and stay consistent after that. She rattled off five games in a row to win the second set and start the third with a solid hold.

Kanepi, a journeyman playing for her first trophy since 2013, entered the match leading the tournament with 30 aces. While her serve held strong — she had five aces to Samsonova’s 10 — she tensed as the match wore on, calling for a medical timeout early in the third set, and the rest of her game broke down.

Samsonova broke her to take a 4-3 lead, then finished the match out with ease. All that was left was to lift the trophy.