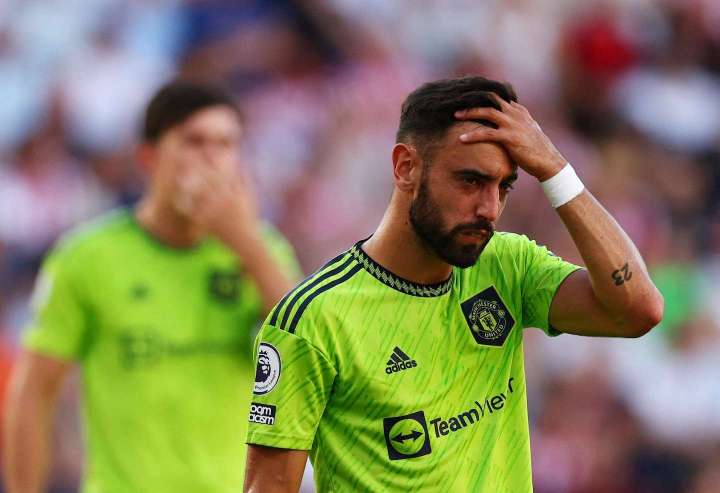 Hours after sending the internet into a frenzy with a tweet suggesting that he was buying Britain’s Manchester United soccer club, Elon Musk issued a clarification: It was all a joke.

“Also, I’m buying Manchester United ur welcome,” the world’s richest man wrote Tuesday as a follow-up to a tweet that said he supported “the left half of the Republican Party and the right half of the Democratic Party.”

Early Wednesday morning, Musk responded to a query on the social media platform by saying he was referencing a “long-running joke on Twitter,” and that he was “not buying any sports teams.”

Musk has a history of irreverent tweets about business purchases. In April, after the board of Twitter accepted his $44 billion offer to buy the company, he wrote that he was “buying Coca-Cola to put the cocaine back in.”

The Tesla chief executive’s Twitter proclamations have occasionally landed him in hot water. In 2018, he tweeted that he had “Funding secured” to take Tesla private at $420 a share — a claim later found to be untrue, but only after it had caused the stock price to jump. Musk and Tesla were each fined $20 million, The Washington Post reported, and he also had to step down as Tesla board chairman and agree to have potentially market-moving tweets vetted by an approved securities lawyer.

Manchester United is worth $4.6 billion, according to Forbes, making it one of the sport’s most valuable franchises. The club, which is listed on the New York Stock Exchange, did not immediately respond to a request for comment.

United has won a record 20 domestic titles and counts among its former players stars such as David Beckham and Wayne Rooney, who have also played in Major League Soccer. But the club has endured one of its worst starts to a season, sitting at the bottom of the English Premier League after losing its first two matches. Its storied stadium, Old Trafford, is in dire need of refurbishment. And a long-running fan protest of United’s controlling shareholders — the Glazer family, Americans who also own the NFL’s Tampa Bay Buccaneers — continues to rumble.

LAFC — the MLS version of ‘Showtime’ — is turning into a hit

The Glazers took over United in 2005 through a leveraged buyout, involving borrowings of approximately $1 billion that the club was then forced to repay. By 2018, the takeover had drained the club of more than about $1.2 billion in interest, costs, fees and dividends, the Guardian reported.

The family would need to agree to any potential takeover because they own a special class of shares that gives them enhanced voting rights. They have not previously indicated a desire to sell the club.

In a Twitter thread this week, soccer finance analyst Swiss Ramble pointed out that United has paid roughly $900 million in interest since the buyout, and the club’s interest payments in the past 12 years nearly equaled that of the rest of the Premier League combined. United is also the only Premier League club to pay dividends to its shareholders — chiefly the Glazers — and as of this spring, it was more than $716 million in debt, financial filings show.

While United continues to spend heavily on transfers under the Glazers, fans have long been disgruntled by the sums the family has taken out of the club and by its lack of success in the past decade. An organized campaign against the owners began in 2010, and that simmering anger boiled over in 2021 when the Glazers revealed plans to join other clubs in a breakaway European Super League. Supporters invaded Old Trafford in protest, causing the postponement of a game against archrivals Liverpool. Plans for the breakaway league have since been shelved.

A fan group is set to stage another demonstration against the owners when Liverpool visits for a league game Monday. Separately, the Manchester United Supporters Trust, the official supporters’ group, likened the Glazers’ ownership this week to a fish that “rots from the head” and said it would continue to publicize any “credible, lawful and peaceful protest.”

Faiz Siddiqui contributed to this report.