Eastern Canada braces for Fiona to be ‘a storm everybody remembers’ 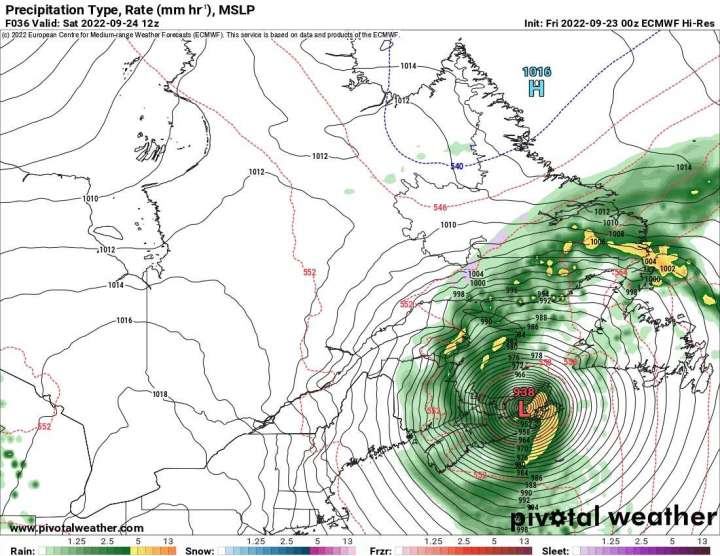 Authorities in eastern Canada are warning residents to be ready Friday for a “historic,” potentially record-setting storm as Hurricane Fiona approaches with more than 5 feet of ocean surge possible, hurricane-force winds and 6 or more inches of rain in many areas.

In Nova Scotia, where Fiona is forecast to make landfall early Saturday, residents are being advised to prepare for potentially lengthy power outages, which in some areas could also mean a loss of running water. The government planned to open shelters Friday afternoon for homeless and other vulnerable populations to ride out the storm, and was also readying aid expected to be necessary once the storm passes.

While it is not uncommon for Atlantic hurricanes to brush Canada’s maritime provinces, that usually happens when storms are significantly weakened as they move into colder waters. But Fiona is expected to remain a “powerful hurricane-force cyclone,” according to the National Hurricane Center, as its outer bands begin to lash the country late Friday and remain intense as it moves into the Gulf of St. Lawrence on Saturday.

Projections suggest that, by some measures, the storm will be the most intense on record to strike Canada.

“It’s going to be a storm that everybody remembers,” said Bob Robichaud, warning preparedness meteorologist for Environment and Climate Change Canada, at a news conference Thursday.

Fiona’s likely impact to Canada is the latest marker of an Atlantic hurricane season that remained quiet through what is typically the heart of storm season, but has since turned active. The storm is one of five tropical systems meteorologists are watching in the Atlantic basin, including one that organized into a tropical depression early Friday and could soon become a threat to the Gulf Coast as Tropical Storm Hermine or Ian.

As of Friday morning, Fiona was about 600 miles south of Halifax, Nova Scotia, headed for Canada’s maritime provinces at a speed of 35 mph, with winds of up to 130 mph at its core. Hurricane conditions are expected to reach the country by late Friday night or early Saturday morning.

Here’s what Hurricane Fiona’s surf looked like, from atop a 50-foot wave

Weather models suggest Fiona will probably be the strongest recorded storm, in terms of barometric pressure, to ever hit Canada. Fiona’s central pressure is forecast to be below 940 millibars, the existing record, when it makes landfall, probably sometime around daybreak Saturday.

Whether that translates to record gusts “remains to be seen,” Robichaud said, adding that “ ‘historic’ is a good characteristic of what this is going to be.”

Hurricane warnings are in effect for most of Nova Scotia as well as Prince Edward Island and western Newfoundland, where meteorologists predict 3 to 6 inches of rain, with up to 10 inches in some areas, and hurricane-force winds of at least 74 mph. Tropical storm warnings extend from New Brunswick to eastern Quebec to northern Newfoundland, where rainfall could reach 5 inches and winds at least 39 mph.

Fiona is expected to lose its tropical characteristics and become a post-tropical cyclone some time Friday, though that will not lessen its probable impact. Although its core of violent winds may weaken somewhat, the storm will expand in size, with tropical-storm force winds buffeting a large area.

Nova Scotia, home to about 1 million people, was preparing for the worst of the storm with memories of Hurricane Dorian in 2019 fresh in many minds. That storm caused half a million power outages, most of them in Nova Scotia, according to the CBC. Its winds knocked down trees, destroyed roofs, wharves and boats and toppled a crane in Halifax, causing an estimated $102 million in damage in Canadian dollars.

Even as Fiona passed Bermuda from a distance of about 185 miles, the island saw widespread power outages and gusts of at least 70 mph.

More than half of Puerto Rico remained without power and communities remained cut off by landslides Thursday, days after Fiona battered the island.

Nova Scotia Power warned of widespread power outages, with trees still in full bloom and soils relatively soft. And the blackouts could be lasting, with crews expected to wait for winds to calm before they can safely begin repairs, said Dave Pickles, the utility’s chief operating officer.

Flooding and wind damage is raising concern about transportation issues across the province, with a single bridge connecting Cape Breton Island to the north and mainland Nova Scotia, including the populous Halifax region, to the south.

“We have one way in and one way out,” said Amanda McDougall, mayor of the Cape Breton Regional Municipality. “That causeway is incredibly, incredibly important.”

Other landmark storms to hit Canada in recent decades include Hurricane Juan in 2003, which killed eight people, and Igor in 2010, which killed one person and washed out roads and railways in Newfoundland and left communities isolated for days, according to the Canadian Hurricane Centre.

Canada’s Atlantic provinces have historically sat at the northern limit for Atlantic hurricanes, with storms typically beginning to dissipate before making landfall there. But that has changed in recent decades.

Hurricanes or hurricane-strength post-tropical storms have made landfall there once every one to three years since 1951, according to the country’s hurricane center. But as the Atlantic basin has remained in an active cycle for tropical cyclones, that has meant more threats for Canada as well, with a hurricane hitting land every other year since 2000.