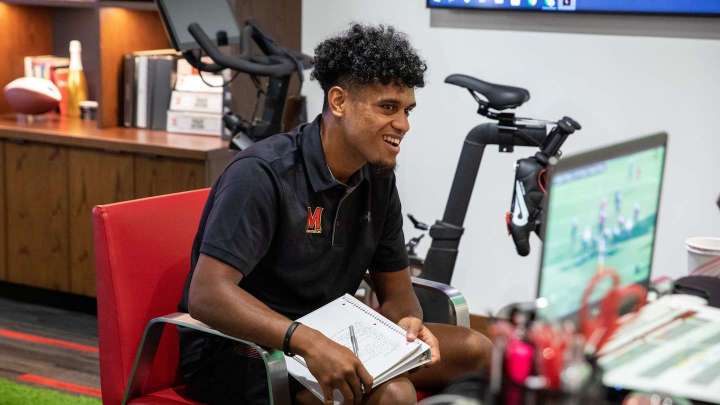 Taulia Tagovailoa’s pen rarely stops moving. With a spiral notebook on his lap and a television to his left, Tagovailoa’s eyes dart from the screen to his notebook, to his coach and back to the screen. He answers questions and nods along. And he writes the entire time. What exactly goes in the notebook? Everything, he says.

It’s a serious, and at times monotonous, hour and a half inside Michael Locksley’s office the Tuesday before the SMU game. The coach, leaning back in his chair, holds the remote and flips through plays from practice — showing one angle and then the next and pointing out precise movements as the action unfolds. His comments might be about a safety’s shoulder, another defender’s hips or Tagovailoa’s feet. The reminders travel from Locksley’s lips into the notebook — and then hopefully to the playing field during Maryland’s game each Saturday.

“Coach Locks, the things that he gives me — to me, it’s gold,” said Tagovailoa, the Terrapins’ third-year starting quarterback.

The coach asks questions — “What coverage are you expecting on a normal down and distance?” — and the quarterback almost always answers correctly. He knows the coverage with which one play doesn’t work, and he knows on another, he’s supposed to put the ball on the tight end’s left pad. It’s a robotic routine, with occasional interjections.

“Did you talk to Tua?” Locksley said. “What’s the deal? Is he going to come up or not?”

Tagovailoa’s brother, who played for Locksley at Alabama and is now the quarterback for the Miami Dolphins, played in Baltimore the day after Maryland faced SMU last weekend. Taulia made it to his brother’s game, but Tua did not watch the game in College Park. Locksley and Taulia correctly assumed that would be the case, and then their focus shifted back to the film.

Tagovailoa writes so he remembers and so he can flip through the pages for reference later. After each game, Tagovailoa rips the sheets from the notebook, staples them together and sets them on a desk in his living room. This week, there are stacks at home from the first three games, while the notes for Michigan, as he prepares for the Big Ten opener, keep growing each time he pulls the book from his backpack. He keeps all the pages from last season in a big binder.

By the time Tagovailoa meets with Locksley this Tuesday night, the office window looks out onto a dark practice field. Tagovailoa woke up around 6:15 a.m., then met with Enos. He had breakfast and class, then answered questions at his weekly news conference. After a study hall, he had lunch and more meetings. He practiced, ate dinner and watched film with wide receiver Jeshaun Jones. Around 9 p.m., Tagovailoa came here to go through practice tape, he said, “with the sensei.”

Tagovailoa has led Maryland to a 3-0 start this season after setting multiple school passing records last year. He still often thinks about not wanting to let the team down. He’s the leader of the offense and quarterbacks can have an outsize impact on a game’s outcome.

“That weighs on you a little bit,” he said. “I think doing these meetings, doing all [the work to prepare], you feel better, and I feel like for me and Enos and Locks, we sleep better at night knowing that we did that.”

This season, Tagovailoa has begun attending some of the coaches’ game-planning meetings. He likes understanding why the staff makes certain decisions, and then he can relay that information to his receivers.

As Locksley flipped through the film, he reminded Tagovailoa of Maryland’s past tendencies on certain plays, which opposing teams will know. Locksley, who worked with quarterbacks and coordinated offenses before he became Maryland’s head coach, harped on decision-making with Tagovailoa, reminding him that he considers a misread the same as a bad pass. There’s no reason to hesitate once Tagovailoa spots the key — in this case, a defender’s shoulder. Later, Locksley told Tagovailoa, “If you attack the middle of the defense with your legs, it becomes an issue, especially if you put it on tape.”

And Locksley also asked what the quarterback had for dinner. Answer: Beef tacos with avocado.

Soon after, Locksley needed to step away for a quick recruiting call. Tagovailoa headed to the putting mat that separates Locksley’s desk from the sitting area in his office. Tagovailoa took a few putts, explaining how his brother got him into golf this summer but he’s not very good yet. As Locksley walked back in, he jokingly acted surprised to see Tagovailoa make a putt. The two returned to their seats, their focus again turning toward the screen.

Pep Hamilton, the offensive coordinator for the Houston Texans, sometimes calls Locksley during these film sessions. A few days prior, Hamilton had asked for Tagovailoa, who was at Buffalo Wild Wings with the offensive players and staff rather than watching film with Locksley. So on this night, Locksley called Hamilton via FaceTime, and the NFL coach offered encouragement to Taulia. Eventually, Locksley said he and Tagovailoa needed to get back to watching film.

Locksley thinks Tagovailoa is underappreciated within the national college football landscape. He said everyone tuned in for Maryland’s Friday night game against Iowa last year, and after they saw Tagovailoa collapse in the second quarter, throwing one interception after another, they formed their opinion about him.

With Dante Trader Jr., the Terps have a lacrosse star starting at safety

Those bad memories stick inside Tagovailoa’s mind, too. When he thinks back on that game, his eyes get wide, as if he’s experiencing the mistakes all over again. At Big Ten media days, a reporter asked about the lessons he took from throwing four interceptions against the Hawkeyes. Tagovailoa quickly offered a correction: It wasn’t four. He threw five.

At the end of last season, Tagovailoa explained why he’s so meticulous in his preparation and said he thinks he’s “kind of traumatized by the Northwestern game,” referring to his Maryland debut that featured 94 passing yards, no touchdowns and a lopsided loss. He doesn’t want to feel that way again.

“Everybody’s different,” Enos said, “but I do think that failure fuels work ethic.”

Even after great games, Tagovailoa comes into meetings with critiques of his performance, and he doesn’t want to be showered with praise. Tagovailoa is too hard on himself sometimes, Enos said, so the coach preaches to him: “Give yourself some grace, man. You’re not going to be perfect or play perfect.”

Enos, a longtime quarterbacks coach, said Tagovailoa is among the best he’s seen at the college level in terms of preparation. When Tagovailoa leaves Locksley’s office around 10:30 p.m., the coach mentions they’ll work on third-down situations and red-zone offense the next day at practice, so he should watch that film beforehand. Tagovailoa said he already had — that’s what he worked through with Jones earlier in the day.

In the quarterbacks group text, the players and Enos sign off messages with “JWMF,” which stands for Just Win Monday through Friday. Tagovailoa, Enos said, is a “living example” of the position group’s philosophy — the idea that they’ll win games based on their preparation during the week.

After a win, Tagovailoa feels a rush of joy. That’s why he does all this work. It’s to chase that moment.

“You put all your chips in during the week,” Tagovailoa said, and so far this season, it’s paid off each time.