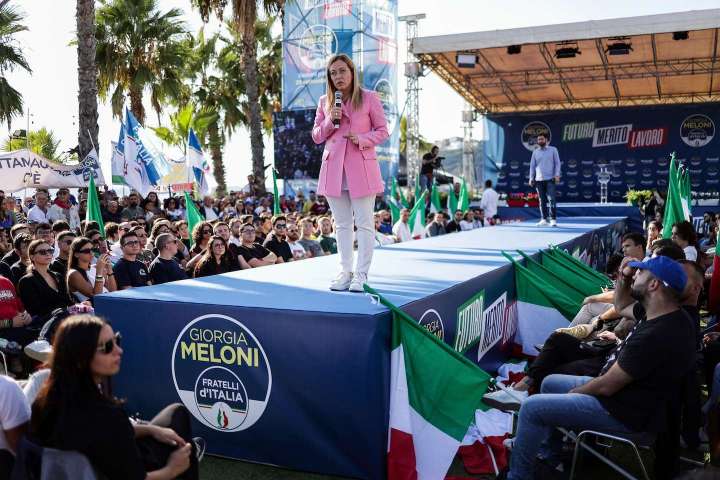 ROME — Italy is poised on Sunday for a norm-breaking election that’s expected to give the country its first-ever female prime minister — and its farthest-right government since the fall of Mussolini.

The vote is forecast to deliver victory to a coalition that includes two far-right forces, including the Fratelli d’Italia party of Giorgia Meloni, a once-marginal figure who vows to defend “traditional” social values, close off pathways to undocumented immigrants and push back against the “obscure bureaucrats” of Brussels.

While the rise of Meloni and the far right could ultimately turn into an epochal event in European politics — pushing Italy into an illiberal bloc with Poland and Hungary — it’s difficult for leaders to hold on to power in Rome, where zigzags are the norm, and the typical government lasts no more than 400 days. Meloni would face immediate tests at home and in Europe, given fatigue over soaring energy prices and divisions within her own coalition on Russia and its invasion of Ukraine.

The vote Sunday only fills the seats of parliament; the prime minister will be chosen later, indirectly. But if Fratelli d’Italia emerges with the most votes of any party in the fragmented system, it will give Meloni — a 45-year-old Roman who quotes pop songs and delights in bashing the “woke” left — the best shot at receiving the mandate from Italy’s president to form a government.

Skepticism about politics runs deep in a nation that has cycled through 11 governments in 20 years. Over that time, household wealth has scarcely improved. And mountainous national debt means any government, with missteps that scare investors, could edge toward a financial crisis. That would make for high stakes as Meloni began the job, as officials in other capitals watched to gauge her taste for disruption.

In her decade as leader of Fratelli d’Italia — Brothers of Italy — she has espoused some extreme positions. She’s advocated for the dissolution of the euro zone. She’s warned, conspiratorially, that unnamed forces are guiding immigrants en masse to Italy in the name of “ethnic substitution.”

But she has clearly tacked toward the center on some issues as her party widened its support. She says Italy belongs in Europe, but will fight for its interests. She promises to maintain Italy’s Atlantic alliances and says the country won’t take an authoritarian turn. In an interview with The Washington Post this month, she also pledged financial stability, and said “people abroad” would see her government’s seriousness “once we’ll present our first budget law.”

Her party’s rise is the culmination of a decades-long process of image rehabilitation — and moderation — of a political wing started by Mussolini loyalists soon after World War II. Fratelli d’Italia is a descendant of an earlier, more extreme post-fascist party. Meloni has said that the Italian right long ago handed fascism “to history,” but her opponents say that her party still includes some fascist sympathizers.

Italy’s right-wing parties, in banding together, have given themselves an overwhelming electoral advantage over the fragmented left, which failed, amid infighting, to create a comparable coalition. When polls were halted two weeks before the vote, a YouTrend projection showed the right-wing bloc commanding 45.9 percent of the support, compared with 28.5 for the center left and 13.2 for the amorphous, vaguely anti-establishment Five Star Movement. Some pollsters say the Five Stars have made progress since that point by arguing for the preservation of their signature welfare plan — a so-called citizens’ income that is popular in the south. Meloni opposes it.

Wolfango Piccoli, co-founder of the Teneo consultancy firm, noted that inroads made by the Five Stars, as well as the struggles of the far right League, make it unlikely that the right-wing bloc will win a two-thirds majority, one of its goals.

To visit polling stations across Rome on Sunday be reminded why Italy is so hard for anybody to lead. Italian voters, rather than cleaved neatly between left and right, are instead cut into countless little slices — each with their own narratives about the ills of the country. Ballots on Sunday had more than a dozen party logos on them, and even so, many voters said they weren’t particularly enthused about any of the options. Some turning out for Meloni said her party seemed the most clear-eyed — but even they had jumped to her party only recently, and weren’t sure she could retain her coherence in a coalition. Many others said they worried about how she might guide the country.

“I don’t think we’re going back to 1920, but that is the underlying inspiration,” said Rita Taggi, 59, a tax consultant.

On the campaign trail, the leader of Italy’s left-center party, Enrico Letta, argued that if Italians hand power to the right, they would be doing a favor for Russian President Vladimir Putin, who has tried increasingly to sow strife in Europe — primarily by withholding energy exports — as his invasion of Ukraine has faltered.

Though Meloni has consistently backed Ukraine, other figures in her coalition have shown affection for Putin. Matteo Salvini has worn a shirt with Putin’s face on it and in 2017 signed a cooperation deal with the ruling United Russia party; he recently questioned the effectiveness of sanctions. Silvio Berlusconi once gifted Putin a duvet cover of the two men shaking hands, and days ago he suggested, falsely, that Putin was merely responding to the popular will of his people when he invaded, and intended to replace the Zelensky government with “decent people.”

There are reasons, beyond Russia, that Europe is on edge about the outcome.

Within Meloni’s party there’s a deeply held sentiment that European integration should be limited, and that nations should be able to define themselves rather than taking directives from Brussels. That could in theory spark Italy to play a more obstructionist role on key issues such as migration or foreign affairs.

Any differences would be jarring because, for the last year-and-a-half, Italy has been led by Mario Draghi, a former central banker who helped save the euro zone from crisis a decade ago and has a sterling reputation in Brussels.

“It will be the first time that one of the big E.U. countries is under the mold of somebody who is not pro-Europe,” Letta told The Post.

Italy’s election will likely bring the far right to power. Here’s why.

On Thursday, European Commission President Ursula von der Leyen said Europe has the “tools” to contend with Italy if things go in a “difficult manner,” in an apparent reference to the proposed fund cuts aimed at Hungary over corruption.

Meloni would face natural constraints in Europe, given that many of the wealthy right-wing business interests in Italy prefer a stable relationship with Brussels. But she and her allies would have leeway on the issue of immigration. When Italy was led in 2018 and 2019 by a populist coalition that included Matteo Salvini’s League, the country routinely denied landing permission to boats that rescued undocumented immigrants from sinking dinghies in the Mediterranean.

For voters, though, immigration has receded as a hot-button topic, given the general decline in attempted crossings since a record wave seven years ago. Some of that decline is owed to controversial work, carried out by Italian governments on the left and right, to equip Libya’s coast guard with the resources to halt would-be immigrants before they get very far toward Europe.

Even if Italy’s electoral outcome is clear, it will take weeks until a prime minister is named — only after parliament is formally seated. At that point, Italian President Sergio Mattarella will begin consultations with the new parliamentary leaders and representatives from the parties, on forming a cabinet and selecting a prime minister.

Some pollsters have said that turnout could be even lower than the 73 percent level of 2018, which at the time marked a record low. The rapid turnover of governments — generally before leaders have time to follow through on promises — has amplified a sense of alienation. Twice in the last three years Italy staved off snap elections with backroom deals to form new coalitions, as parties shape-shifted, joined hands and then bickered with one another.

The last such deal brought about Draghi in a broad-based government that included every party but Fratelli d’Italia. While Draghi was personally popular, his coalition was undone when several parties withdrew their support.