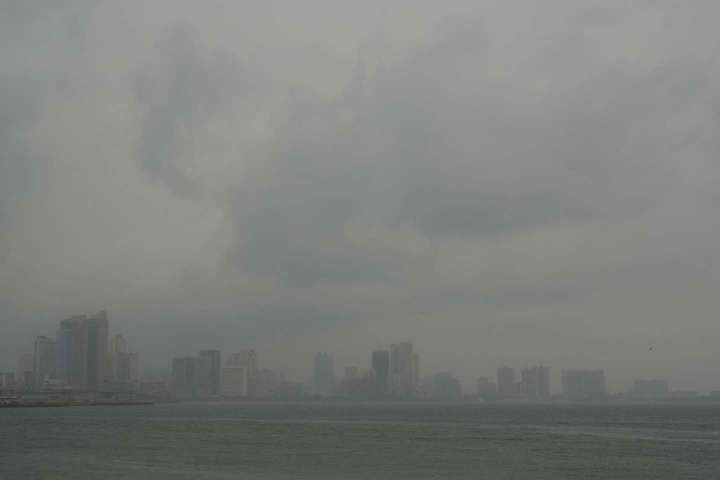 Emergency officials in the Philippines were on high alert Sunday as a rapidly intensifying tropical storm known as Super Typhoon Noru made landfall off the eastern shore of the capital, Manila, and made its way toward the main island.

Weather officials have warned of a potential “extreme threat” to life and property from Noru, also known locally as Super Typhoon Karding. The storm reached “super typhoon category after a period of explosive intensification,” they said. Super typhoons have peak winds of at least 150 mph.

Though the storm was expected to weaken into Monday as it crossed over the main island of Luzon, which includes Manila, and made landfall, the officials said it was “highly likely” to “remain a typhoon while crossing the landmass.”

As Noru approached the Philippines, its peak winds increased from 60 to 160 mph in 24 hours as it transformed from a tropical storm to the equivalent of a Category 5 hurricane. This leap was among the fastest 24-hour intensification rates on record for any tropical cyclone.

Scientists say human-caused climate change is increasing the potential for such rapid strengthening.

The undeniable link between weather disasters and climate change

Philippine President Ferdinand Marcos Jr. on Sunday canceled classes in public schools and closed down non-emergency government buildings in a bid to keep people indoors and out of the storm’s path, his office said on social media.

Local services were disrupted and dozens of international and domestic flights were canceled because of the weather, including a United Airlines flight to Guam, authorities said.

The U.S. Embassy rescheduled all consular appointments for Monday in Manila. Curtis S. Chin, former U.S. ambassador to the Asian Development Bank, said his thoughts were with those in the Philippines as he shared a visualization of the storm rapidly growing in strength between Saturday and Sunday.

The typhoon is forecast to bring large waves, torrential rains and wind gusts of up to about 127 mph to the northern island of Luzon — home to a population of more than 64 million people — over the next 24 hours.

“Under these conditions, scattered to widespread flooding and rain-induced landslides are expected, especially in areas that are highly or very highly susceptible to these hazards as identified in hazard maps and in localities with significant antecedent rainfall,” the Philippine Atmospheric, Geophysical and Astronomical Services Administration said.

At 5:30 p.m. local time on Sunday, the agency said the eye of the storm had made landfall near Burdeos, a municipal area in the Quezon province of Polillo Islands.

It forecast “a high to very high risk” of storm surges of about 10 feet or more in the low-lying and exposed coastal areas of northern Quezon, the Polillo Islands and Aurora. It said to expect “heavy to intense with at times torrential rains” through Monday morning over Metro Manila, which includes Quezon City, nearby provinces and the north of Quezon.

After crossing Luzon, Noru is forecast to emerge in the South China Sea and regain strength early this week before making a second landfall in central Vietnam.

Noru is one of many tropical storms to hit the Philippines this year. The capital and northern provinces are recovering from a cyclone last month that caused floods and landslides and killed three people, according to Reuters.

One of the strongest storms ever to hit Canada slammed into Nova Scotia’s coastline on Saturday, leaving much of Nova Scotia and nearly all of Prince Edward Island without power. Former hurricane Fiona is the lowest-pressure land-falling storm on record in Canada, according to the Canadian Hurricane Center, which also reported hurricane-force gusts battering the area.

Meanwhile, a tropical storm known as Ian churned through the central Caribbean, a journey that weather experts say could culminate in a collision with Florida on Thursday as a hurricane.