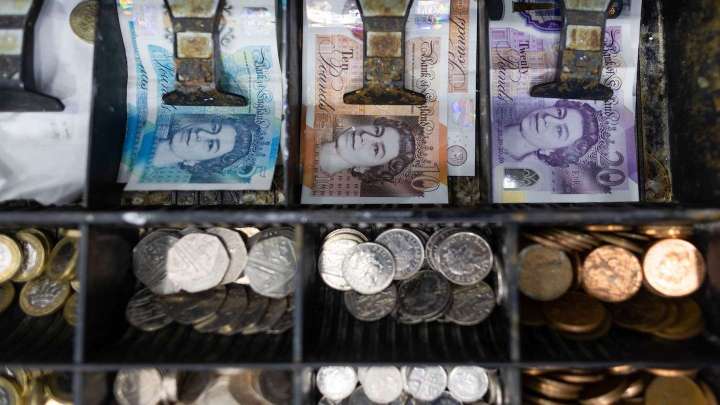 The pound’s slide comes as Britain grapples with a cost-of-living crisis and soaring public debt amid deteriorating investor confidence. It also raised the prospect that the Bank of England may intervene to shore up the pound.

The slump in part reflects the strength of the U.S. dollar, which has been boosted by higher interest rates. But it also has dropped against many other currencies, indicating specific concerns about the British economy.

Who is Liz Truss, the U.K.’s new prime minister?

The pound hit a record low of $1.03 in Asian trading early Monday, before regaining some ground and stabilizing around $1.08 — still well below where it was Friday morning before the government unveiled its “mini-budget.”

The slump comes as global markets falter and recession fears grow in many geographies. In the United States, the Federal Reserve raised interest rates last week in its ongoing push to subdue high inflation. It was the fifth rate hike of the year and the third consecutive one of three-quarters of a percentage point. That roiled Wall Street, and by Friday the Dow Jones industrial average had closed below 30,0000, to its lowest point since 2020.

“We have got to get inflation behind us,” Federal Reserve Chair Jerome H. Powell said last week. “I wish there were a painless way to do that. There isn’t.”

The major U.S. indexes were down in early afternoon trading Monday, with the Dow falling about 275 points, or 0.9 percent and the S&P 500 down 0.9 percent. The tech-heavy Nasdaq was off 0.3 percent.

The Bank of England said Monday that it was “monitoring developments in financial markets very closely in light of the significant repricing of financial assets.”

In a statement, the central bank said its monetary policy committee would make a “full assessment” of the impact of the government’s actions and the pound’s drop at its next meeting, which is scheduled for November.

“The MPC will not hesitate to change interest rates as necessary to return inflation to the 2% target sustainably in the medium term, in line with its remit,” it said.

The pound’s drop comes about two months after the euro reached parity with the dollar for the first time in nearly two decades. The war in Ukraine has disrupted food supplies and sent energy costs soaring around the world and especially in Europe. That, combined with the Fed’s raising interest rates, has made the dollar a comparatively safer bet for investors.

Mike Riddell, a senior fixed-income portfolio manager at Allianz Global Investors, said the pound’s decline is not “necessarily a symptom of European recession.” Rather, investors are starting to become skeptical of Britain’s ’s ability to fight inflation.

“The scary thing is that the global economy is yet to feel the impact of all the rates hikes we’ve seen around the world in the last few months, because it takes about a year for monetary policy changes to have an impact on the economy,” he said in an email.

A weaker currency, of course, does not necessarily reflect a weak economy. In many cases, it may be advantageous, for example making British exports cheaper for consumers in the United States — and so a weak pound will boost overseas sales for companies that are export-oriented. But it means that anything denominated in dollars, such as energy costs, will soar for consumers.

It is good news for American tourists in the United Kingdom, who suddenly find that their dollars are going much further. It is not good news for many British households, which already are facing soaring energy bills and inflation running at 10 percent. They will find that the costs of imported goods and services will go up, including everything from fuel for vehicles to food on plates — in 2020, Britain imported 46 percent of the food it consumed.

On Friday, Kwasi Kwarteng, the new chancellor of the exchequer, or finance minister, announced a package of tax cuts worth 45 billion pounds ($48 billion), the biggest shake-up to its tax system in 50 years. The top rate of 45 percent for income tax was slashed, the cap for banker bonuses will be scrapped, and taxes on house purchases were cut — moves that will predominantly help more-affluent citizens in hopes they will boost their spending.

While the new prime minister, Liz Truss, had pledged tax cuts during her leadership campaign, the scale of the cuts still shocked many economic observers.

“In the current economic environment it is a huge gamble,” wrote Thomas Pope, an economist with the Institute for Government. It is a major shift away from the policies of Truss’s predecessor, Boris Johnson, who last year had announced tax increases to help pay for combating the pandemic.

The new British government hopes that by slashing taxes and regulations, it will be able to generate growth that will help to fund public services and eventually pay down the debt.

“It’s a numbers game and their numbers don’t add up,” he said.

Investors are looking at where inflation is going and at Britain’s balance sheet.

“They are saying, ‘I don’t want to own U.K. paper because they are not playing responsibly,’” Hardy said.

Truss, who is just three weeks into her new job, has defended the tax-cutting bonanza.

In a recent interview, CNN’s Jake Tapper put it to Truss that British opposition parties are framing her plans as “recklessly running up the deficit” and that President Biden “is, in essence, saying your approach doesn’t work.”

Last week, Biden tweeted: “I am sick and tired of trickle-down economics. It has never worked.” He was referring to the supply-side economics made famous by President Ronald Reagan, which Truss’s approach resembles.

In the interview, Truss responded: “The U.K. has one of the lowest levels of debt in the G-7. But we have one of the highest levels of taxes. Currently, we have a 70-year high in our tax rates. And what I’m determined to do as prime minister, and what the chancellor is determined to do, is make sure we are incentivizing businesses to invest. And we’re also helping ordinary people with their taxes.”

Truss continued: “That’s why I don’t feel it’s right to have higher national insurance and higher corporation tax, because that will make it harder for us to attract the investment we need in the U.K. It will be harder to generate those new jobs.”

Rachel Lerman in Washington contributed to this report.