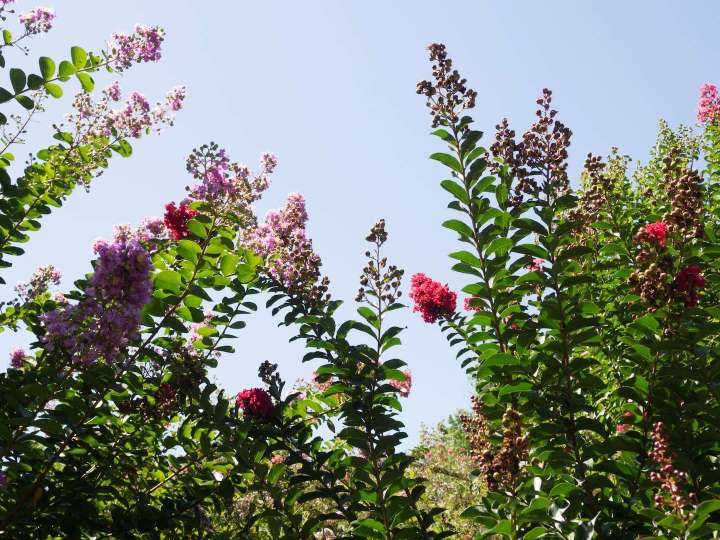 Q: Our crape myrtle got out of control, so we cut it down and had the stump dug up. Two years later, little shoots are appearing in the lawn, anywhere from a few inches to four feet away from the original location. We prefer to not use a herbicide. What can we do?

A: Trees didn’t get their status as the longest-living plants by making a promise to sprout only from a seed. Although some types of trees can live for hundreds, even thousands, of years supported by a single trunk, many kinds also create clones by sending up suckers from their roots. These suckers can form while the original trunk is alive, as well as long after it disappears, as you’ve discovered. When suckers are left to grow, they eventually get wide and tall enough to look like full-fledged trees.

But it’s one thing to delight in the rustling gold leaves of a grove of quaking aspens that grew from suckers in a national forest — and something entirely different to see baby trees popping up in a lawn or flower bed. You can leave a sucker to grow if you want a new crape myrtle tree in that location. Otherwise, the easiest solution is to pull or clip the suckers as they emerge. If they are short and young, you might be able to yank them out by hand; they often snap off from the roots at this stage. If they grow taller and develop thicker stems, though, you’ll need to use clippers. Clipping suckers above the soil can leave spikes that are hard on feet. Also, stubs can sprout into a new cluster of suckers, which means it doesn’t work well just to mow them down. Clip below the soil surface — ideally, where the sucker connects to the root. If you want to keep your clippers clean, or if your soil has pebbles and you don’t want to dull the blade, use a trowel to clear away a little of the soil first, make the cut, then fill in the divot you made.

A crape myrtle tree lacks a taproot; instead, it has fibrous roots 10 to 12 inches deep. So, if you’re willing to re-landscape a chunk of your lot, it might be possible to remove the roots and eliminate the problem permanently. Be prepared for a lot of digging, though: The roots of a crape myrtle can extend two or three times as far as the branches once reached.

Because the prospect of having to repeatedly remove suckers is so annoying and the alternative of digging out the roots is so daunting, a chemical solution might seem an appealing alternative. Yes, it is possible to use a herbicide to help keep new suckers from forming. But it isn’t a permanent solution: New suckers will still form, just not so fast. Products such as Monterey Sucker-Stopper RTU ($51.99 for a 16-ounce spray bottle on Amazon) and Bonide Sucker Punch ($21.99 for an eight-ounce bottle with a brush applicator under the lid) contain ethyl 1-naphthaleneacetate, a growth regulator that stops suckers from sprouting from roots and pruning wounds for up to six months. To use on root suckers from crape myrtle and other ornamental woody plants, apply Sucker-Stopper when sprouts are no more than 10 inches tall, according to the label. Wear goggles, gloves and clothing that will prevent any of the product from getting in your eyes or on your skin. The instructions also say to apply the herbicide just to the suckers, not to the soil or other nearby plants. With a spray, that might be hard to accomplish. You might want to try brushing it on with a small, disposable brush.

crape myrtles aren’t the only trees known for producing lots of suckers and sprouts. The label for Sucker-Stopper also lists its usefulness on 15 other kinds of ornamental trees, including elms, carob, flowering plums and several kinds of maples, as well as apples, pears and olives. When suckers are a problem near a tree that someone wants to keep, proper pruning can go a long way toward reducing the sucker problem, because suckers are most likely to form when a tree is under stress. Overpruning does that.

Although it’s certainly possible to leave a sucker or two to grow where you want a new tree, if the original tree was grafted, as fruit trees often are, the suckers will be the variety used for the root stock. Tree nurseries often graft buds that will grow into branches yielding good-tasting fruit onto root stock selected for a different purpose, such as the size that the tree will eventually grow to. Suckers of these trees will not produce the same kind of fruit and will probably be disappointing.