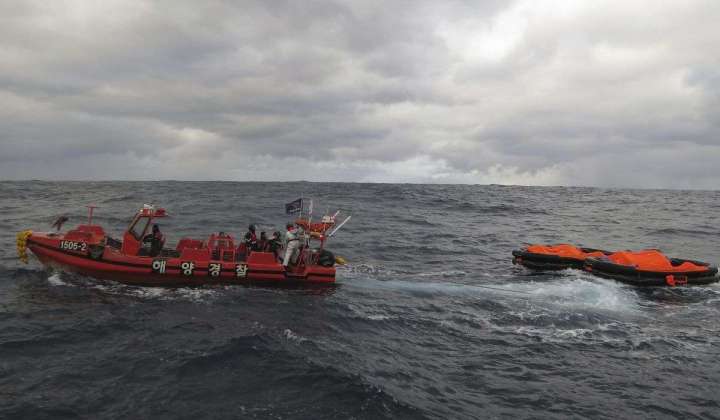 SEOUL, South Korea (AP) — South Korean and Japanese coast guards were searching for 17 crewmembers of a cargo ship that sank early Wednesday while transporting lumber in waters between South Korea and Japan.

The coast guard of the southern South Korean island of Jeju said five crewmembers were rescued by nearby vessels after the 6,551-ton Jin Tian sank about 150 kilometers (93 miles) south of the island and inside Japan’s exclusive economic zone.

South Korean and Japanese officials said 14 crewmembers on the Hong Kong-registered ship are Chinese and eight are from Myanmar.

Shinya Kitahara, spokesperson of Japan Coast Guard, said the ship sank nearly four hours after sending a distress call at around 11:15 p.m. Tuesday. According to Jeju island’s coast guard officials, the ship’s captain last communicated with the coast guard through a satellite phone at around 2:41 a.m., saying that crewmembers would abandon the ship.

No one was found in the three life rafts and two lifeboats searched by South Korean coast guard crews who later arrived on a speedboat.

Kitahara, who confirmed the rescue of at least four crewmembers, said the cause of the ship’s sinking was not immediately known and that there were no signs that it collided with another vessel. He said Japan dispatched patrol boats and aircraft to the area, but their arrivals were delayed by rough weather.

Strong wind warnings have been issued at the site of the sinking, which is about 160 kilometers (100 miles) southwest of the Japanese city of Nagasaki.