Even in a pandemic and with a World Series ring, Mike Rizzo gets strung along by the Nats 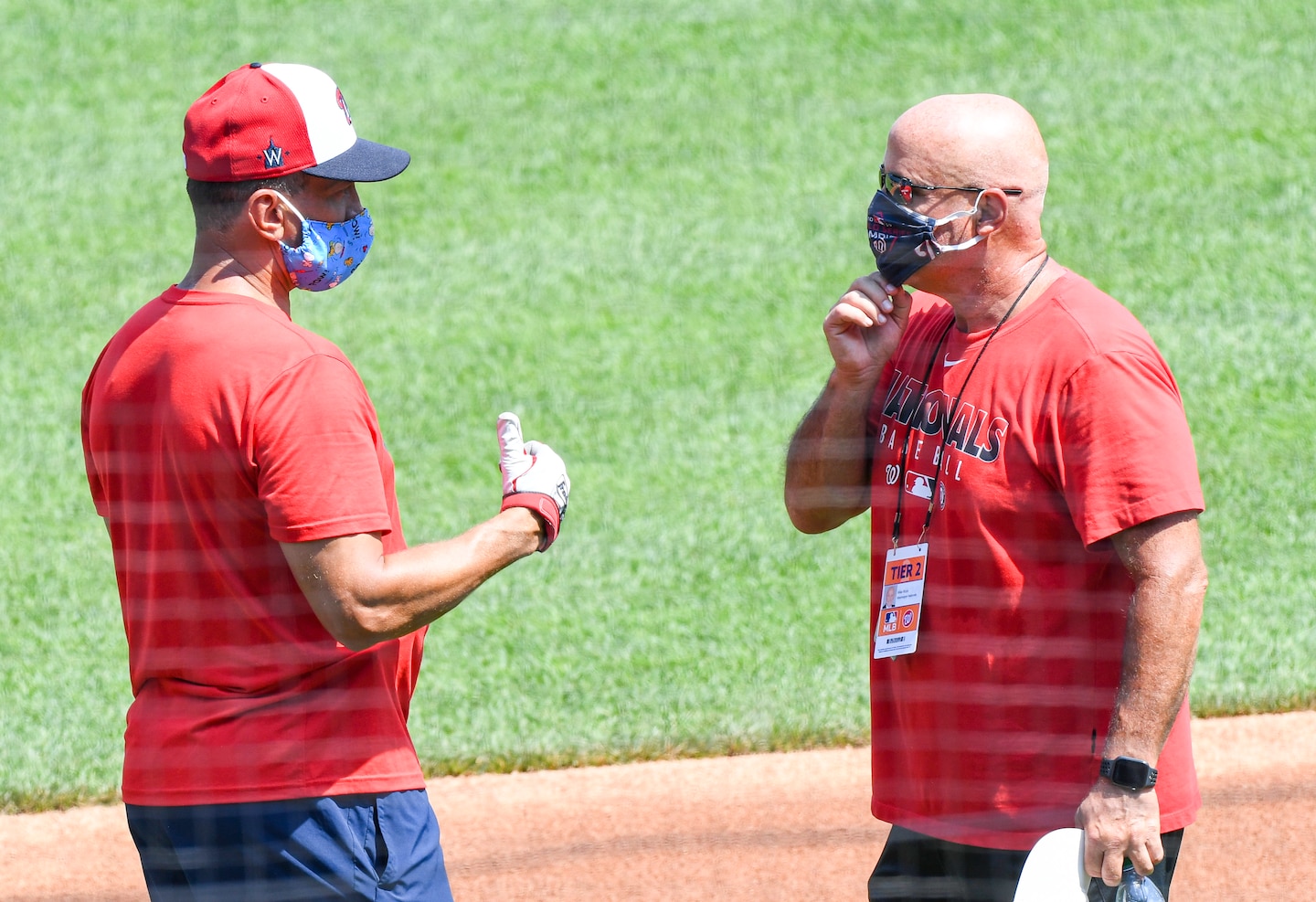 And then he went back to work. How long he’ll have that opportunity, who’s to say?

As baseball tries to return — albeit in fits and starts thus far, with players voicing health and safety concerns every day and lags in test results canceling workouts — there are Moby Dick-sized fish to fry not just for the Nats, but across the sport.

But if baseball is going to return, then the business of baseball must, too. It might seem minor. It can’t be avoided. And thus, part of that business has to be determining who will run the Nationals — the World Series champion Nationals — next year and beyond.

That we’re talking about this as coronavirus cases across the nation continue to spike is absurd, and it clearly didn’t have to be this way. Rizzo has been the Nationals’ general manager since 2009, and four years later he was promoted to president of baseball operations while keeping his old title, too. And if it feels like every two years — or shoot, now, every few months — you read a version of this column, it’s because you do.

Rizzo’s current deal runs through Oct. 31. Which is ridiculous. I certainly get that the sport’s three-and-a-half-month shutdown in the wake of the coronavirus pandemic was no time to talk about employee contracts. But whatever the wisdom, the sport is trying to start up again, and the man who is the face of the franchise’s attempt to do that — who canceled workouts Monday because his players and staff didn’t have virus test results yet — is guaranteed just three-and-a-half more months of work?

I have written this column so many times, I’m worried I’m going to plagiarize myself. So let’s pick the words carefully.

It’s clear, by now, that no amount of public pressure or fan head-scratching is going to change the ways the Lerner family, which has owned the Nationals since 2006, does business. All those years ago, I figured the family would learn the business of baseball and adapt to how those inside it work. I couldn’t have been more naive. Ted Lerner — and by extension his son Mark, who now runs the club — didn’t become a billionaire by worrying about outside nitpicking, and he doesn’t run his businesses on the beliefs of others.

That’s fine, even smart. But it’s impossible to deny that creating this kind of uncertainty — indeed, fostering it, as if to remind people exactly who’s in charge here — creates an uneasiness for the entire staff. There are plenty of Rizzo’s lieutenants who have contracts that expire at the same time his does. If the boss isn’t signed for the future, what future do they have? This is kitchen table stuff, because people have homes and families and careers to think about.

Add that dynamic to the challenges of preparing a team for a shortened season while allaying concerns about health and safety, and how can anyone focus on going from first to third on a single or getting a good jump on a ball in the outfield or beating the New York Yankees on July 23? The working environment is already compromised by the virus. For some in the Nats’ front office, it’s further compromised by not knowing their status, because they don’t know the status of their boss.

Whether Rizzo feels hindered by all this, I have no idea. He hasn’t answered messages on the topic, and because there’s no contact between reporters and baseball staff during workouts at Nationals Park, I can’t ambush him in person.

Through a spokesperson, the Lerners declined to comment on Rizzo’s contract this week. They could have said, “We have confidence in Mike’s leadership and expect him to be a part of our club for years to come.” They did not.

Does this delay — not through the virus shutdown, but in the early part of the offseason, back when this should have been taken care of — mean Rizzo’s future is in doubt? Stranger things have happened, but I can’t imagine it. There are plenty of people in baseball, and some in the Washington organization, who believe the Lerners would have let Rizzo go had the Nats not won the World Series — or at least made a deep playoff run — in October.

But guess what? The Nats did win the World Series in October. And the executive who assembled the roster, front office and coaching staff that pulled it off is now a lame duck. Again. Add on the normal list of items that pad out Rizzo’s résumé — since 2012, only the Los Angeles Dodgers have more regular season wins than Washington, and only the Dodgers have more than the Nats’ five postseason appearances — and it just seems a mean-spirited way to do business, stringing along the general manager who helped make that happen.

Forget, though, how that looks to the Lerners. How does it look around baseball? It may well be that, for whatever reason, the family would like to move on from Rizzo. That would be their prerogative. It’s their business.

But to the rest of the industry, the message would be: The guy who built the organization that turned the franchise from a laughingstock and an afterthought into a perennial contender that eventually broke through and won the whole darn thing, you let his contract peter out before turning to someone new? That someone new, whoever it might be, would have to have some serious questions for their prospective bosses, starting with, “How do you value and care for the people who work for you?”

Mike Rizzo is 59, and on those endless days all those years ago when he was driving across the country as an area scout, he likely couldn’t have imagined a time when he was making $4 million to run a World Series champion. That’s what he is now. In a normal world in which he worked for a normal club, he would already have a new contract that included a raise.

Baseball trying to restart in the midst of rising coronavirus cases makes this world decidedly not normal. It’s crystal clear that Rizzo does not work for a normal club. Not addressing the situation isn’t fair to Rizzo, and it’d be hard to find someone who thinks it is. But think of it more broadly: What does the situation of Mike Rizzo — the World Series-winning GM last October with no guarantee beyond this October — say to the rest of baseball about the Nationals and how they treat their people?