Pakistan has flattened its coronavirus curve, but officials fear upcoming holiday could lead to spike 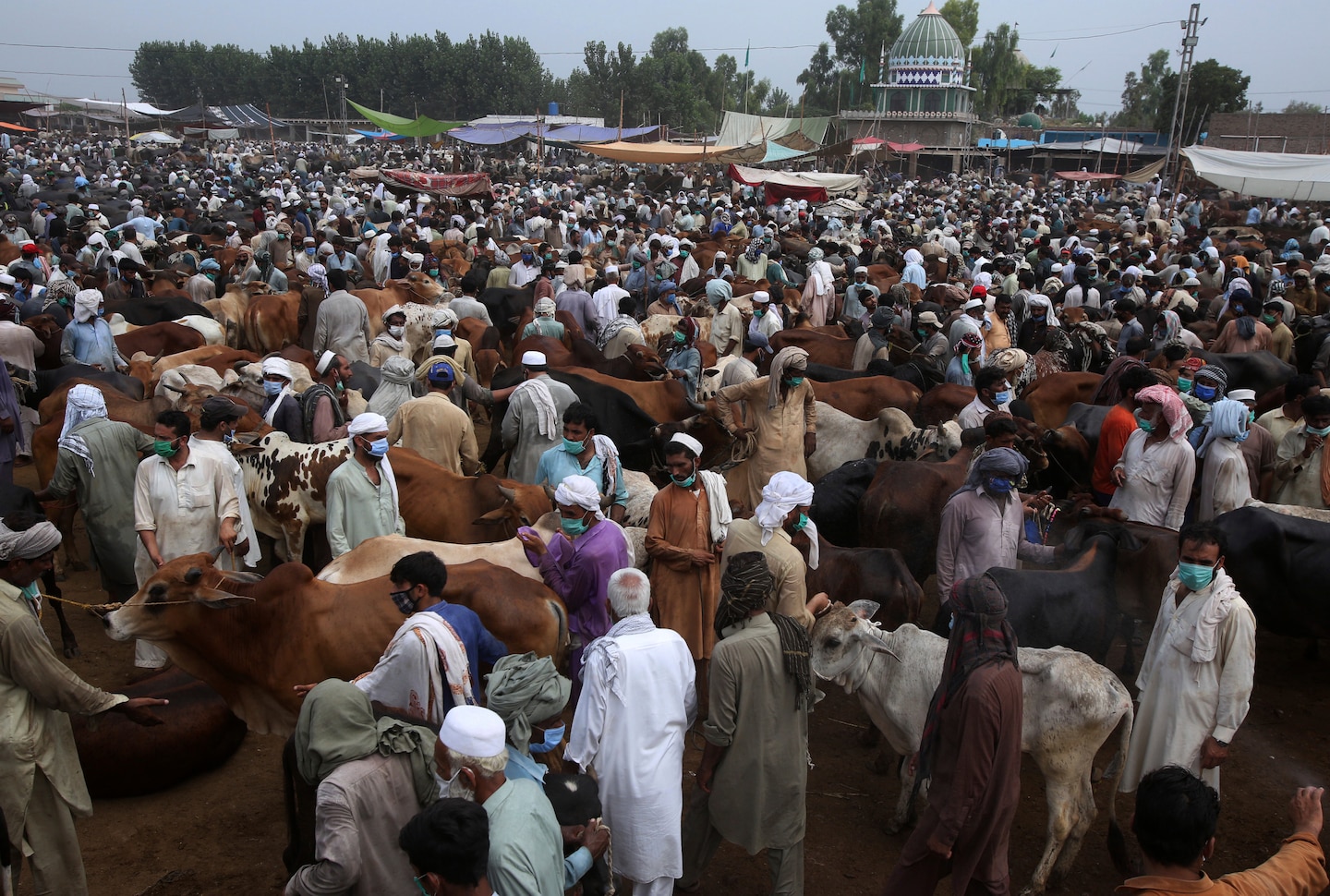 Within weeks, the price of this relaxation had become starkly clear: Cases of the coronavirus soared in the impoverished Muslim-majority nation of 230 million, and hospitals were overwhelmed. By June, infections reached 6,000 per day, and some days saw nearly 150 deaths. Overall, more than 260,000 Pakistanis have become infected, over 200,000 have recovered, and more than 5,500 have died.

A sterner official attitude now prevails. Prime Minister Imran Khan, while reluctant to impose a nationwide lockdown, initiated a policy of two-week “hot spot” lockdowns in hundreds of communities where the virus had spiked. Khan also asked the military to assist in the fight, and its involvement in logistics, security and surveillance helped to flatten the coronavirus curve. The past several weeks have seen fewer than 2,200 new cases and 70 deaths on an average day.

But nobody in the government is breathing a sigh of relief. Two weeks from now, the nation will celebrate Eid al-Adha, a different Muslim holiday of sacrifice, which draws millions to crowded livestock fairs, shopping bazaars, mosques, family gatherings and ritual animal slaughtering.

With public fears of the virus ebbing, officials worry that people will abandon masks and social distancing and rush into crowded holiday settings. And with the economy badly damaged and provincial governments imposing repeated closures of restaurants, wedding halls and entertainment venues, many Pakistanis are also desperate to get back to work and business.

“I urge the nation to continue observing [precautions] essential to sustain our positive trend. Eid ul Azha must be celebrated with simplicity so as not to repeat what happened last Eid,” Khan said in tweets Friday, using an alternate spelling for Eid al-Adha.

At that time, he said, health precautions were “ignored & our hospitals were choked.” Now, he said, he was ordering “strict implementation” of the rules.

In addition to reminding people to keep wearing masks and maintaining distance from one another, the government has issued new instructions on holiday behavior, such as avoiding the custom of greeting friends and relatives with an “Eid embrace.” It has issued separate rules for visiting the muddy markets where people buy and sell goats, sheep and cows for religious sacrifice. Sellers are being urged to arrange online purchases when possible.

“Any carelessness in observance of precautionary measures during Eid-ul-Azha may lead to a fresh spike in coronavirus cases,” warned Asad Umar, a civilian official heading the government’s effort to curb the spread of the coronavirus. Critics have attributed the lower infection rate to reduced testing, but Umar said greater public cooperation had led to a significant drop in the number of positive test results.

The involvement of the military has added manpower and authority to the effort. Under a joint command center, army and civilian leaders meet regularly. Soldiers help enforce local lockdowns, and the army-run Inter-Services Intelligence agency is using surveillance to improve contact-tracing efforts.

The power of tradition also remains strong, however, and every important feature of Eid al-Adha involves events with dense human mingling. The highlight of the holiday is the ritual slaughter of livestock, often in people’s yards, as sacrificial offerings to God.

The riskiest sites are the informal livestock markets, set up near urban areas before every Eid. Thousands of buyers wander among makeshift corrals and stalls, inspecting animals for lameness and counting their teeth to make sure they are old enough for a sacrifice that will please God. The fairs are also a critical source of income for farmers, who can earn several thousand dollars for a pretty cow or sturdy bull.

On Thursday, as the markets were beginning to open, sellers and visitors expressed a confused mix of opinions about the virus, weighing both religious sentiment and economic need against health concerns. At several near Islamabad and in the northwest Khyber Pakhtunkhwa province, less than half of visitors and very few sellers were wearing masks.

“I think this coronavirus is mostly hype and is not as dangerous as they say,” said Safdar Gul, 24, standing next to several bleating goats he had brought to Islamabad from 200 miles away. “It has ruined our business. Thank God that with Eid coming, people are starting to buy again. It’s only a few days, but I think we will be able to make up for some of our loss.”

Another animal trader, Musa Javed, said he had stopped wearing a mask after neighbors laughed and called him a coward. “I still try to wash my hands, but it is hard to stay clean in this work. Now we hear the corona cases are less. People will visit each other for Eid and the disease might spread, but no one cares,” Javed said. “Everyone is more worried about their business.”

The other high-risk venue for the virus to spread is in the urban bazaars where families are expected to flock this week to browse and bargain in clothing and jewelry stores. In large cities such as Rawalpindi and Karachi, narrow alleys of shops tend to quickly fill with customers. After weeks of being cooped up at home in quarantine, many people said they were looking forward to Eid shopping.

“How long can one stay inside? It was like a prison,” said Tahir Zaman, 46, a cement contractor, whose family spent three months at home but is now venturing out to markets. “We believe that God will protect us, but we also wear masks and keep sanitizers in the car. The peak of the disease seems to be over now. I have a cousin and an aunt who became infected and recovered. The government is worried about a rise in cases, but I think we’ll be fine.”

On Friday, many mosques were filled for weekly prayers, with some worshipers observing health guidelines but others not bothering. After one prayer service in Islamabad, a shopkeeper named Mazhar Iqbal, 43, said he planned to keep wearing his mask even though many people believe the pandemic “is about to end.”

“People are getting careless now,” Iqbal said. “I have a sign on my shop that says, ‘no mask, no service,’ but people still enter without them, and sometimes it leads to arguments. I am happy the virus is almost over, but with people losing interest in safety measures, especially during Eid, I fear it could become a big problem again.”