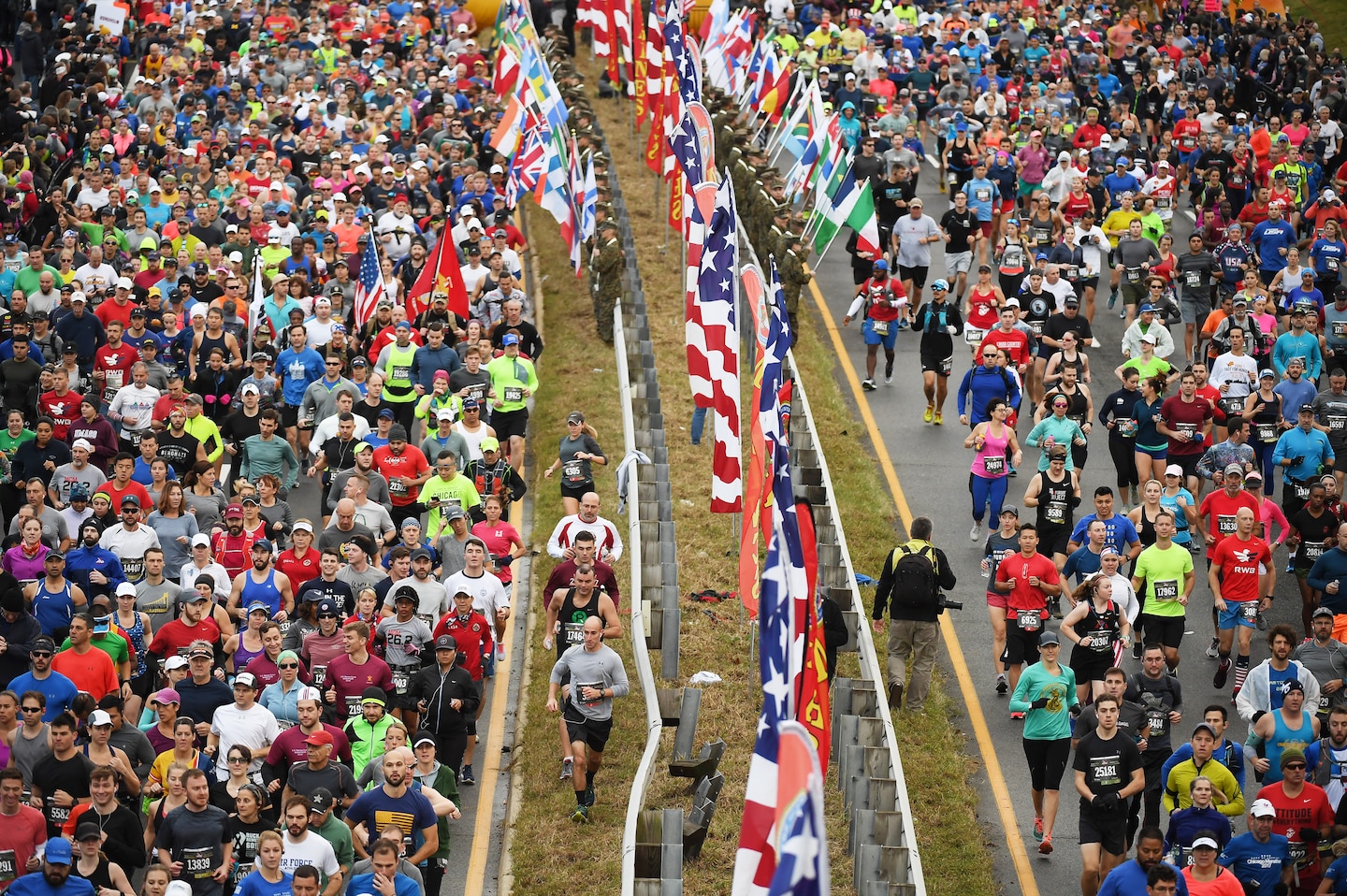 Nealis said the final decision was made Friday by Marine Corps Commandant David H. Berger after it became clear that key logistics could not be nailed down until uncomfortably close to race day.

The official announcement was posted Monday on the race’s website and social media accounts, where early comments were mostly positive.

“We explored various approaches to safely execute a live event and held numerous meetings with Marine Corps leadership, local government and public health officials,” the statement read. “We understand this is disappointing news for many, but we could no longer envision a way to gather together in compliance with safety guidelines.”

Thirty-five-time finisher George Banker, 70, author of a 2007 book about the race’s history, said the decision was the right call.

The Marine Corps Marathon had been one of the last mega-marathons remaining on the country’s 2020 race calendar.

Boston, which had been held every year since 1897, first rescheduled to September but then canceled entirely in May. New York City dropped in June, and Chicago threw in the towel last week. The only huge marathon left is Honolulu, which (so far) is still on for Dec. 13.

Nealis said runners can opt for a full refund of their entry fees, which for most was about $172, or they can defer with no fee to 2021, 2022 or 2023. Any runners who had previously paid to defer will have that fee refunded as well.

And runners who still want 2020 swag, including the medal, shirt and commemorative face mask, will have the option of running a virtual marathon for $45 after their original fee is refunded.

“I don’t know what more we could do for the runner,” Nealis said. Race cancellations rarely resulted in full refunds before the pandemic, but many races with the financial wherewithal to manage it have offered them this year as a gesture of support to disappointed runners.

The Marine Corps Marathon debuted in 1976 as a post-Vietnam recruiting tool and showcase of military goodwill.

It grew into a huge event, with an accompanying 10K, 50K and kids’ run, that annually draws 30,000 runners to the Washington area from all over the world — often with families and friends in tow. A Towson University study after the 2013 race found that runners pumped $88 million into the local economy on race weekend.

The threat of cancellation loomed over previous editions of the race.

But Nealis said that the closest call was in 2001, when the race was set for six weeks after the Sept. 11 terrorist attacks.

Rather than shutting down, as some other large events had done, the Marines marshaled loads of extra security, and the marathon became a moving demonstration of strength and healing.

Haunting photos captured runners — some carrying flags, some stopping to salute, some kneeling on the asphalt to pray — passing within yards of the monstrous gash in the side of the Pentagon.

“Our Marine instinct is to lean in and fight for the possibility of hosting a live marathon,” he said in a letter to runners the next day.

But in July, the virus’s spread accelerated in state after state, and the uncertainty of what would be feasible in October became too great.

The marathon’s logistics are a uniquely delicate dance even in a normal year: Dozens of agencies and law enforcement jurisdictions have to cooperate to stage it on and around some of the planet’s most security-conscious ground in the District and Arlington.

One of the largest unknowns was whether the race would be allowed on D.C. streets. Mayor Muriel E. Bowser (D) said last week she will extend the District’s state-of-emergency order into October. Much of the normal prerace preparation, such as multiagency law enforcement drills, couldn’t happen in the meantime.

“It became apparent that any of the planning that we normally would be doing and discussing, such as the safety and security issues, was not going to be conducted until and unless they changed the status,” Nealis said. “And so two weeks out before the Marine Corps Marathon, to do security and safety issues? You can’t do that. There are too many risks.”

So the Marines decided to cancel now, giving runners plenty of time to alter travel and training and perhaps run the virtual version.

That’s the option Banker plans to take. He has run the race more times than all but 16 people, and he hopes to move up a spot or two on the list by notching another official finish running solo. He said a silver lining is that those running it virtually have no time pressure.

“All these people who have never run a marathon, now they can say, ‘Hey, I did it — who cares about the time?’ ” Banker said. “I just have to do it in a day. I can go walk half of it, take a break, have my lunch, start the watch and pick right back up! Why not?”

The cancellation leaves Nealis, who plans to retire after next year’s race, wondering what he will find to do in September and October.

“All of a sudden, I’ve got time on my hands,” he said Friday, shortly after Berger made the decision. “In a couple of hours, I will go home and sit on the deck and sweat and have an adult beverage and reflect on what’s happening.