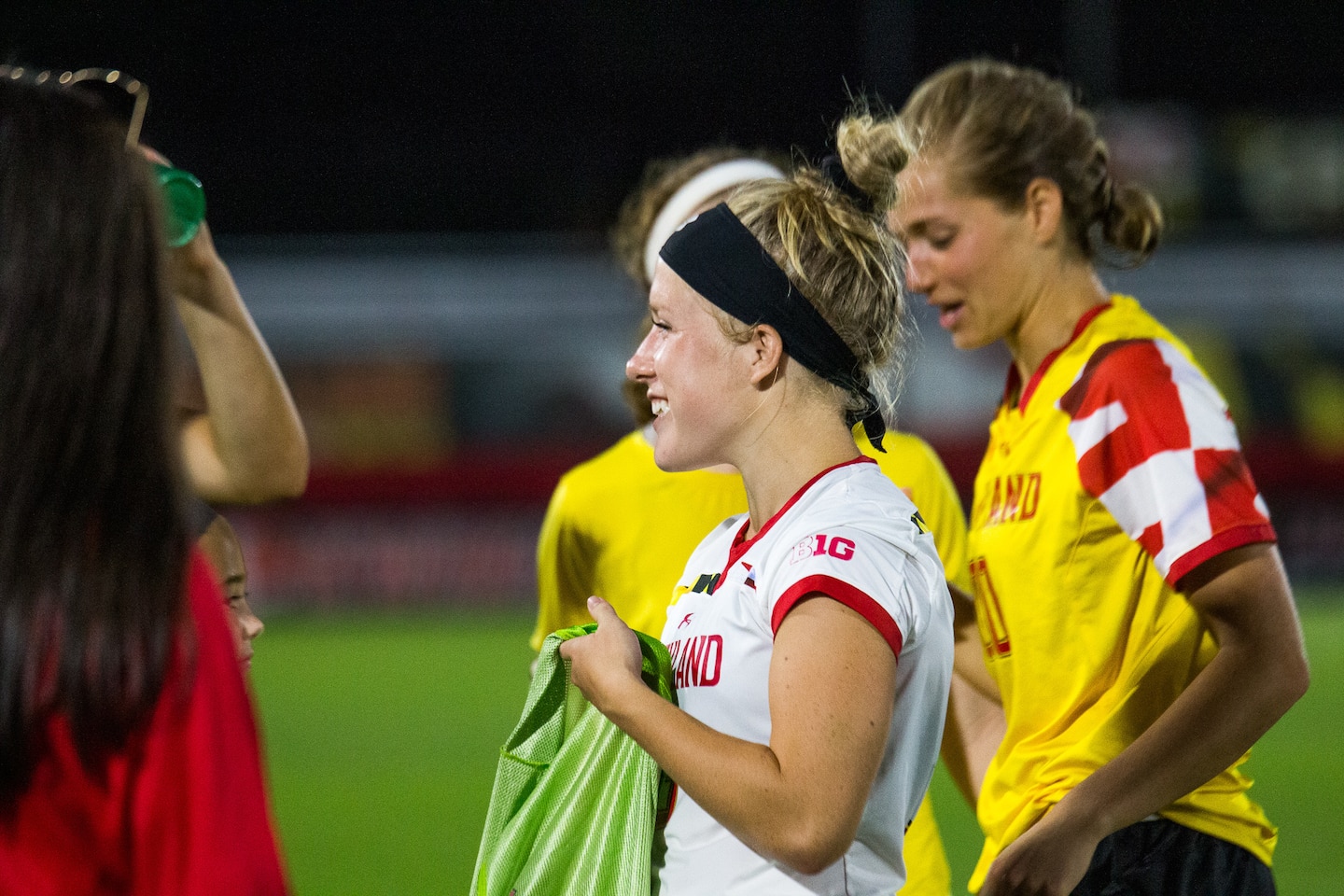 Lewandoski’s twin sister, Hannah, also attends Maryland, and they live together. Last year, Hannah told her sister she would help her with the forms. They requested ballots for a local election and sent them back to Ohio.

“She was really the one who dragged me into it,” Hope Lewandoski said. “But I’m glad now that she did it, because she got me passionate about it as well.”

Months later, not long after George Floyd died in police custody in Minneapolis, the Terrapins women’s soccer team held a long team meeting, led by Lewandoski and another senior. They discussed social justice and ways to help. Lewandoski mentioned voting and told her teammates that it’s one of the simplest avenues to spark meaningful change.

Lewandoski is now part of a new athletic department initiative called VoTERP, a nonpartisan campaign aimed toward educating Maryland athletes and staff about the voting process. She is joined by softball player Taylor Wilson and track and field athlete Julia Reicin, who is the director of the Student-Athlete Advisory Committee.

The committee stretches across the athletic department with about 30 people who volunteered to take part, including field hockey coach Missy Meharg; staffers from the football, men’s basketball and women’s basketball teams; and others from departments such as nutrition and marketing.

A few months ago, through conversations about racial justice, the idea of a voting initiative arose from staffers, coaches and athletes. Athletic Director Damon Evans told the staff if anyone was interested in helping, they could email Sue Sherburne, the department’s senior woman administrator and a senior associate athletic director. A couple dozen staff members reached out. Sherburne held onto those names and then formed this committee that the school officially launched Thursday.

“This is, to me, one of the many things that we can do outside of just playing sports,” Evans said. “This is an opportunity to help develop young people.”

The mission of the group aligns with the Big Ten’s voter registration initiative. In June, the NCAA’s Board of Governors said in a statement that the organization encouraged schools to help their athletes register to vote and designate Nov. 3 as a day off athletics activity.

“Voting on that day is important, and we’re going to give our student-athletes the time to do so,” Evans said while also noting a blanket decision for a day off might not be feasible if some teams compete that day.

Maryland’s VoTERP committee meets as a group every couple of weeks, and its three subcommittees — education, activation and branding — meet about once a week.

The group surveyed Maryland athletes to gauge what resources would be most beneficial. About three-quarters of the athletes who are U.S. citizens were registered to vote. Of those who weren’t registered, nearly half said that was because they didn’t know how. The survey asked what the athletes wanted to learn more about. The top responses were political topics and the process of voting absentee or by mail.

“These issues are important to our student-athletes,” Evans said. “We’ve got to make sure we’re supporting them and educating them in nonpartisan ways to understand everything that’s going on.”

Lewandoski is part of the education subcommittee, and the Big Ten has outlined topics that schools can cover each month. Lewandoski and the others are gathering information about why a person’s vote matters, and they’re deciding the best way to disseminate that to their audience. She said they don’t want to overwhelm athletes with too much information, but they’re thinking about using social media posts and emailed infographics to educate their peers.

Because of the age range of college athletes, many have never voted in a presidential election. This initiative will help guide athletes in their effort to become informed.

Lewandoski has talked with a leader from the school’s Student Government Association, which already has a voting initiative, so the groups can share resources and collaborate on events. While VoTERP is targeted toward those inside the athletic department, Sherburne said the goal is that the athletes can share what they learn within their communities and at home.

“It helps us grow our identities outside of being athletes,” Lewandoski said. “I feel like especially when you go to college, you’re so surrounded by your sport, you’re so involved in it, and your life is consumed by it. And sometimes our voice gets lost in other things and we’re solely focused on being an athlete.”

In an ideal scenario, Lewandoski said, every athlete at Maryland would vote in the upcoming general election. She knows that’s not a reasonable goal, but maybe everyone will at least gain understanding about why voting matters and how the process works. She said many athletes care about issues related to social justice, but they don’t always know where to channel that emotion.

“I feel like we have a lot more power than we realize,” Lewandoski said. “So I think that’s something I’m passionate about — letting kids our age know you have the power to do a lot of good things. It’s there. You just have to go and take it.”