On Opening Day, baseball’s return is nothing short of a miracle 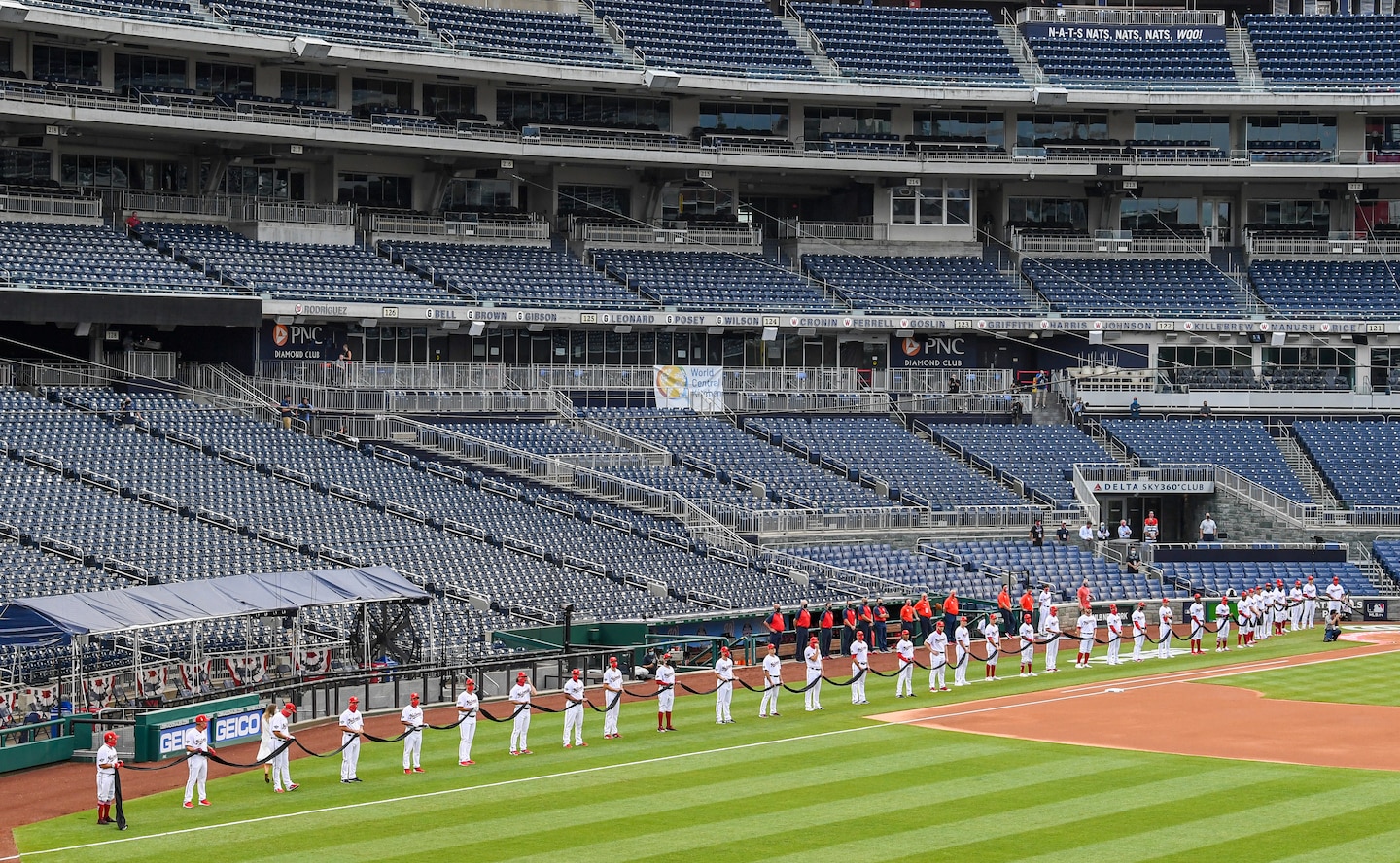 In a century and a half of baseball history, there had never been a game that looked, sounded or felt like the one played Thursday night alongside South Capitol Street. It was baseball in the age of coronavirus: devoid of fans, governed by a detailed list of safety protocols — no spitting! — and played to a soundtrack of canned crowd noise piped in over the loudspeakers.

By that math, the Nationals’ 4-1 loss to the Yankees on Thursday night — a game called because of rain in the top of the sixth inning — was 2.7 times more costly than in a normal year. Scherzer, who started the Nationals’ clinching Game 7 of the World Series in Houston last October, gave up a two-run homer to Yankees slugger Giancarlo Stanton and was outpitched by Gerrit Cole, the Yankees’ new ace.

There were so many layers of story lines to peel back before there could be baseball Thursday night — each one worthy of its own epic retelling — that, at times, the 2020 Nationals seemed like bit players in their own command performance.

There was a pregame ceremony highlighting the Black Lives Matter movement and the fight for social justice, with players from both teams lined up alongside their respective base lines, spaced apart in a show of social distancing, each of them holding a long, snaking black cloth that stretched almost from one foul pole to the other. During a moment of silence, all uniformed personnel on both teams dropped to one knee, then everyone rose again for the recorded playing of the national anthem.

There was the cringeworthy ceremonial offering from Anthony S. Fauci — so low and so far outside, Nationals pitcher Sean Doolittle, crouched in a catcher’s position to receive it, could only jump to his feet and jog after it as it rolled toward the backstop.

It was also, not least of all, the long-awaited night the Nationals would celebrate their 2019 World Series title — a moment they expected to come back in April, for their original home opener, before the coronavirus shut down the sport for four months. The Nationals would have preferred to have raised their flag in front of a full house, their fans roaring as the championship flag went up.

But this year, everyone is learning to do without, and if there is a question still lingering one night into the season, it’s how much doing without can be done before baseball loses its essence.

Everybody did their level best to pretend — or to manufacture excitement and adrenaline where none was coming naturally. Public address announcer Jerome Hruska drew out the names of each Nationals player during pregame introductions — “HowiEEEEEEEEE Kendrick!” — but in the pauses, where there would be roars from the crowd, there was only fanfare music and the faint hum of canned cheering.

Small throngs of fans dotted the rooftops of the distant apartment buildings and hotels beyond the fences. But otherwise, there was no one watching who wasn’t a media member or someone affiliated with either team.

For the few who were there Thursday night, baseball had never sounded so pure and uncluttered. Scherzer’s trademark grunts were audible above the canned noise. Every “I got it!” from every infielder rang out. Every thwack of bat meeting ball sounded like a thunderclap. Foul balls crashed into plastic seats and rattled around — then sat there until someone thought to retrieve them.

This entire season is a miracle of human ingenuity — requiring an economic restructuring, a 113-page operations manual detailing the health and safety protocols, the buy-in of 900 players whose health is at risk each day and the willful suspension of disbelief. Reminders of the fragility of the endeavor were everywhere.

Baseball has seen a dozen or so players opt out of playing and at least 80 others test positive since players began arriving at training camps in late June. The Toronto Blue Jays are still trying to figure out where to play home game, after the Canadian government effectively booted them. The American Sun Belt, including states that are home to more than a third of all major league teams, is seeing surging caseloads of the coronavirus.

“It was a really harsh reminder just how tenuous this situation is, trying to play baseball during this pandemic,” said Doolittle, the Nationals’ closer.

Sports are the nation’s great escape from the pressures and realities of everyday life. But there was no escape provided here. What took place Thursday night was baseball as a science experiment, taking place in a sensory-deprivation tank.

Though the grass was a brilliant green and the air a sticky summer blanket, the building itself, devoid of fans, concessions and energy, had the feeling of January, when everything is quiet and the first crowds of the year are still just a rumor off in the distance.

Towering stacks of plastic-sealed cardboard boxes lined the lower concourse in the bowels of the stadium — the 2020 stadium giveaways for a different sort of season. “Davey Martinez 2020 Bobblehead,” read one stack. Perhaps the Nationals manager at some point can tear into a box to snag one as a keepsake.

Thursday night was not only the first baseball game of 2020, it was the first regular season game for one of North America’s four major sports leagues, with MLB essentially serving as a bellwether for the National Basketball Association and National Hockey League, which begin in the coming days, and the National Football League, scheduled to kick off in September.

It will be a miracle if it all comes off as planned, given all we are dealing with and all that can still go wrong. There are no guarantees baseball will reach the finish line of a World Series in October. But as Thursday night at Nationals Park proved, miracles do happen.