With American tourists banned from Italy, Amalfi Coast workers are sliding into poverty

AMALFI, Italy — For 15 years, he’d worked in the kitchen of a luxury resort, overseeing the dishwashers, keeping ingredients stocked, making sure the guests in 1,200 euro-a-night rooms could order seafood spaghetti at any hour.

But this summer has brought only a trickle of guests. The hotel is operating with a skeleton staff. At his home five miles inland, Ninfo Falcone, 43, is contending with unemployment however he can: by dipping into his savings, building a small greenhouse, buying pigs and rabbits to raise, and occasionally taking a load of vegetables to sell in town.

“I went from five-star-hotel work to cultivating a patch of land,” Falcone said.

Once operating behind the scenes of near-paradise, cooking the meals and washing the sheets, the workers of the Amalfi Coast now stand as a painful example of what can happen when borders are tightened, international travel collapses and tourists from hot spot countries — particularly Americans — are frozen out. 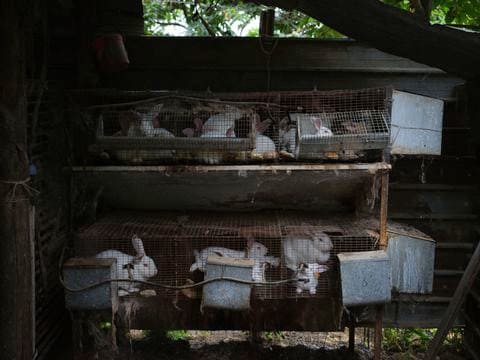 In one cliffside town after another, unemployment has exploded. Hotel and restaurant staffers who had catered to honeymooners, tycoons and Hollywood stars are sliding into poverty. Some are leaning on relatives for help or scrambling to find alternatives. Others, in deeper despair, have turned to charities and local town halls for food handouts.

“It’s been an economic tragedy,” said the Rev. Francesco Della Monica, whose chapter of the Catholic charity Caritas had never until this year received requests for help from residents of the coast.

For the vacationers still fortunate enough to come — mostly Europeans, and Italians on weekend trips — the lack of crowds has made the Amalfi Coast even more alluring. But workers are bearing the cost of that change. Some of the reopened hotels and restaurants are offering staff positions only off the books or at reduced wages. Taxi drivers sit idle for much of the day and extend their shifts past midnight to earn just a portion of what they once did.

“Look at this guy,” one driver at a taxi stand said, pointing to a colleague with bags under his eyes. “He’s been awake for 23 hours.” 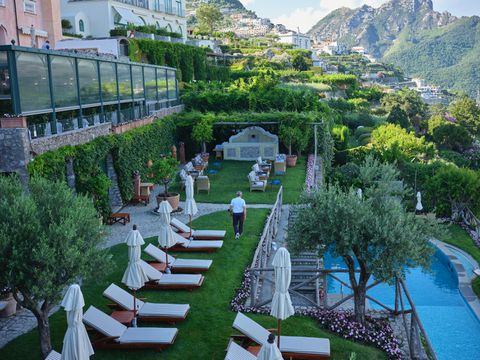 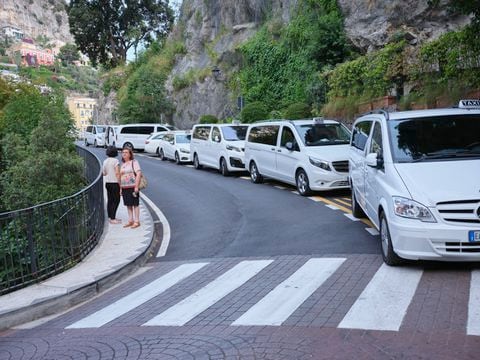 TOP: The Palazzo Avino hotel in Ravello reopened on July 15 with half of its staff. ABOVE: Taxi drivers in Positano have few customers. (Federica Valabrega for The Washington Post)

Even those with seemingly idyllic jobs, such as Vincenzo Parlatore, 39, an Amalfi beach attendant, have stories about how their lives have been ruptured. During a lunch break, Parlatore said he’d found his job only weeks ago, a last-ditch option after months of unemployment. He had “practically zero” money left, he said. Since the winter, three of his four children had celebrated birthdays; none had received gifts.

“And now my wife’s birthday is coming up in two days,” he said quietly.

He spent last summer guiding wealthy tourists on 1,800 euro boat tours, and he started this year with a plan to launch a similar tour business of his own. Just before the pandemic began, he bought a boat, an investment that became almost immediately useless.

He took out his phone, showing text messages he’d exchanged with creditors who wanted a slice of his first paycheck: 600 euros for boat insurance, 400 euros to a shipyard.

“I’m not sleeping well,” Parlatore said before returning to duty at the beach. There, striped umbrellas stretched out in socially distanced rows. Vacationers skipped into the water. “I’m jealous of the chance to be carefree,” he said. 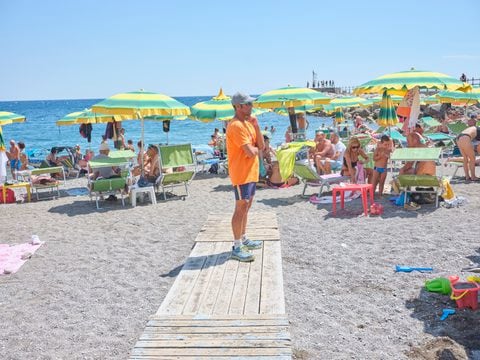 Vincenzo Parlatore said the stipend he earns as a beach attendant is not enough to sustain his family or pay his debts. (Federica Valabrega for The Washington Post)

There is not yet any sense of when tourism or the region’s workers might recover. That will depend to a large extent on how quickly the United States can bring the virus under control and persuade Europe to let Americans visit once again.

In some tourist-dependent parts of Italy, domestic travelers have made up for some of the losses. But the Amalfi Coast, which grew over the decades into a vacation empire, depends on people coming from far away — people splurging on once-in-a-lifetime trips, or those with the money to come every summer. In a normal year, foreigners outnumber Italians almost six to one.

Americans are by far the most important nationality for the area, according to regional government data, accounting for 25 percent of the total visitors to the province of Salerno, home to the Amalfi Coast. More than 40 percent of the people who last year checked into five-star Amalfi hotels were from the United States.

“It is a painful void,” said Corrado Matera, the regional government head for tourism.

In June, with Europeans again able to travel between countries on the continent, tourism in the province was nonetheless down 80 percent. The Amalfi Coast now fills up on weekends but has a sleepier, neighborhood feel otherwise. 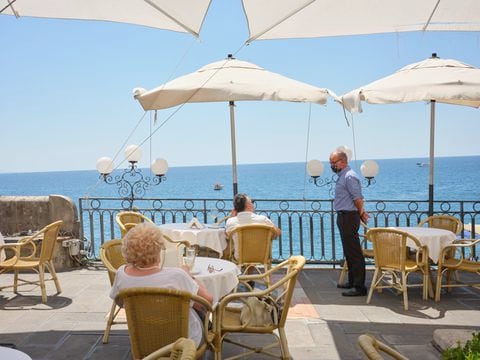 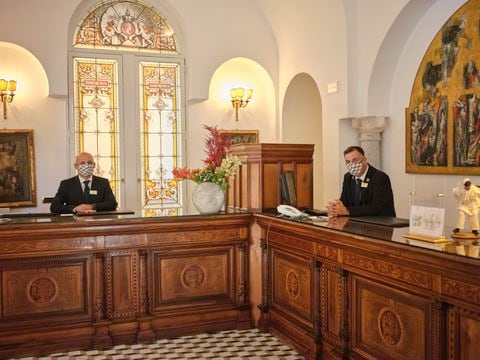 TOP: Without cruise ships operating, the Gran Caffè in Amalfi has lost much of its clientele. ABOVE: Clerks wait for guests to check in at the Palazzo Avino in Ravello. (Federica Valabrega for The Washington Post)

The Italian government has launched a program of subsidies and benefits aimed at tourism workers. But most unemployed people on the Amalfi Coast say those benefits are fractional at best, amounting to several hundred dollars per month. Stanislao Balzamo, a community organizer, said the process for determining who is eligible has been uneven and “chaotic.” Some have received nothing.

The Amalfi workforce is mostly local — people born and raised in the villages — and people tend to work seasonally, depending on large spring and summer paychecks while getting by on smaller unemployment benefits in the winter. But amid the pandemic, workers say the wages for spring and summer jobs — the few available — are falling. One room cleaner, who spoke on the condition of anonymity for fear of being fired, said she’d been at the same five-star resort for 30 years — what used to be salaried work. Now she is being called in on a day-by-day basis and is working less than half the normal time.

“I feel very let down,” the worker said. “The hotel never did this before. For me, it stinks.”

Nicola Vollaro, 64, had been a night porter at a five-star hotel, earning a monthly salary of nearly 1,500 euros and collecting tips from a clientele he said was almost entirely American. Now, he has gone months without a paycheck.

Shaving and putting on a crisp shirt, he has gone town to town and door to door with a résumé in plastic sheeting. Among 30 restaurants and hotels, he received an offer at only one, where the monthly pay was 700 euros.

Nicola Vollaro rides a bus from Amalfi to Positano in search of a job.

The 11 miles between Positano and Amalfi can take hours to drive in peak season. This year, the trip is much quicker. (Federica Valabrega for The Washington Post)

LEFT: Nicola Vollaro rides a bus from Amalfi to Positano in search of a job. RIGHT: The 11 miles between Positano and Amalfi can take hours to drive in peak season. This year, the trip is much quicker. (Federica Valabrega for The Washington Post)

“It’s a crisis, and this is the best I can offer,” Vollaro remembered the restaurant owner saying.

One afternoon, he bought a 2 euro bus ticket to Positano, known among workers as the Amalfi Coast town with the wealthiest tourists and best wages. He’d heard from a friend that a small company that delivers supplies to hotels and restaurants might be hiring.

“This is the last step before desperation,” Vollaro said.

A ride that can take hours in normal times took 30 minutes. Out the window, he could see all the reasons that people visit: the alluring beaches at the bottom of rickety stairs, tiny plots of farmland with plump lemons, luxury resorts that seem to be nailed into the sheer rock face.

Vollaro got off at his bus stop, holding a slip of paper with the company’s address. The search for it took him higher and higher, up one flight of steps and then another, until he was far from the tourist zone. Above, clouds cupped the mountaintops. Below, the few boats in the bay were only specks.

He came to a winding road and at last found the company. The owner was out front. Some workers were loading crates of bottled water onto a flatbed truck.

Vollaro told the owner he was looking for work. Their conversation was short.

“They’re looking for somebody younger,” Vollaro said a moment later, walking away. 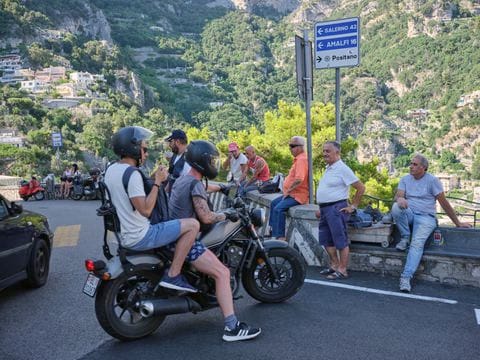 “I’m too young to retire and I’m too old to work,” said Nicola Vollaro, seen here second from right at the wall, waiting for a bus leaving Positano. (Federica Valabrega for The Washington Post)

Even if he could do the job, it paid barely anything — 700 euros per month.

“I’m too young to retire and I’m too old to work,” Vollaro said as he headed back down the hill.

Zigzagging along Positano’s switchback roads, passing one shuttered hotel and then another, he complained that the town had become a “tomb.” He chatted with a restaurant owner who told him she’d hired back only two of her 16 employees. He pointed out spots where he’d already knocked, looking for work, finding nothing.

“Enough with this place,” Vollaro said, and he thought about whether the next step might be to search elsewhere, to move away from the coast, to give up on tourism, at least temporarily. “I’m done with this,” he said. 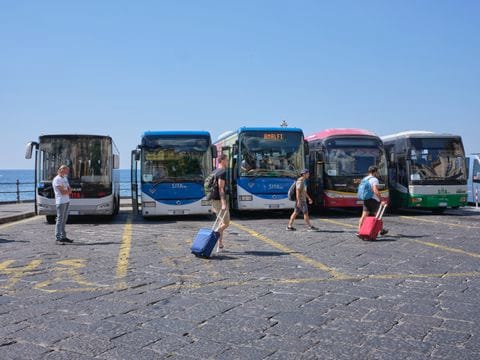 There are fewer tour buses than usual in Amalfi, and their capacity has been reduced from 40 to 20 to accommodate social distancing. (Federica Valabrega for The Washington Post)
Source:WP